App Army Assemble: Bring You Home - a puzzler to bring home to mother?

You'll either love it or hate it

We're back again with this week's App Army Assemble. This time we've taken a look at Alike Studio's Bring You Home, a striking sliding-panel puzzler about rescuing your alien doggo.

Fans of Alike Studio's previous tale, Love You to Bits, will feel right at home with this one, though it's not a rehash by any means. Sometimes logical, sometimes trial and error, these puzzles will certainly have you scratching your head.

What did our App Army think of it, though? Well, let's take a look.

Some people might be turned off by the trial and error often required to solve a puzzle, but most of the time I found the choices to be quite intuitive. When I need to climb a cliff to continue pursuit, for example, there's no way I'm going to use the tail of a giant beast instead of a reinforced, ladder-esque vine.

The joy of playing this game is in the attempting of various combinations and watching how the characters change their interactions with each other, based on what was swapped. The fact that the characters interact differently with each other based on your swaps often brings "Aha!" moments along with the laughs.

If you play this straight through, successfully solving each puzzle every time without failure, you’d miss out on more than half the fun and amusing animations. In addition, there are auto-collected photos to find, and some achievements you can only get by failing, so the game actually encourages you to see and do it all.

Swapping gets more and more complex as you progress, and there's no 'skip', but you'll never be stuck for too long as you can eventually trial-and-error your way out of everything. There are only so many combinations available, after all.

One game setting I really appreciate is the ability to turn off the music, the sound effects, or both. The game ran very smoothly on my iPad. No crashes or glitches, very polished!

I highly recommend this game if you like light logic puzzles combined with interactive movies, where the game can play you as much as you play the game. I'm about half-way through and I will definitely be playing through to the end!

Paul Manchester (iPhone SE, iOS 11)
Bring You Home is a gorgeous puzzler that is brim full of character. I really like the art style and simple pick up 'n' play style of the game. It's very well suited to mobile screens and short on the move sessions.

Unfortunately for me the trial and error element of the puzzles became a turn off pretty quickly. To be honest if they had been logic based puzzles I think they would have struggled to stretch the game length out and increased difficulty, but this alternative I find frustrating and tiresome. Good effort but flawed mechanics.

The art style delivered as expected for me. It has strong tones of something my daughter might throw down on paper so it immediately struck a chord in my heart. The style also lends itself well to the utterly silly "death" sequences that kept me giggling even through my early angst with what I perceived to be pure tedium...more on this in a bit.

The music and sound I honestly could take or leave. There is a sense of a continuing score that elicits the feeling of an adventure, but it didn't always fit the on-screen action in my opinion. Although when it did change in sync with a death it was brilliant. It certainly has a class and sheen that may not always come with a $2.99 title.

The game eases you into the mechanics quite well and delivers you into the story with a running start. That start then quickly hits a wall and you may or may not then hit your device. I found myself simply scrolling through options and quickly hitting the rewind button when things began to go astray. You will almost assuredly reach a point of deja-vu with the options in any given level.

I didn't find terribly logical answers in the most infuriating levels and this tends to quickly turn me off. Then you complete a level and jump around your room with glee and sit back down determined to try the next level. Then you get to level 10 and mechanics change slightly and something peculiar begins to happen. I'm still playing it. Do I love it? No. Do I like it. Maybe.

I truly want to know what happens to that odd creature from the beginning scene and I hope I make it to that point. If I force myself to look through the lens of someone who seeks out puzzle games and a goofy (if not diabolical at times) challenge then I get it.

If you like puzzle adventures and think you have the required tolerance for trial and error you should probably give it a try. 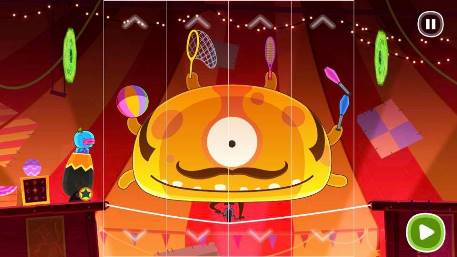 Tiny Thief and Love You To Bits are held in absolutely high regard by me as one of the best point-and-click adventure puzzles ever released for iOS. This time around Alike Studio opted for a new game mechanic which has you control the environment rather than our protagonist.

You have to re-arrange the panels, which divide the screen into several areas by sliding them up/down and/or switching their places altogether. This gets trickier as you make progress through the game, because panels increase in number and sometimes you'll have to use the same panel twice.

The main downside for me is there's a lot of trial and error and almost no chance of figuring out the puzzle logically. The signature art is there, cute characters seem to have gotten even cuter, collectible snapshots evoke an insurmountable feeling of empathy, and my Retina screen is bursting with color gamut, but unfortunately all these are not enough to bring home the idea of trying out different combinations of panels time and time again.

I think this game is best suited for spending some quality time with the little ones, since BYH is more of an interactive children's book than a puzzle adventure per se, which made me fall in love with their earlier works in the first place.

After playing Bring you Home I clearly feel that devs made a good choice changing game mechanics from a point & click to this "slide" one. Love You To Bits was funny but remembered the Tiny Thief formula too much - there were no changes, aside from graphics and story.

Instead, in BYH we have this new game system that give new life to a little bit of a slack genre. The game is really good, mostly for all adventurers out there.

The screen is divided into sections which can be spun like one of those number padlocks. The sections can also be swapped with other sections like the game Framed. Playing to complete the levels won't take long. I did 20 levels on my bus ride home, but the charming bit of the game is when you try a combination and are given fantastic failure animations which are different depending on the combinations you are trying.

This gives the short game extra longevity as the different animations don't fail to make you smile, and I found myself trying all the combinations even though I knew the correct one for that level. The game isn't as challenging as Tiny Thief or Love You To Bits, but the charm and the animations are worth the price of admission alone. Highly recommended.

I found it to be challenging without impossible or too frustrating. There really isn't anything that I don't like about this game, and I generally don't like cartoonish offerings like this. It is a friendly, pleasant, moderately challenging diversion that reminds me a great deal of Framed, which is a favorite. Highly recommended. 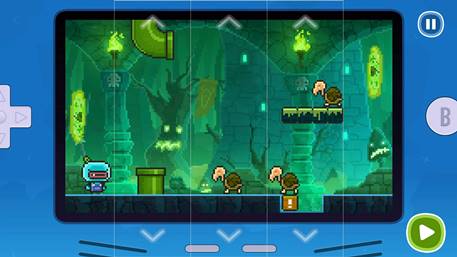 It's less of a traditional game and more of an experience which sees you bumbling your way around via trial and error, or picking up the mostly simple logic governing each level. There's very little skill involved which casual gamers or parents looking to distract young children may find a boon, but those who enjoy being driven to tears of frustration won't find their fix here.

Personally I enjoy the occasional simple, gorgeous and well-designed puzzling experience which Bring You Home excels at. Putting it firmly it's in what I'd call the 'hungover Sunday' category of games. Put succinctly it's a triumph of style over substance, and yes you did read that correctly.

I quite enjoyed Bring You Home. For me, it felt like an amalgamation of Causality and Framed. You don't really know what's going to happen at each stage so it is a very trial and error type game.

This might be your cup of tea based on that, but you may also prefer to think about things logically (probably not the game for you if that’s the case). I wouldn't say this is much of a game for the budding strategist, but it's a fun little time killer.

This is a great puzzler. It involves moving the scenery up and down and side to side in order to get the alien from one vortex to the next. It sounds simple enough, but some of the puzzles are not as straightforward as others, and are so illogical that you end up trying every conceivable combination until you hit the right one.

In most games this would be a reason to quit and delete, but in this game you just have to keep going to see the crazy scenarios that result from your decisions. I don't know how many levels there are but I know I'm going to continue the crazy journey and help the alien bring his pet home.

Quick verdict? The game delivers the fun you've come to know and love from these developers.

It's a beautiful game. Very colorful and a visual feast for your eyes in terms of the cute art style as well. You'll love the simple controls and well-made puzzles that require you to shift around different pieces of each until you find the perfect combination to escape that scene.

I had a lot of fun with it and I'm sure most people will. My only issue might be that there seems to only be one specific way to solve each puzzle which is too bad as I'm sure players would have liked to find other ways to succeed.

The puzzles are quite simple, but don't underestimate its level of difficulty. The soundtrack is really what I enjoyed the most in this game. It reminds me of something related to open world adventure games like Ravensword or Shadow Sun.

The graphics are quite like Animal Crossing-type of games and what you can see on portable consoles such as Nintendo DS and 3DS.

What is the App Army? The App Army is Pocket Gamer's very own community of mobile game experts. Each week, we provide them with a bunch of free codes and early access to the hottest upcoming games so they can provide their thoughts in features like this. We also host regular community-driven events with them in mind like tournaments, giveaways, and multiplayer evenings. To join, simply follow this link to the page on Facebook and request access. We'll get you in right away!
Next Up :
App Army Assemble: Where's Samantha? - "Does this puzzle-platformer spin a good yarn?"