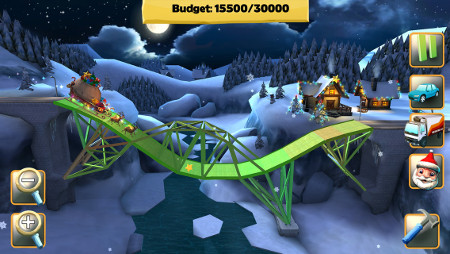 Bridge Constructor has been updated with some new winter-themed levels. Y'know, because it's cold outside and we're all in the grip of rampant consumerism.

The update adds a new Winter World with a bunch of new levels that see you trying to get Santa's sleigh across a series of fiendish gaps. I thought Santa's sleigh could fly, but apparently I've been grossly misinformed.

The new content is completely free, but you'll only be able to download it until spring hits next year. So you've got time, but I think it'd be pretty weird playing Santa-themed levels after December, so maybe get in there quick.

At review we said "with a pace and style all of its own, Bridge Constructor is a great example of a bit of realism improving a game," and gave the game a Silver Award.

And what's more realistic than levels based around a magical present-giving saint?