Most of the time Braveland bumbles along, ticking the right strategy boxes but never managing to really spark into life.

What it does is neat and tidy. It's presented with cheeky aplomb; its UI is cheery and functional; and its mini-battles scratch an itch in a reasonably pleasant way. 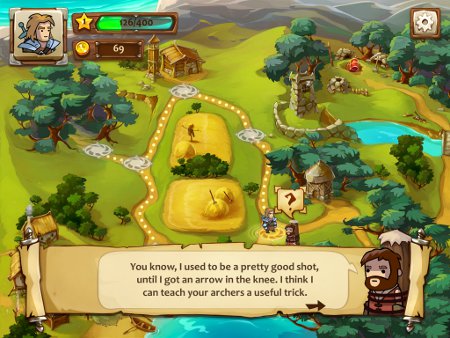 Seriously? Are we still doing that joke?

The game tells the story of a young warrior on a trail of vengeance. Except instead of smashing things himself, he hires a variety of fantasy archetypes to fight his battles for him.

You gain extra followers as you work your way around the map, fighting battles at some points and learning new powers and gaining new units at others.

The turn-based battles take place on hexagonal grids - your troops are at one side and your foes are at the other. Each unit can move and attack in its turn. Some can use special moves, too.

Different units have different strengths and weaknesses, so you need to learn the best way to use them, especially at the harder difficulty settings. 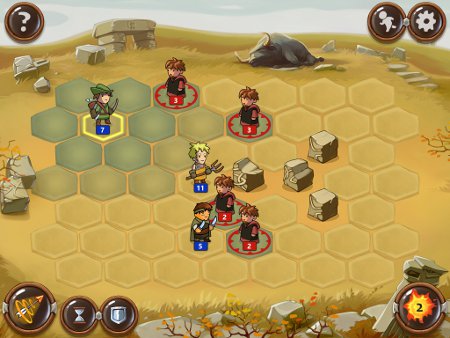 In this scene, I appear to be beating up a boy band

The progression is well weighted and the balancing is perfectly adequate, sure, but you never really feel like you've achieved anything when you chalk up a victory.

That absence of memorable or even different fights is particularly telling. And while you do need to adjust your tactics to suit the enemies with which you're presented, there aren't really that many tactics between which to shift.

Braveland doesn't have anything spectacularly wrong with it, and you won't mind spending a few hours in its company. But it doesn't do anywhere near enough to mark it out as an essential purchase.

Braveland does a lot of things perfectly adequately, and it's sometimes pretty fun, but that's not really enough to make it stand out
Next Up :
Happy Game review: "Don't worry, be happy?"

The best iOS and Android deals of the week - Deliria, Braveland, Kathy Rain, and more