BotHeads looks a lot like a less-impressive version of Badland. But don't let you put that off – there's actually an interesting and engaging game here under the slightly wonky looking graphics.

Sure, it follows a similar pattern to Badland. You're bouncing through levels, collecting things, avoiding spikes, and doing your best not to die, but there's more to it than that.

And it doesn't take too long to reveal itself. Thanks to a slick control system, this is one game that definitely deserves a second look.

You're in control of a pudgy little robot. You have a button to move left and a button to move right. When you realise you can push them both at the same time to go up, things start to get more interesting.

The aim of the game is to get from A to B, collecting as many glowing orbs as you can along the way. You're weaving through silhouette levels, avoiding all the things that are trying to kill you.

But there are things there to help you as well. Paddles bat you gently in the right direction, and bounce-pads twang you off past otherwise difficult-to-dodge hazards. 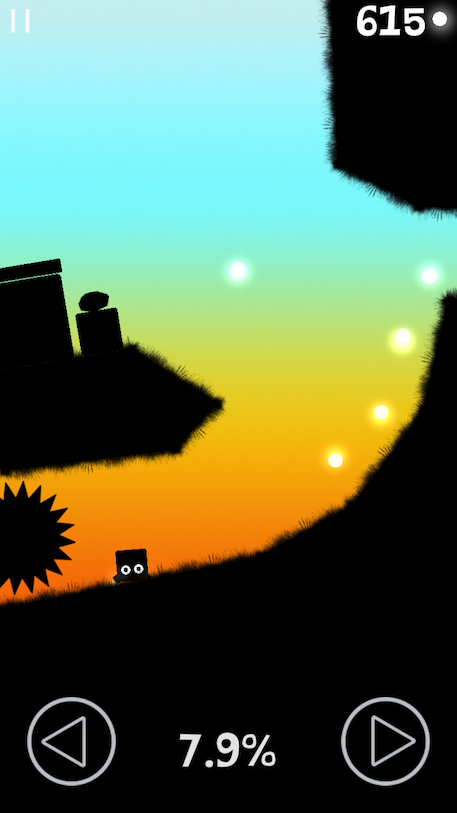 And it all moves along at a pretty lovely pace. Die though, and you're sent back to the start of the first level. Unless you've collected enough orbs, then you can spend them to continue.

Dying is almost always your fault. Which makes the choice that little bit more pressing. You want to move on, but do you want to head back to the start because you know you can do this in one go.

There's a subtlety to the game that belies it's slightly rough-around-the-edges style. And those controls, like a mix between a platformer and a flappy clone, are really something special.

There's not a huge amount to the game, and it does run into the age old problem of repetition after a while. But by that time you'll likely have sucked enough fun out of it that you won't be too bothered.

A pleasant and engaging mix of ideas with a super strong control system
Next Up :
Xiaomi 11T Pro review - "Pro in name, pro in nature"