KLab Inc. has announced an exciting new update for Bleach: Brave Souls, offering players tons of fun-filled events with its 7th Anniversary Bankai Live. Airing on Sunday, July 17th, the 3D action game's broadcast will celebrate the 7th anniversary of the title with exciting news, fun challenges, an announcement of winners and more.

In Bleach: Brave Souls' 7th Anniversary Bankai Live, players can look forward to the announcement of the "Who would you spend summer with?" campaign's top three swimsuit characters. With Yoshiyuki Hirai from America Zarigani as host, the broadcast will highlight Masakazu Morita (voice of Ichigo Kurosaki), Ryotaro Okiayu (voice of Byakuya Kuchiki), Noriaki Sugiyama (voice of Uryu Ishida) and Fumiko Orikasa (voice of Rukia Kuchiki).

Players can stay tuned to the live airing to get first dibs on special news about the game itself, along with Special Move Animations, a Co-Op Challenge, a Quiz Raid, a Brave Souls Sorting Game, a Brave Souls Matching Game and more. 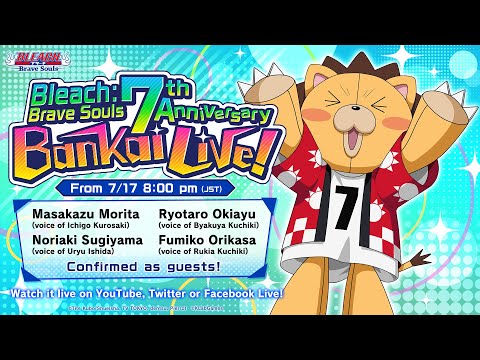 In addition, the Bleach: Brave Souls 7th Anniversary Bankai Live RT Campaign lets players retweet the livestream to get a chance to be one of 7 lucky souls who can score a Bleach: Brave Souls original canvas board - the best part of it all is that it's signed by the voice actors in the studio.

If you're keen on joining in on all the fun, you can download Bleach: Brave Souls on the Google Play Store for Android devices and on the iOS App Store. It's a free-to-play game with in-app purchases. You can also visit the official website to learn more info about the game, or join the community of followers over on the official Twitter page to stay updated on all the latest developments.

Are you on the hunt for more similar titles that will put your skills to the test on your mobile device? Why not take a gander at our list of the best iOS action games?