Black Desert Mobile is easily the most highly anticipated mobile MMO of the year, boasting incredible visuals, a believable world, and dozens of hours of quality missions and storytelling. Pearl Abyss' long-awaited port has finally launched today for iOS and Android after earning a whopping 4.5 million pre-registrations. 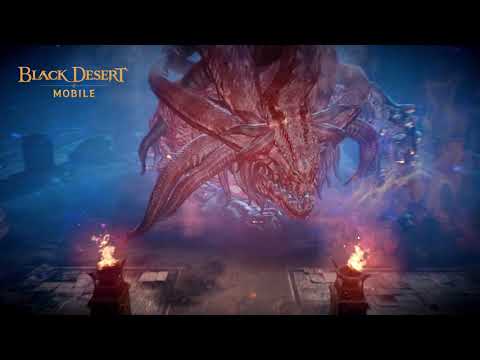 Before you begin your epic quest, you'll first need to select which class you wish to play as. There are five, and they're all surprisingly distinct in their approach to combat. You've got the Warrior, Witch, Ranger, Giant, and Valkyrie, and each one can be customised down to the most minute of details thanks to the game's incredible character creator.

Being an MMO, Black Desert Mobile is a very social experience, offering a staggering amount of multiplayer and PvP content, including the intense 3v3 mode names Ramoness Arena. There are also extensive co-op boss raids to take on once you've acquired the requisite gear and EXP, and working together as a team to down huge bosses, win loot, and complete tricky quests is super satisfying.

Upgrading your Life Skills is a big part of progression here, with areas like gathering, fishing, crafting, trading, and dyeing fabrics being vital to gaining helpful resources. These can then be used to build and expand your very own camps, as well as hire NPCs to work for you.

On top of all that, the Black Spirit Mode, an extended auto-mode, allows you to earn rewards and EXP without eating through your battery or precious data.

Items will be given to players to celebrate astonishing achievement of 4.5 million pre-registration, and it includes a Bunny Bunny Ornament, Memory Fragments, Skillbooks, a Tier 1 Horse Emblem, a Verdon Outfit Chest, Krenvatz Barding, and some delicious Chicken Soup to boot.

If you’re an Amazon Prime member, we have some extra good news. Pearl Abyss is launching a special campaign in the partnership with Amazon and until mid-March 2020, any Amazon Prime member in the countries that the global version of Black Desert Mobile is launching can claim their rewards. Simple login to Amazon Prime account by using event tab in the game gives players in-game items like Lollypop Glasses, Good Black Stones, and Boss Stamps.

If you're looking for your latest MMO fix, you'll find the stellar Black Desert Mobile available for download now from both the App Store and Google Play.