I had a go on Beyblade: Evolution for the 3DS recently - a game its publisher Rising Star Games assured me will contain an all new way to play for Beyblade fans.

But, focusing as it does on the more on the physical act of playing a round or two with the spinning top toys, it looks like Evolution will primarily appeal to fans of the franchise.

However, those fans should be very well-served indeed. Beyblade: Evolution contains several gameplay modes, stories recreated from the TV show, and a great deal of trivia and stats from the series for 'Bladers to geek out on. 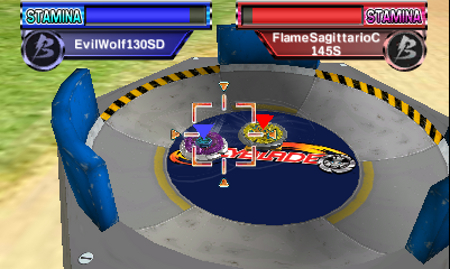 There's a fair amount of physicality to the action, which is a good thing since the physical game of Beyblade involves launching a spinning top. Doing this virtually with a yank of the 3DS towards you works well.

In the actual physical game, you can't really exert much influence over the Beyblades beyond choosing the spot you'd like them to start spinning on.

In Evolution, by contrast, you can also fire Bey Spirit at them, which makes them more powerful. Like the launching, this aspect of the game is handled via the motion sensors of the 3DS, as you tilt to adjust your aim.

The other element of "skill" - if you can call it that - comes from the construction of the Beyblade itself.

It's here that Beyblade: Evolution starts to show its true promise. 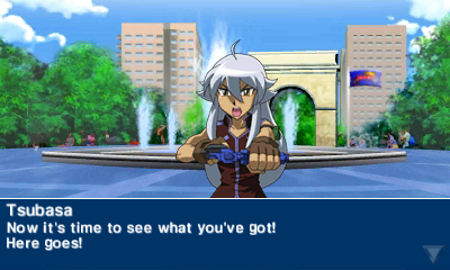 You purchase parts for your Beyblade using BP, earned through battles you'll have along the way to the Beyblade World Championships. It looks like loads of parts will be available for purchase, all of which are based on the toy line. These parts are all minutely detailed, and you can view them from any angle.

Each component adds to your attack power, defence, and stamina, and results in a meta game where you create a Beyblade that suits your particular style of play. Once a part is unlocked, you can also look it up in the comprehensive Beypedia.

After you've constructed your spinning top, you go on and participate in more battles with competitors in the single-player mode to earn more BP with which to buy more parts. It's a simple cycle, but an enjoyable one.

However, you can also set the Beyblade you construct to be sent via StreetPass, which then battles opponents you pass in real life. It's practically built for the playground.

This mode, and the game in general, is aimed squarely at Beyblade fans. The Beypedia is a great repository of knowledge, is well-presented, and encourages that fascination with a hobby you only have time to experience when you're young. 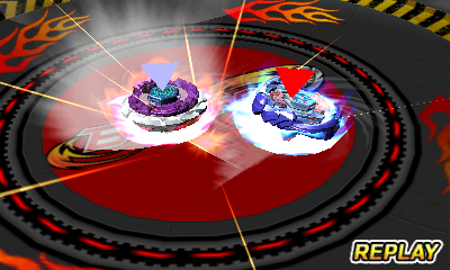 We doubt Beyblade: Evolution will recruit non-fans of the series. You need a decent knowledge of the Beyblade universe to fully appreciate the game, and its action is a little too simple.

It's also not without its faults in the presentation department. The 3D effect is subtle, and highlights the small parts of the Beyblades really well. But the effect is lost when you have to physically move the device about.

The menus could be a little clearer too, though they're fine once you've got to grips with them and know your way about the game. The quality of the music is fine, but it does cut between scores abruptly and repeat too often.

Fans of the toys (and parents of fans of the toys) take note: this looks like it'll be right up your top-spinning street when it become available in European and American stores on October 25th. For everyone else, best stick with Pocket Gamer and read the full review before making a purchase.