Beat Street is a game about punching. And kicking. And pulling off cool super moves. It takes its cues from the likes of Streets of Rage, but wraps everything up in a far cuter setting.

The twist is you can play it with one hand. Now we've all seen mobile games claiming that they've perfected the touchscreen brawler before, and we've all been horribly burned by them.

But I'm here to tell you that Beat Street gets things just about perfect. It's slick, it's fun, and while it is challenging, it manages to never feel completely overwhelming.

The game sees you controlling a plucky hero. You're trying to clear the evil anthropomorphic animals out of your city. You do that by mangling them with violence.

You move your thumb around the screent to move. Tap when you're close to an enemy and you'll unleash a volley of kicks and punches.

Walk directly into a foe and you'll grapple them, letting you get in a few hits, or toss them into the path of their friends. But that's by no means the end of things. 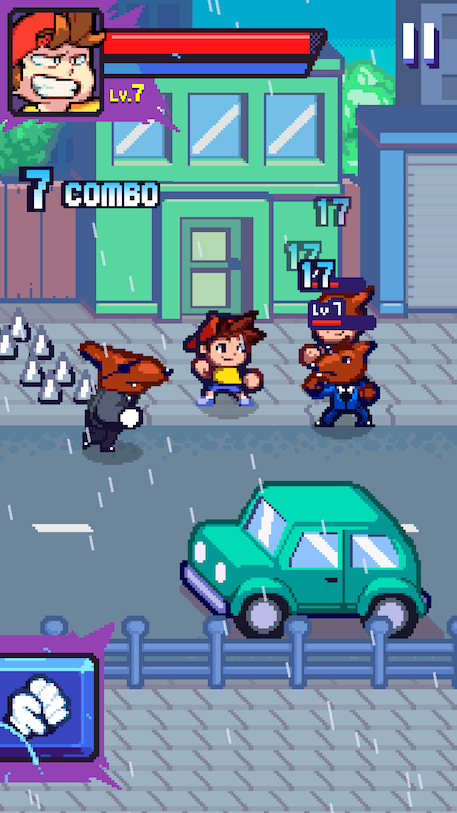 Stringing together combos fills up a bar. When it's powered up, you can unleash your super move. But flying kicks and dashing punches also use up your power bar, so you need to balance your various forms of offence.

The levels are a little on the repetitive side, but they do throw in environmental hazards to keep you on your toes. Sometimes you're dodging cars, other times there are spikes you need to avoid while punching your enemies.

And that's the beauty of Beat Street. It manages to feel like the games it's aping, while still fitting perfectly into your pocket. Every move you make is a move you've told the game to perform, and that's really satisfying.

There are a few niggles here and there, including an energy system and a bit of grind, but when the core of a game is fun, those are things that are reasonably easy to look past.

And trust me, the core of Beat Street is an awful lot of fun.

Don't let the simplistic nature of the game fool you, this is a beat-'em-up that's well worth playing
Next Up :
REDMAGIC 8 Pro review - "A beast in performance, but not without growing pains"