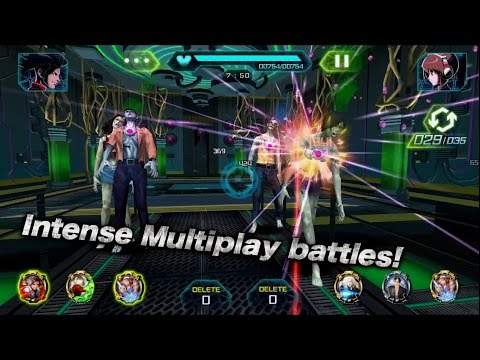 If all you want for Christmas is a free to play lightgun-style blaster for Android that's tangentially linked to the King of Fighters games, then you're in luck, because SNK has just released BEAST BUSTERS featuring KOF on the Google Play Store.

The game is a simple FPS that sees you playing a spiky haired zombie-killer. You move a targetting reticule with the left of the screen and fire by tapping on the right. Shoot a load of zombies, earn some coins, move on to the next levels.

The KOF gang appear as Fighter Cores, which are essentially buffs and boosts you can use when you're fighting. You can have three equipped at any one time, and there's a card-battler style levelling up system that lets you mash them together to make them more powerful.

There's a single player campaign and some multiplayer options to sink your teeth into as well.

Everything is very free to play, with currencies and energy systems galore, but the shooting is reasonably satisfying in a tappy tappy slaughter sort of a way.

You can grab the game for free right now on the Google Play Store, and if you don't mind a pretty angry monetisation system you'll probably find a lot to like here. I guess.