Battlejack takes the shape of a simple card-battler RPG, and then in the same movement makes it more involved and less daunting.

Most of the mechanics here are going to be instantly recognisable to anyone who's dabbled in the genre before, but there's something interesting bubbling just under the surface.

And that's blackjack. You're trying to hit 21 with a deck of special cards in order to do the most damage to your foes, and it works pretty darn well.

The game sees you building a team of elementally-infused warriors, then setting out to do battle against the forces of evil. So far so standard.

But each battle sees you flipping cards. The four different suits in the deck represent the elements of your attackers. Then there are the numbers, which turn the whole thing into a game of pushing your luck.

Depending on the make-up of your team it's entirely possible to flick out some cards that are of no use whatsoever. Then you push on to try and make 21, which gives you a huge attack for everyone. 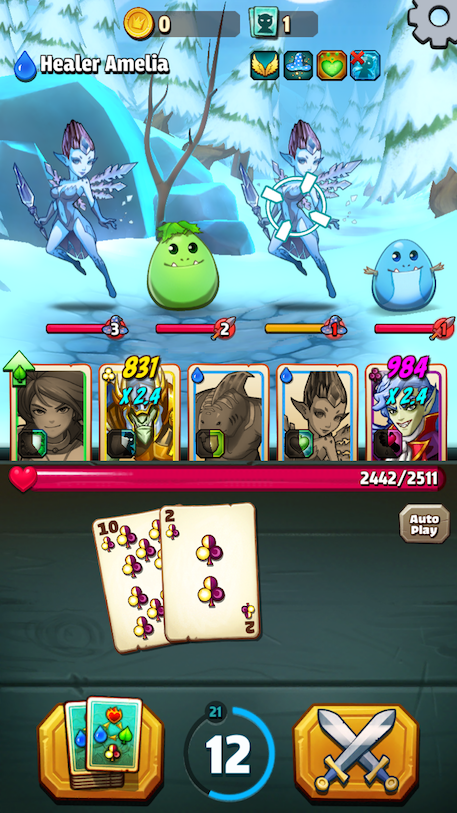 It's a smart system, and it makes you think about the allies you need to take out with you on each fight. Different heroes have different sizes, and you can only take so-large a team on a single mission.

The heroes have special moves that fill up as they do damage, and you can use these to change the flow of fights. Some let you draw specific cards, others buff your team. Others just let you smack monsters in the face real hard.

There are chests to unlock, new characters to find, and plenty of quests to complete. And even though the game is still decidedly random, the fact that it's you who's choosing whether to go deeper into that randomness gives it some semblance of balance.

But there's still a whole bunch of fun to be had here. The battles are fast-paced, the rewards make you want to push on to see what you'll get next, and it always feels like you're making progress.

Yup, it's just blackjack with some monsters thrown in, but it works really rather well. If you like your RPGs simple, laid back, and a bit clever, then this is well worth checking out.

A clever card-battling RPG with enough of a twist to make it stand out from the crowd
Next Up :
Hero Emblems II review - "Lovely visuals and music, but match-3 combat lacks strategic depth"