Out at midnight: Battle Riders is a gritty, action-packed racing game for iPad and iPhone 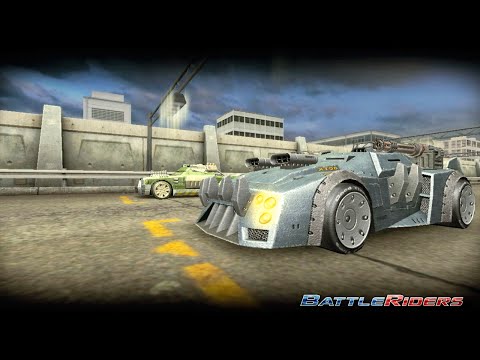 Battle Riders is an oil stained, spiky racer that's just hit the App Store in New Zealand. That means it should be popping up in the UK at around midnight tonight.

The game sees you driving an armoured muscle car in a series of races. You've got guns, you've got spiky bits, and smashing into your opponents is highly encouraged.

You steer by tilting your device, and shoot with a couple of buttons on either side of the screen. There's a brake as well, in case you're into that sort of thing.

Everything feels chunky and angry, from the boxy cars to the glowing power-ups you drive through. It's Mario Kart by way of Mad Max. It's like we're back in the 90's again. And it's a decent amount of fun.

If that sounds like the sort of thing you want to spend your entertainment budget on, then keep an eye on the App Store later today when Battle Riders should pop up for £1.49 / $1.99.