Hands-on with Avoid Droid - a fruity, retro-inspired avoid 'em up for PS Vita

You think of the cute and fun worlds of Rainbow Islands and the neon corridors of Pac-Man, not the washed out gunmetal greys that modern games seem to be obsessed with.

The game is a throwback to that simpler and brighter era, but to call it "old school" would do it a disservice - this is a thoroughly modern creation, albeit one with a streak of retro rebellion coursing through its fruity veins. 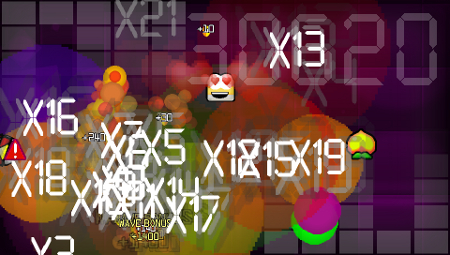 Though a few modes are on offer, the two I went hands-on with during my preview were an endless one, and a level-based affair.

The core of the play is the same, mind. This is a pacifistic shmup that verges on bullet hell at times, thanks to the number of enemies and projectiles chucked in your direction.

You must avoid the baddies, dodge their rockets, and navigate past their lasers, all the while collecting coins and fruit for as long as you can survive, with high scores then populating a global leaderboard.

It's only when you start progressing through the levels that you're introduced to the minutia of play. Some stages restrict you to only moving vertically, some constrict the area you can move within, and others will have you engaging with the enemies in ways you didn't previously consider.

Here's a great example: you only need to take one hit before dying, and so your instinct is to stay far away from baddies. But one of the levels encourages you to brush right up against the enemies to get bonus points. 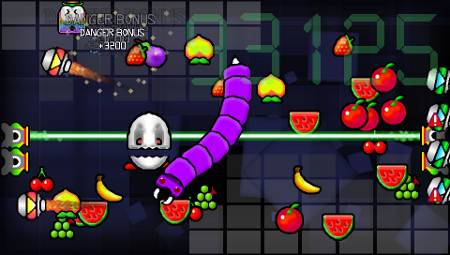 There are currently nine different control systems in the game, but the developer informs me that this will be further honed down.

I only experienced the tilt controls, but can confirm that they already feel perfect - you have enough acceleration to dash out of the way of projectiles, but not so much speed that the game feels jittery.

With immediate gameplay that hides hidden depth, it's clear that the works of arcade heroes of yore are inspirations - specifically the likes of Jeff Minter (TxK) and Eugene Jarvis (Robotron: 2084).

But the visual style is a little more in the wheelhouse of Fukio Mitsuji (best known for Bubble Bobble). Everything is cleanly designed and the characters look ever-so sweet.

The game's on track for a release in about two months time, and will carry the price tag of £3.99. From what I've played so far, this could easily be a surprise hit for the Vita: there's loads of content, it plays wonderfully, and it's refreshingly different.

Check back with us at the end of May for the full review, to see if that is indeed the case.
Next Up :
Harry Potter Magic Awakened release date and the rest you need to know