Attack on Titan Tactics is a tower defence strategy game based on the popular anime series, you can pre-register now

Defend humanity from the Titans

Attack on Titan Tactics will be a tower defence game based on the first season of the popular anime Attack on Titan. It will be available on both iOS and Android but it is currently only available to pre-register on Google Play.

If you're unfamiliar with the series the premise is humanity has to live within huge walled cities to protect themselves from giant, naked humanoid creatures known as Titans that see people as a tasty snack. I find them deeply unsettling. From that basic concept, it sounds like the ideal setting for a tower defence game doesn't it?

Based on the trailer there will be traps you can deploy to slow down the Titans as well as Scouts to fight them, many of which you'll recognise from the anime like Levi and main character Eren Jaeger. There will be around 40 available on launch and each of them will have their own abilities so you can expect using them at opportune moments to be where the strategy comes in. 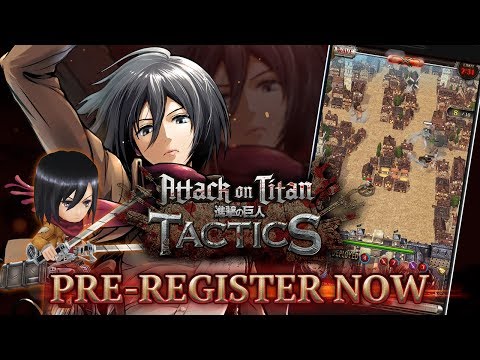 Tactics will feature all of the original voice actors from the show so you can expect it to be an authentic-sounding experience which is great to see. It will also feature new stories that haven't been seen in the anime before, so there's even new lore on offer for ardent AoT fans.

As is often the case with pre-registering campaigns, there's a bonus on offer if 70,000 people sign up before launch. Player's will find themselves with 300 Crystals which will be enough for 10 attempts to recruit new troops to your defence efforts.

Attack on Titans Tactics will be available sometime in the Fall on both Android and iOS. You can pre-register now over on Google Play if you already know you're up for defending humanity from giant, creepy humanoid things.

Check out our news section to discover the latest, and greatest, games.
Next Up :
Happy Game will soon give mobile gamers psychedelic nightmares on February 2nd

Attack on Titan Tactics is available for iOS and Android now in the US, Canada and Australia