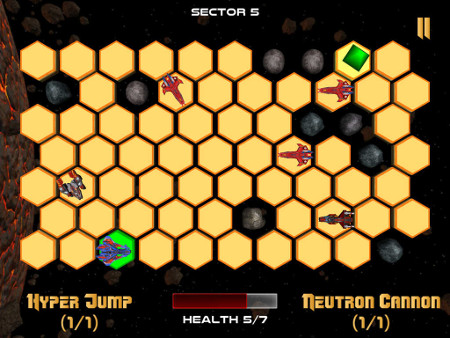 Assault Vector is an intriguing, lo-fi science fiction escapade that mashes together elements of a puzzler, a roguelike, and a strategy game. And it works pretty well.

You control a ship bobbing around on a hexagonal grid. Every grid space you move counts as a single turn. After your turn, the bad guys have a turn.

Different enemy ships have different arcs of fire, and if you come to rest inside one of them you'll take a hit. Land adjacent to an enemy, and out of their line of fire, and you'll get to shoot at them instead.

It all makes for a clever, reasonably fast-paced experience. You can tap on an enemy ship to see it's range, and use a hyper jump or a special laser instead of your usual turn.

At the end of a level you can buff up your spaceship a little, either adding more health, or extending the range of your super jump or your big cannon.