Ultimate Rivals: The Court tips to let you explode on the hardwood

You'll love our Ultimate Rivals tips because we will teach you just three things to do and, although they might seem simple at first, they will help improve your gameplay!

Ultimate Rivals: The Court is a part of the quickly growing Ultimate Rivals series, which features old-school, arcade-like gameplay from games you know and love from the past. Games like NBA Jam or NHL Hitz come to mind here when thinking of comparisons.

The game is pretty unique in that you use real-world athletes from different sports. So that means you can unlock athletes from the National Football League, Major League Baseball, National Hockey League, and some athletes from FIFA football (soccer in the United States).

Big sports stars such as Juju Smith Schuster from the NFL, Alex Ovechkin from the NHL, and Skylar Diggins-Smith from the WNBA are all in the game among others. You play in three on three basketball games and the action is fast-paced, intense and there are also Ultimate abilities that you can use once available, kind of like the iconic Gamebreaker system from the NBA Street games. Here are a few tips to get you balling on the hardwood.

Be Cautious When Driving The Paint 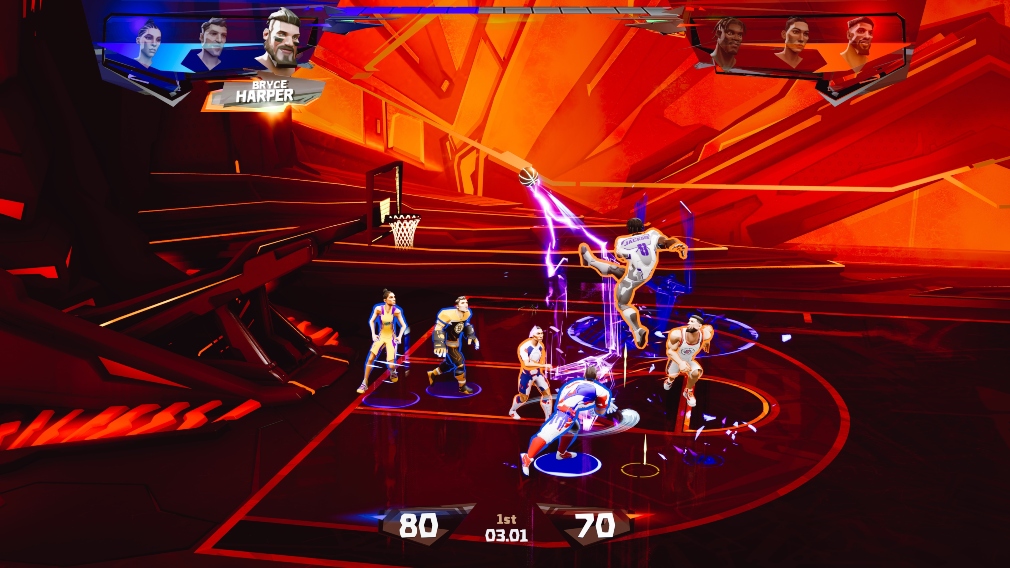 With Ultimate Rivals: The Court being as fast-paced a game as it is, you can expect a bit of chaos. On offense, if you can, definitely feel free to take it the hoop for a layup or a ferocious dunk. However, it's a good idea to be mindful as the defense can also be tough.

You'll be able to get yours, but players on the other team can block fairly easily. This is due to the fact that you can jump pretty high when you block. Also, players with larger statures may block a bit easier than others. If you need to; kick the ball out to a teammate.

Of course, outside shots can be blocked too, but it won't be as crowded as the paint can be. With that said, this doesn't mean that you should take it to the rack. The dunks in the game look awesome and can give you a nice boost on the court. Just know that the defense might be a bit stingy.

Don't Hesitate to Go For The Swipe

Stealing the ball is what I mean by "swiping" as you can imagine and you can attempt to do this with ease in Ultimate Rivals: The Court. And I say "attempt" to do it easily because it's really easy to actually perform the movement during games.

A simple tap allows you to go for the swipe, and the best part of all is that there are no fouls. So go for those steals at will. Just know that you need to be right in front of the ball to knock it away. In some freestyle-type basketball games, you could steal from behind and things like that. Not here you can't.

Good defense can lead to easy fastbreak buckets so try and stay on lock. Get the steal and if you can't take it to the other side yourself, then there may be a teammate already up ahead that you can dish to for an easy layup, dunk, or possible three-point shot.

Your Ultimate ability in Ultimate Rivals: The Court is as powerful as it gets. In order to fill it up, you need to simply make plays on offense or defense. Score some consecutive points and such for example and you'll have the meter filled in no time.

Once it's ready, your character and the ball will turn into a scorching inferno, showing a bit of inspiration from NBA Jam's iconic "On Fire" mode. When making shots in this Ultimate mode, you'll get a bonus in form of points you score and you can score in numerous ways.

You can go for a fiery three-point shot, layup, or go for an epic, game-changing dunk. The meter doesn't fill up super fast, so definitely make sure to take advantage of the situation. Use it to lift your team to victory and then some out there. We hope you liked our Ultimate Rivals tips! Make sure to check some of our similar work like CoD Mobile tips and codes, Epic Seven tips and many others!

Valve's Steam Deck: A real threat to mobile or just a passing fad?