As a child, I have fond memories of sitting down and playing the Game of Life with my cousins, hoping that my life, however random, could be balanced enough to be the best life of them all. Well, The Game of Life 2 has come out on mobile, and despite there not being many people in England who have played the Game of Life, I am pretty excited.

Gameplay of The Game of Life 2

The Game of Life 2 starts you off by having you create your character, pick your car, and decide your gender. I quite liked the character selection - instead of just pink and blue characters, there is also a purple character that has qualities of both pink and blue. When it comes to getting married in the game, you have this same selection, which is something I quite liked. There are a bunch of different cars and skins for your character and you can unlock more through purchasing season passes or completing in-game achievements, but more on that later.
Subscribe to Pocket Gamer on

Once you have your character sorted, you can then choose how many players you want to play with - either real life in pass and play or online multiplayer or as bots. You’ll need four players, it’s just up to you how many are real humans and how many aren’t. Once the game starts, a person is randomly picked to go first, and it’s time to begin.

If you are not familiar with the board game version of The Game of Life 2, players move around a board using a spinner. There are lots of different milestones in your life, which can break you down different paths, depending on what you pick. You need to start off the game with one of these big decisions - will you go to college or just get a job. Getting a job gets you more cash right now, but going to college will give you some education and a possibly higher paying job. In the future, pay increases will also be more money than those who do not pick a job. This decision is at a crossroad, showing you some of the tiles you can end up with depending on what path you go down.

There are more of these decisions - ones on getting married or staying single for example - and once you make this decision, you can spin again and start going down your path. There are a lot of different stops along the way though - paydays to pass over for more cash, taxes squares that you can land on to decrease your money, fate tiles that allow you to spin in hopes of getting something good and, the most common tile in the game, action tiles. Action tiles give you two decisions - some will cost money to give you different points in various categories, while others can be group challenges or 1v1 challenges where players need to spin the spinner.

These different categories that I have mentioned a few times help you round out your life. You get points in education, wealth and love - depending on your decisions. These are represented by a blue book, a piggy bank and a heart, respectively. The people who have the highest score in each of these categories will get more points at the end of the game, but collecting any points in those categories will give you points as well.

Yes, you can retire!

Once you have lived your life and made it across the board, you can pick to retire in a caravan or a home - sell off any homes you have purchased, then will spend the rest of your turns spinning the spinner and hoping for something good.

The Game of Life 2 is a fun version of the board game, however, it does feel like there is far more waiting. Though the little cutscenes are cute and watching bots pick their turn is understandable, it’s a bit boring without people to talk to, creating their story on why they have changed jobs or got a new cat. You can speed up time, but then you’ll not be able to really watch what is going on, which can hurt your gameplay. 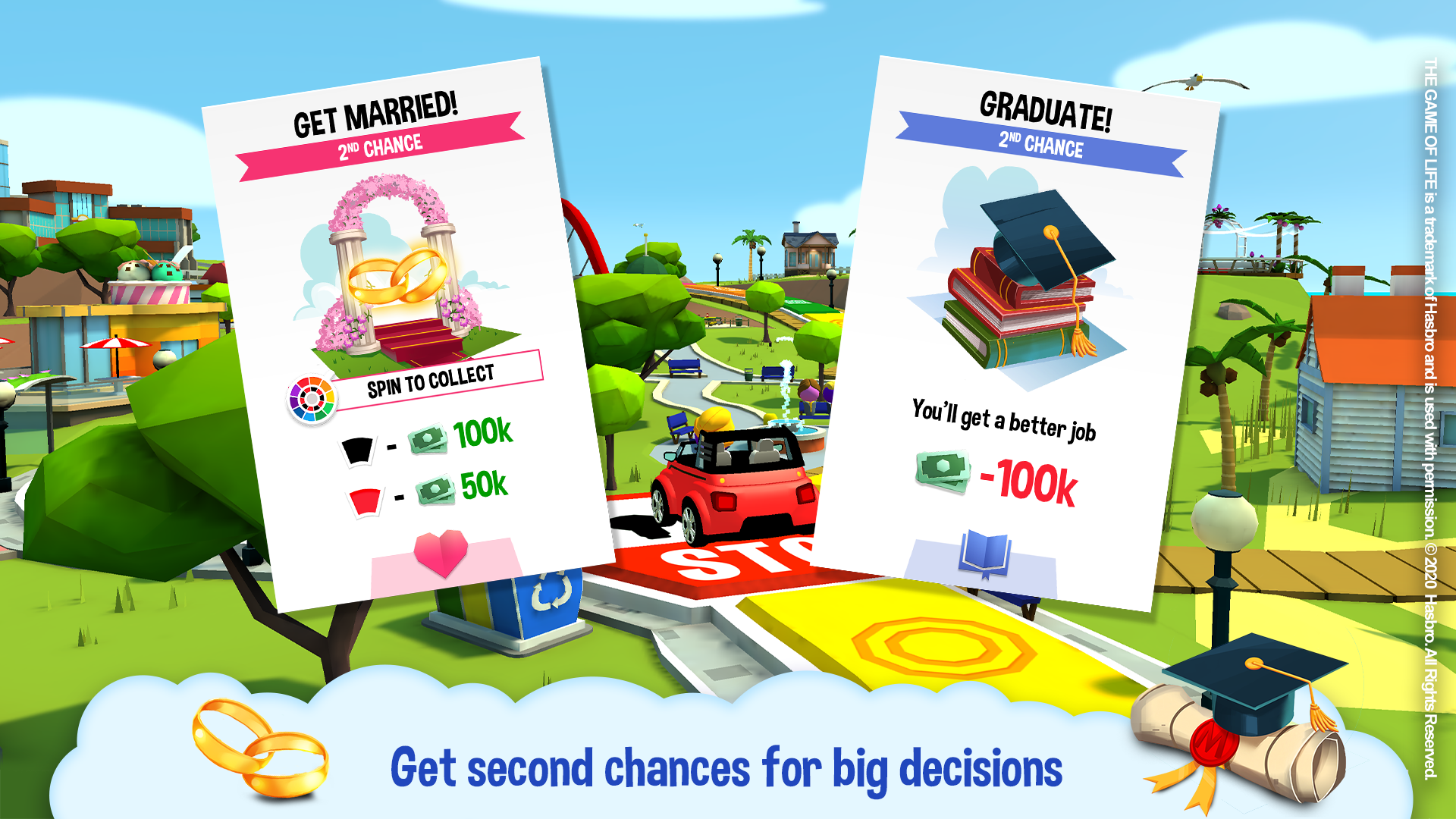 The Game of Life 2 has season passes which bring new boards - we took a look at the fairytale board - and matching icons, character skins and cars. Though the new board is really lovely, the theming just isn’t there to make a season pass worth it. The job cards and houses you can buy are switched to match the surrounding area, but other events and items aren’t. This means you might be purchasing a large TV despite being a fairy. That makes literally no sense to me and really does pull away from the value of the season pass.

Overall, I did enjoy the pass and play version of The Game of Life 2, but I don’t think I’d ever get the season passes or invest in the game itself. Much like the board game, having the app around in case I want to play it is fun, but I am sure that it won’t get used unless everyone I am with wants to play with me.

The Game of Life 2

The Game of Life 2 is a fun version of the board game, with the addition of different maps, but ultimately it's still a lot of waiting around if you don't have friends.
By Jupiter Hadley
| Apr 21 |
Android + iOS
Find out more about The Game of Life 2