In order to win the game, players must find the best possible synergies and combinations for their Clash Royale decks. There are about a hundred cards in total currently, out of which each player can only select eight of them to create their decks. Every deck has its own playstyle. Some require a more aggressive approach, while others excel in a more passive and counter-pushing the lanes gameplay.

Clash Royale by Supercell is a fast-paced high-pressure game where players face each other in a real-time strategy battle. You can download it from App Store and Google Play. There are many different modes, tournaments, ladders and even a clan feature. Three towers on each side of the map and two lanes with minions fighting each other are all there is to Clash Royale. As for the gameplay, the main goal is very simple. All you have to do is take down your opponent's towers and win the game. Seems pretty easy, right?

How many Clash Royale decks are there?

The number of possible different Clash Royale deck combinations is in the hundreds of millions, and for a new player, it can be somewhat overwhelming. In a game like this, the meta is always changing. Decks that used to be in the meta have fallen off and who knows what the new updates will bring. Even for returning players, it can be challenging to catch up with the current state of the game after some time away from it.

Check out all the best Clash Royale decks on the following pages!

Want more? Check out our 11 other Clash Royale tips, guides and walkthroughs! 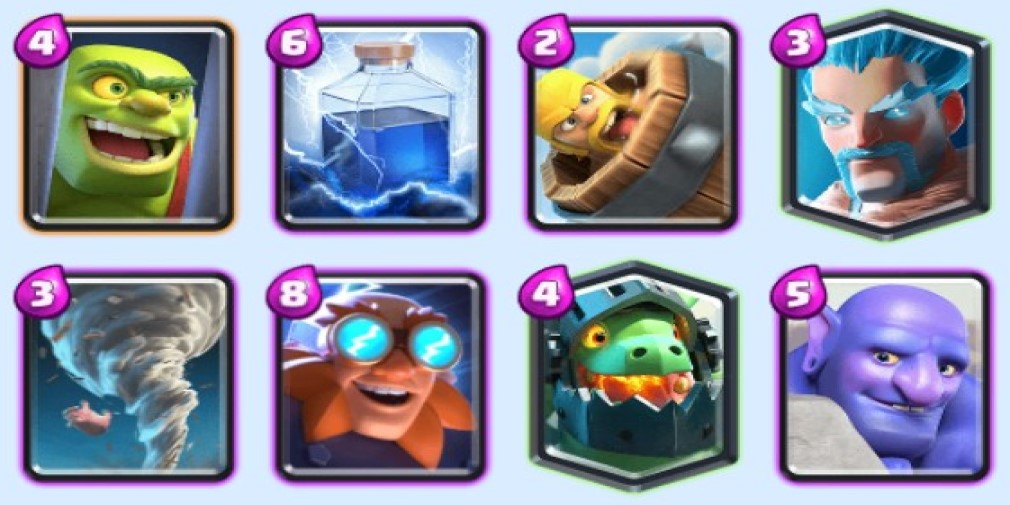 Another heavy deck as it's cost is quite high at 4.4 Elixir but also a very strong deck at the moment.

Your ideal push would be something like, Giant up top, Bowler at the back and Inferno Dragon in the middle to clear any kind of threats. Obviously this isn't something that can happen every single time, but you get the idea.

Bowler plus Tornado does a surprising amount of damage that will catch your opponents off-guard.Your go to defense is the Goblin Cage. It's a building and a unit at the same time and it can help you with a counter push. 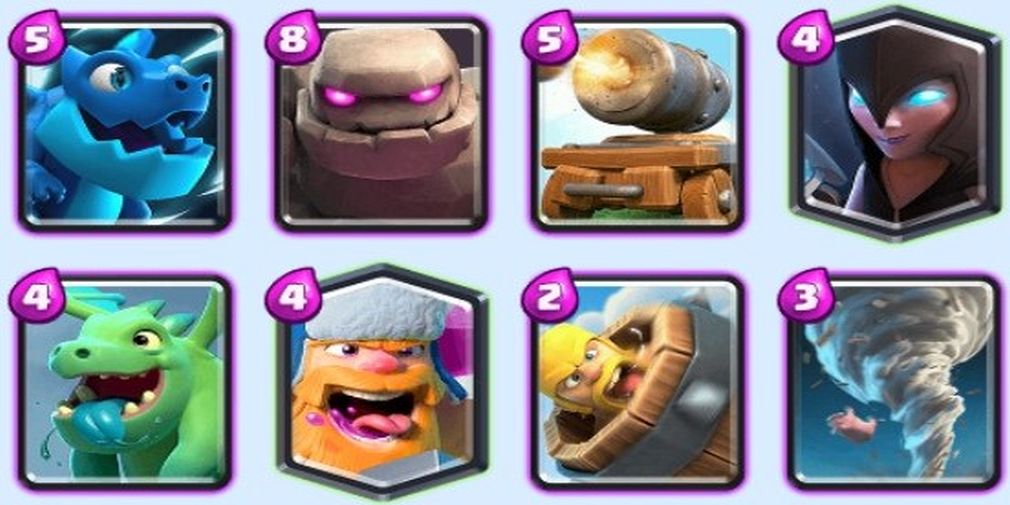 Another variation of a Golem deck, this is definitely one of the strongest Golem decks in the meta and one of the best Clash Royale decks in general. As in every Golem deck, your main win condition is the Golem but in this variation you also have Cannon Cart to support your attacks. You want the Golem to lead the charge of your big pushes so it can absorb the incoming damage.

Cannon Cart is very strong currently and it will provide you with long range powerful attacks That kind of damage can be very punishing if you catch your opponent off guard. 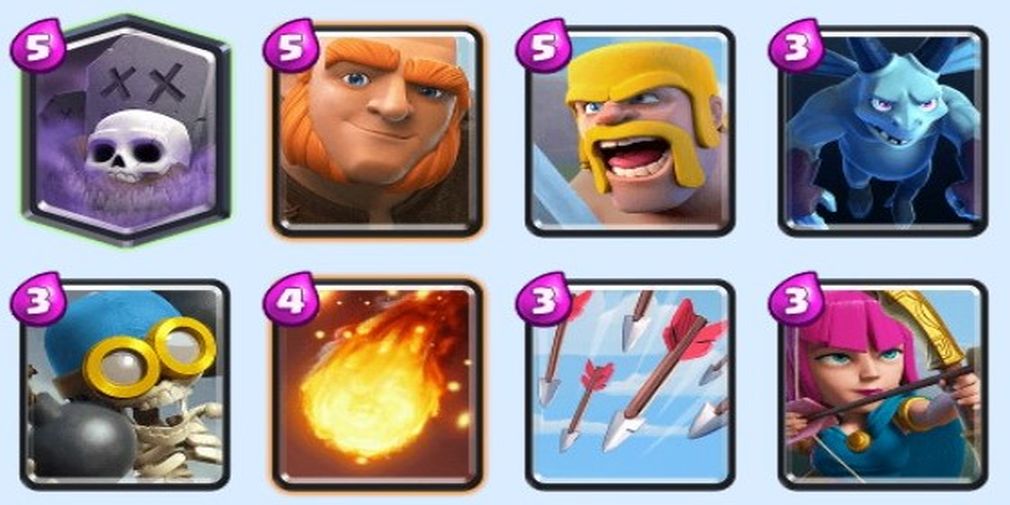 There are many variations of Giant Graveyard decks for sure. What makes this one different you may ask? Well the difference is the defensive potential of this deck compared to other decks of the same type.

Instead of Skeletons you are using Barbarians. Barbarians will demolish everything in their way if your opponent doesn't respond correctly and along with the Bomber (which is a very underrated card) you can pretty much defend against any kind of attacks and even get counter push. Your opponents will have a hard time attempting to push their lanes against that kind of defense. 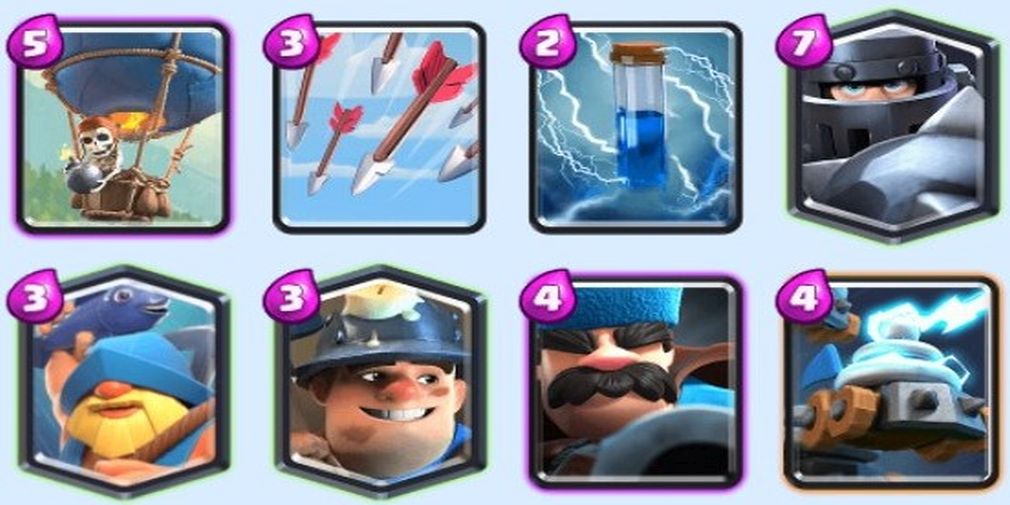 A rather expensive deck that came into the meta recently is the Mega Knight Balloon deck. Defend and counter push with the Balloon is the main idea.

You have some well known defensive combos such as the Hunter and the Fisherman. Fisherman will pull tanks and the Hunter will apply high dps as well as splash damage.

Be careful as this deck is somewhat limited dealing with air attacks. The Zappies and the Hunter are your only defense against those types of attack. 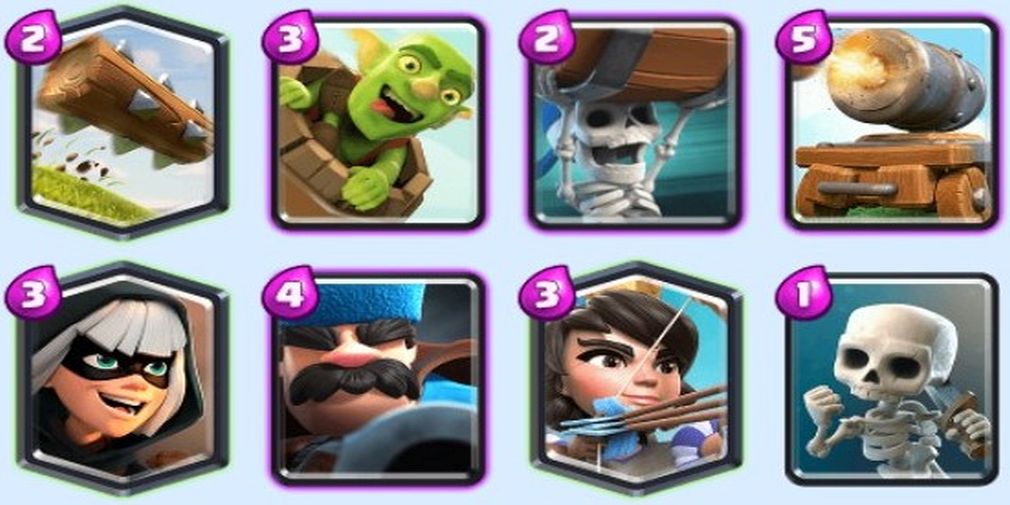 Another variation of bait Clash Royale deck. A very fast circle deck that can counter most of the popular decks in the current meta.

You want to play aggressive and apply constant pressure with your low cost cards. Try to leave no room for your opponent to build up their own pushes. Spam Goblin Barrels and Wall Breakers at the bridge and recycle your low cost cards winning Elixir trades in the process. 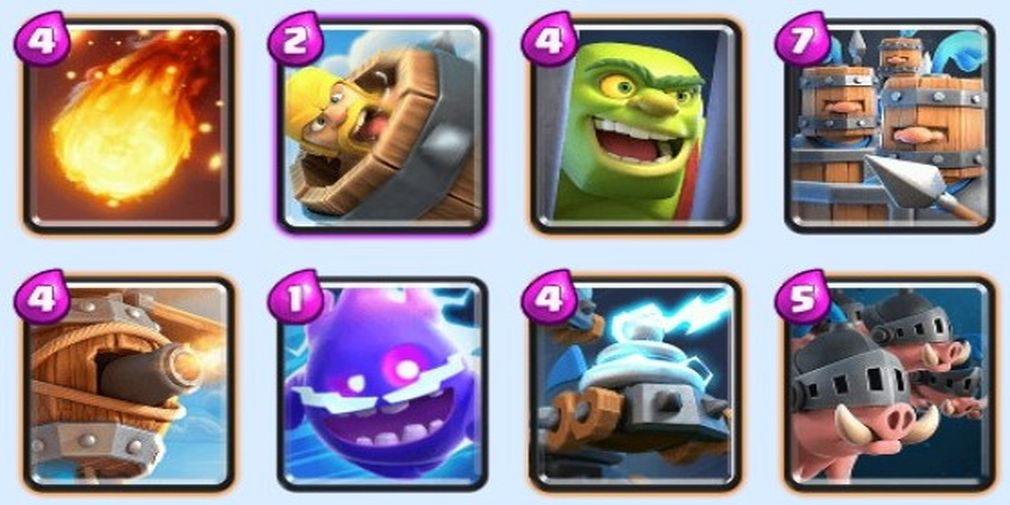 As they say, defensive is the best offense. This philosophy applies to this Clash Royale deck perfectly. First you want to focus on building your defense then go for a push by counter attacking.

Play your hand right and you will overwhelm your opponents with the number of units this deck can provide for you. The main idea is to split your Royal Recruits by summoning them at the back so you can take advantage of their numbers. That way you force your opponent to react on one lane and once they do, you go for an aggressive push on the opposite lane with your Royal Hogs.and the remaining Royal Recruits.

With Goblin Cage you can pull enemy tanks and of course you have a high dps unit in the Brawler once your Goblin Cage dies.

Royal Recruits can defend against anything and because of their numbers, more often than not some of them will survive and join forces with your other units for a counter attack. 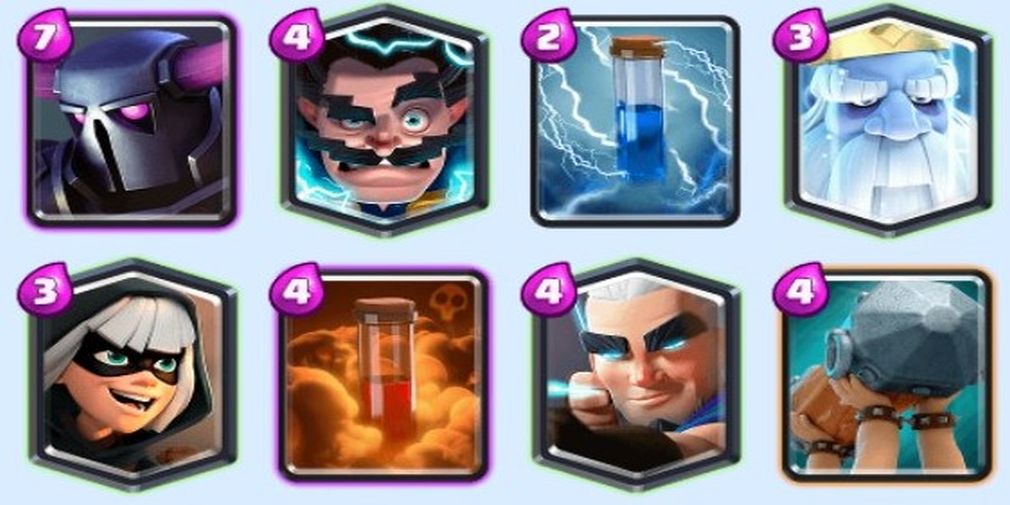 You don't want to play aggressive with this deck as it's not very cheap. You have to be very patient and look for opportunities to counter attack and then push lanes.

It's a more passive play-style but make no mistake, this deck is very strong in the current meta if you play your hand right. Once you see your opponent over committing then it's the right time to start spamming your cards.

A very easy deck to play which is also very effective against most of the Clash Royale decks in the current meta. Even thought it's not a very cheap deck as it has a 4.1 Elixir cost, you want to play aggressive.

Very good defensive options that can stop any kind of attack. Arrow plus Poison is a super effective combo to use.

Try to avoid splash damage by spreading your units or by baiting your opponent's spells whenever you can. 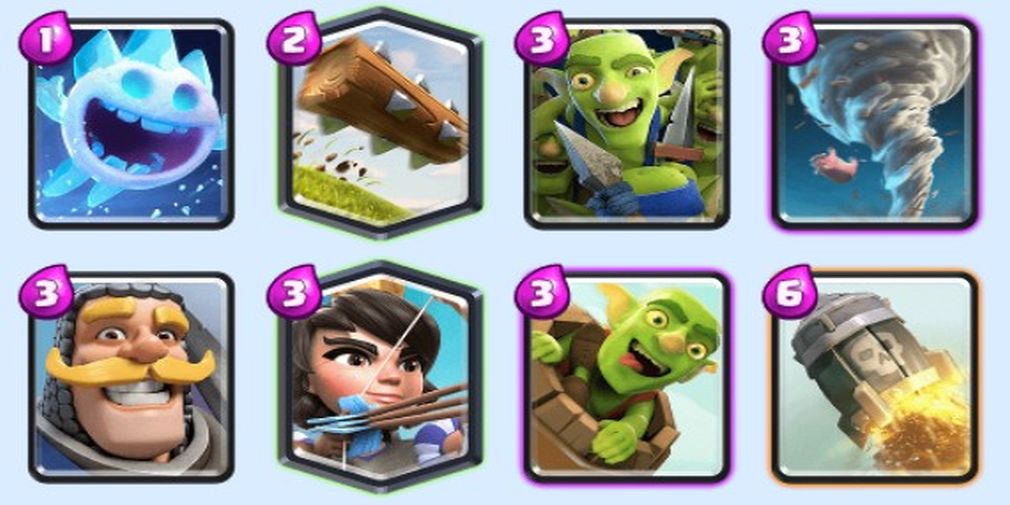 To put it simply, Tornado is just too powerful right now. Even the level of it doesn't matter THAT much (obviously you want it maxed if possible). Running Tornado in a log bait deck can surprise your opponents. That is at least until more people realize the power of this deck and start using it.

When you have Rocket Cycle you can Tornado them together and rocket all three of them if you want to. Just launch the Rocket first then activate Tornado. 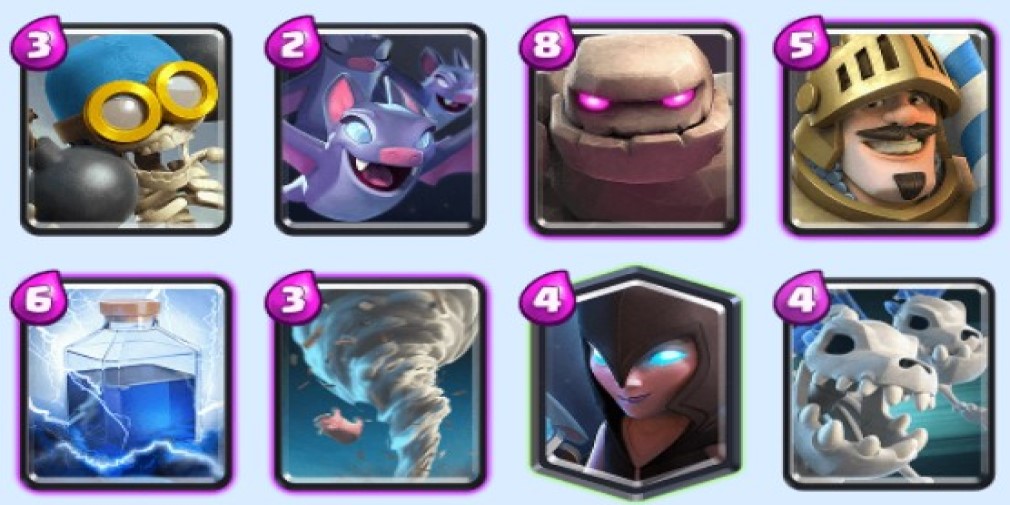 This is a pretty straight forward offensive Clash Royale deck. Enemy players won't be able to deal with your Bomber, Skeleton Dragons and the Night Witch all at the same time. You can bait their Firebal easily with these units.

Rely on your Bomber or Skeleton Dragons to eliminate every squishy bait card that they throw at you. Ultimately what you want to do, is to protect your Prince and along with your Golem push the lane to take down towers..

When you are running this deck you always want to punish opponents who are over committing and you want to play aggressively when you have a lead.

You can use the Clash Royale deck builder to test out our builds.

Wild Rift Patch 2.2 - Everything you need to know about the latest update