Created during the COVID-19 pandemic lockdown, Five Dates is about Vinny, a man living in London during the lockdown who joins a dating app. With five potential matches, you control Vinny’s responses on virtual dates he goes on with each match via video calls. The game stars actors Mandip Gill from Doctor Who and Georgia Hirst from Vikings among others. 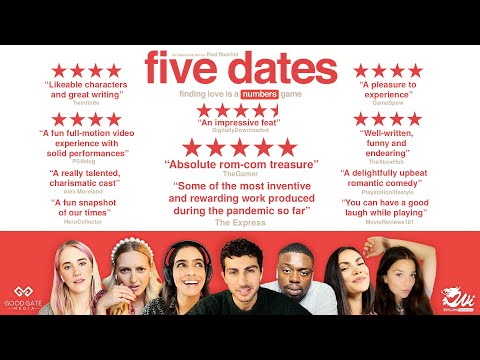 Your choices over the course of the game define Vinny’s interactions with each date, ultimately determining if they’d be interested in seeing him again. The game uses a branching chain of conversation topics to lead to this, where the tone of the evening can go from serious, deep questions to awkward comedic moments.

As the game is about video call dating, it seems perfect that it came around in a time when many of us are doing just that: “Five Dates is an exploration of the unpredictable modern dating experience, which follows an average single man as he navigates the world of digital dating. Through his journey, the decisions the viewer makes for him will challenge their own conceptions of attraction and compatibility,” says the official store page for the game.

Five Dates comes from Wales Interactive, the publisher behind other popular FMV games such as The Complex, The Shapeshifting Detective and The Bunker. It’ll be available from the iOS App Store on Valentine’s Day, which is this Sunday, where it is a free to play title with in-app purchases.

A version for Android is also planned, but we don’t have details on when that’s coming yet.

If you're playing a lot of free games on your mobile phone at the moment, be sure to read our list of the best ones.

All you need to know about TFT Fates Championship