Get your paws on this fun, free game

What do you get when you combine a cartoon raccoon’s insatiable appetite with the frenetic fun of pinball? Taffy: Feed The Kitty, of course.

This new pinball-style puzzler is the first mobile game based on the popular cartoon series ‘Taffy’, aired internationally on Boomerang. If you haven’t seen the programme before, it’s a twist on the age-old rivalry between cats and dogs. Taffy is a raccoon who develops a taste for the finer things in life – namely blue caviar – but the scraps down at the dump don’t quite compete. Seeing an opportunity to escape the scavenger lifestyle, Taffy dupes ultra-rich Mrs Muchmore into believing he is an adorable cat, and adopting him. Mrs Muchmore’s Doberman Bentley isn’t taken in by the ruse, however, and tries tirelessly to expose Taffy for the bin-diving fraud he is. Slapstick fun of the Tom & Jerry variety ensues.

The game uses Taffy’s rumbling tummy as a basis for its simple pinball format. Across 100 levels, divided into seven worlds, you’ve got to help Taffy lob balls at all sorts of appetising treats positioned on and around various obstacles.

Unlike traditional pinball, there are no flippers to help you in Taffy: Feed The Kitty. However, you do have the advantage of being able to shoot multiple balls at once – so it’s all about the aim of your shots, and the type of balls you use. All balls collect food, but some also boast special destructive effects; Spike Balls destroy glass obstacles, Fire Balls destroy wooden obstacles, and Acid Balls destroy metal obstacles. Choose your ball wisely. Also unlike traditional pinball, you can intercept the ball mid-shot by tapping it, pinging it off in a random direction. This becomes especially useful in later levels. 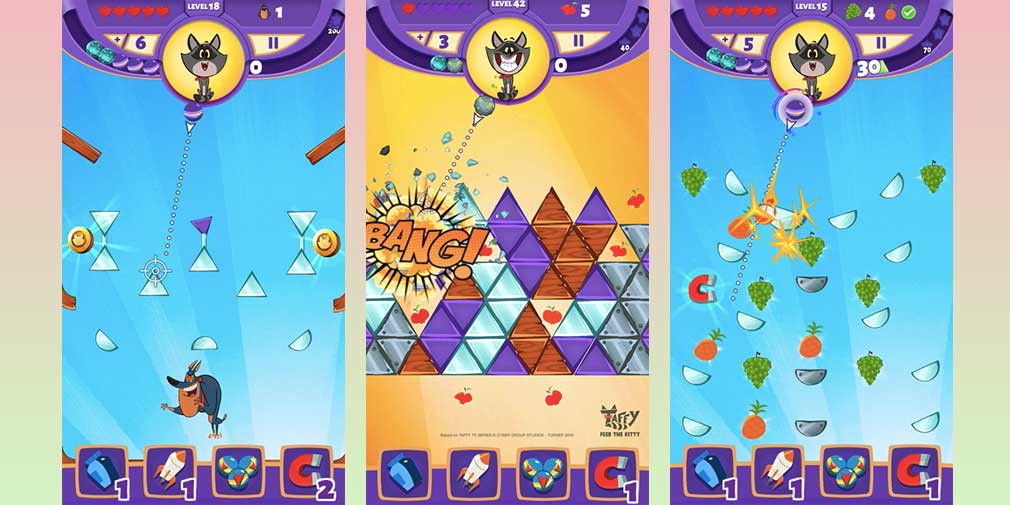 On top of special balls, there are handy boosters to pick up. Magnets draw all the food towards your ball, Triple Ball lets you shoot three balls with one shot, Rockets blast through obstacles and Supersize makes food in the level larger and therefore easier to collect. These boosters can be collected during levels the same way as food, found inside gift boxes and purchasable from the in-app shop.

As everybody knows, real cats have nine lives; Taffy the raccoon has just five. You lose a life each time you’re unable to complete a level. Don’t worry, though – the game’s difficulty curve is gentle, so you should be a dab hand by the time you get to the trickiest levels. 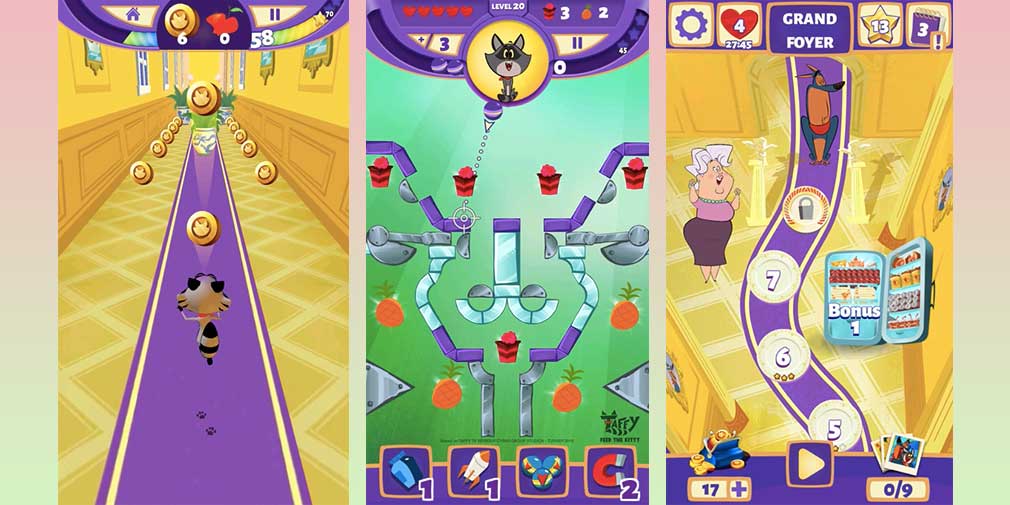 Just as in the cartoon, Bentley is hell-bent on getting between Taffy and his face-stuffing. In the game, he pops up as a boss at the end of each of the seven worlds. Send the mutt packing by hitting him three times with a ball – then collect all the food for bonus points.

Speaking of bonuses: each world features a bonus runner style mini-game, which can be unlocked using the stars awarded to you for completing normal levels. It follows the standard runner format of sliding Taffy from left to right to collect items and avoid obstacles in your path. These mini-games are filled with extra food and coins to collect, so think of them as a relaxing reward for all of your earlier pinball wizardry.

A few more gameplay tips to keep in mind: special balls aren’t the only ones that can destroy obstacles; bounce a standard ball multiple times against an obstacle to break it. Secondly, if your ball gets stuck, you can either wait a while for it to self-destruct, or tap it until it dislodges. Finally, there’s one special ball we didn’t mention: the Lightning Ball. You’ll want to keep an eye out for it…

Help Taffy fill his tummy in Taffy: Feed The Kitty, free on iOS and Android now.