Want to learn the basics? We gacha

The game is set in the universe created by Mariko Kurisawa in her light-novel series. A century on from a devastating war, mutant creatures are roaming the land, and anime girls are the only way to stop them (obviously). These girls — called Oves — are formidable in combat. One of them, however, has become corrupted somehow…

Here’s what else you need to know to get off to a flying start.

Oves are multifarious anime girls dedicated to hunting creatures. There are more than 100 to collect through raffles, farming and fusions. Each has both an elemental type (Fire, Water, Wind, Dark and Light) and a team type (Defence, Attack, Magic and Healer). You will typically take up to five Oves into combat, so getting the right balance of elements and roles can improve your chances of victory. Use Attack types against low-defence enemies, Magic types against low-resistance enemies, Healer types for helpful buffs and Defence types as a strong all-rounder.

Outside of battle, use the Room function to house your Oves in a special shelter — furnished to your tastes with various items from the in-game shop. On top of being a cute home for your characters, it also increases their experience points and affinity over time.

You can adorn your anime girls from top-to-toe with various equipment, enhancing their faculties. Perhaps most important is each Ove’s Ancient Weapon. These weapons can have various effects beyond basic damage. For example, when an Ove with ‘Aleph the Retainer of Raging Fire’ equipped loses sufficient HP, the weapon’s special Silence ability is triggered, affecting all Oves in battle. These weapons are one of the main ways you can improve your heroes’ battle prowess. You can craft new weapons using equipment parts gleaned from clearing stages. 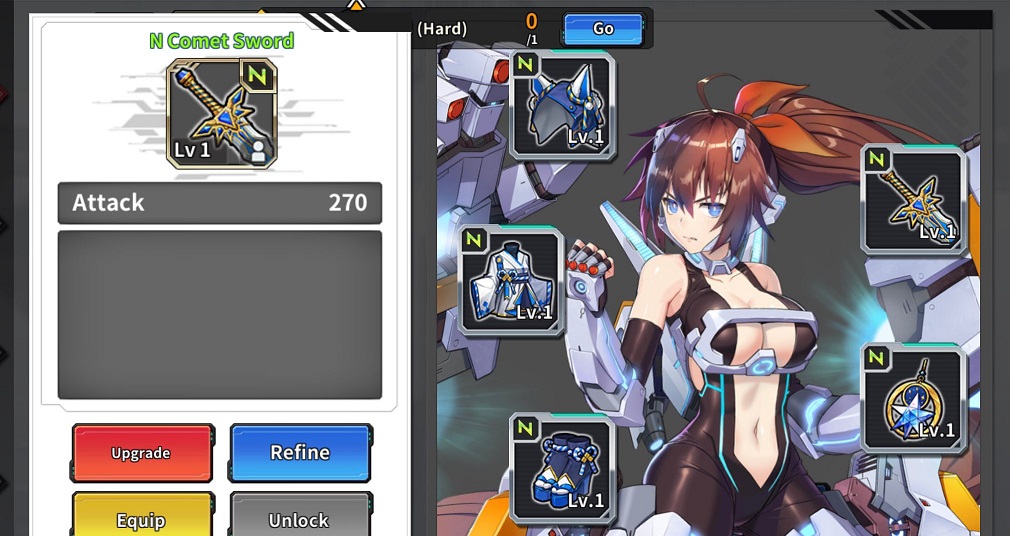 There are also helpful items to use and collect. Alter weapon effects using Refining Stones and Locking Cubes, which you can gather from dismantling unused equipment. Use Boxes, Tickets and Buff items for time-limited buffs and other rewards.

Goddess Kiss: O.V.E has various gameplay modes to try. Adventure Mode is the main story mode, and comprises over 300 stages and boss battles. Choose between Normal and Hard difficulty; Normal reduces the number of enemy waves in each stage, but also reduces the clear rewards; Hard difficulty challenges you with more waves, but offers higher rewards (especially good for repeat plays).

Other PvE modes include Defence Mode, where you can use different tactics to defend against rushing enemies; Boss Dungeon, where you can tackle super-sized enemies for the chance to gain new weapons; and Daily Dungeon, great for gathering enhancement materials.

There are also PvP modes, for when you want to test your Oves against competing players online. New Star Battle allows you to take five heroes with an original star rating of three or below into competition. All Star Battle allows you to take five Oves of any original star rating into competition. In both cases, you’ll be matched with opponents based on rank, and the more consecutive wins you achieve, the better your rank and the greater your rewards. Also in both cases, you have four weeks to rank as highly as you can before things reset and a new tournament season begins.

Now you’re all set to start collecting Oves and battling creatures. You can download Goddess Kiss: O.V.E for free on iOS or Android.