With Project xCloud's Android launch set for next month, I've been spending some time with the game streaming service's beta to get an understanding of how it functions on mobile and what peripherals work best.

Many of the games available on the service – including the Gears and Halo series – weren't exactly designed with touchscreen controls in mind, and most don't yet give you the option to play that way.

One excellent alternative is the Razer Kishi, a Joy-Con-style peripheral with a one-size-fits-all design. It's basically two small controllers connected via a sturdy, extendable strap. The gamepad itself is easily portable and can be stretched out to fit some of the largest phones on the market. 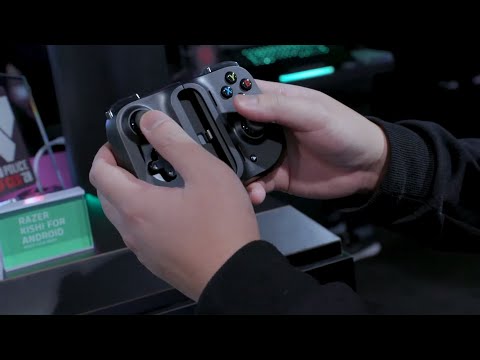 It's also not a Bluetooth controller; instead opting for a USB-C connection that almost entirely eliminates latency issues. It feels good in the hands despite its strange shape, and when it's attached to your device, it has a real premium feel to it. Surprisingly, it isn't flimsy or awkward on any of my Android handsets.

The Xbox Game Pass Kishi features two thumbsticks, four primary face buttons, and Xbox Nexus, View, and Menu buttons. The thumbsticks stand head and shoulders above most made-for-mobile gamepads – and, if you ask me, even the Switch's thumbsticks. They're reliable, comfortable, and smartly shaped.

The buttons lack the satisfying clicks of the Joy-Con, with the Kishi's buttons feeling more in line with an Xbox One controller's, but that's always been my preference anyway. The point is that they're reliable and lack the cheap feel of similar peripherals.

That said, the back triggers are really quite stiff, which definitely isn't going to be to everyone's liking. Their high resistance can make it awkward to pop off single shots in Halo or gently tap the accelerator in Forza. They're definitely usable for me – and I'm sure many will enjoy the high resistance – but there are situations where they don't feel ideal.

The Kishi runs off your phone's battery, though it does support pass-through charging. I made the mistake of leaving the Kishi on my OnePlus 8 overnight only to wake up to an almost dead phone 7 hours later. It doesn't seem to eat up a great deal of battery life, but it's certainly something to keep in mind.

The only sizeable downside to the Kishi is the limited selection of Android games that it currently supports. There's a companion app where you can view the full range of supported titles, and there are many big names among them, but you really should check the full list in case your favourites aren't there. Once you're in a supported game, the Kishi works instantly and requires zero faffing about.

It should also be said that the differences between the standard Kishi and the Game Pass Kishi are purely cosmetic and largely come down to certain buttons being Xbox-branded. The latter does appear to be priced around $20 higher depending on your region, which is really rather steep.

Ultimately, what we have here is a premium controller with a very premium price, though this is generally reflected in the Kishi's build quality and ease of use. If you're looking to emulate the console experience while on the go, the Joy-Con-style Kishi is mostly ideal – doubly so for anyone planning to use it as their primary xCloud controller.

The Razer Kishi is a premium, easy-to-use controller with only a few slight downsides that could be ironed out in time. For anyone looking to play xCloud on mobile, this is an excellent and highly portable alternative to touchscreen controls
By Cameron Bald
| Aug 25, 2020 |
Android

Want Joy-Con for your Android handset? The Razer Kishi has now launched