I have to confess that when this item landed in my inbox, I expected something more comprehensive. I expected the GameSir F4 Falcon to be a fully-fledged Android and iOS compatible gaming controller that I'd be able to use for both Android shooters and Apple Arcade exclusives. And while it's definitely possible, it's not all there.

By which I mean, the GameSir F4 Falcon only actually had two buttons meant for interacting with your mobile device. I had a hard time getting my head around this honestly, as suddenly it seemed that the GameSir F4 Falcon was only suitable for mobile shooters, and not the many other games on the market. And to a degree, that's true. But after actually using the device, I can't say that's a downside.

The GameSir F4 Falcon, through virtue of its sleek design and simple functionality, does a single thing, and it does that thing better than any other product I've recently tested. It always seems unusually difficult to get a good, reliable gaming controller for mobile devices, and while you probably won't be playing many Apple Arcade games with this - and you certainly won't be using it with an iPad - this is still a shockingly good single-purpose controller.

I know that it sounds too good to be true, and this controller certainly has limitations, but it could also prove to be utterly invaluable to the right kind of mobile shooter fan. 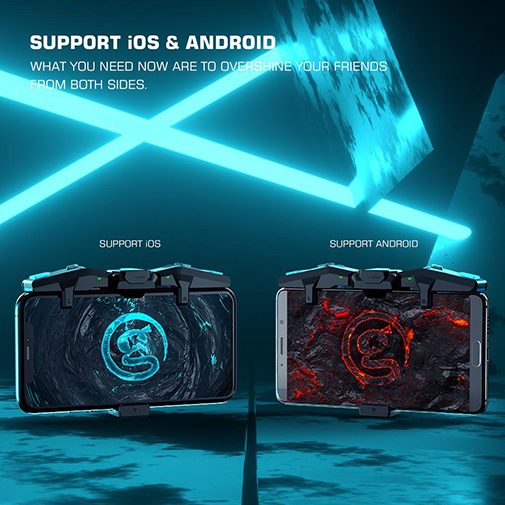 The GameSir F4 Falcon is shaped like any standard phone clip you'd find on a selfie stick, but with a long side to stretch over the top of the device, and two protruding clips that sit on the top of the screen. The device turns on once the clip has been outstretched and held in place for a few seconds, and turns off when the clips retract.

Simply take your case off your phone, and clip it into the device. It's as simple as that. No Bluetooth pairing, no messing with settings, it is now ready to work. With a caveat. What the device actually does is emit a minuscule electrical surge which acts as a contact, and this happens between two tiny pins underneath the two protruding clips. When a button is clicked, your device thinks it had a finger press down on that section of the screen.

That does, of course, mean that all the GameSir F4 Falcon can actually do is mimic a linear touch on a fixed part of the screen, making the use case fairly limited. The best, and recommended, method of use is playing a shooter like PUBG Mobile or Call of Duty Mobile and using the settings to place the ADS and fire on-screen buttons underneath the two clips.

The F4 Falcon does, in a way, come with an instruction manual. A faint QR code on the bottom of the device leads you to the relevant site, where you can find instructions. The main takeaway from the instructions is that the two turbo buttons on the top of the device can be used to set the button to trigger a single tough, three, six, or nine in a burst pattern. This could certainly give you the edge in some shooters, though I didn't find much use of it in my play sessions.

As long as you have a modern smartphone, the F4 Falcon will sit around your mobile device very comfortably. Very large "phablet" style devices and tablets will certainly struggle to fit - you might break the clip - but most modern iPhone and Android users will find the F4 Falcon very comfortable.

And on the subject of comfort, it does initially feel large, but once you begin playing a game you almost forget it is there. Rarely does a device lead itself to feel so immediately comfortable and natural, but this absolutely works, especially if you're already used to playing shooters on both mobile and console.

And, since it's an important point, the device has plenty of soft plastic on the back and sides of the device, so it won't damage your phone. The top rail even has a groove for your volume buttons so they don't get pressed during gameplay. Couple that with a 30-hour battery life and a USB-C charge port, and it's a very simple, straightforward device to use with any shooter that allows for a customisable on-screen button layout. 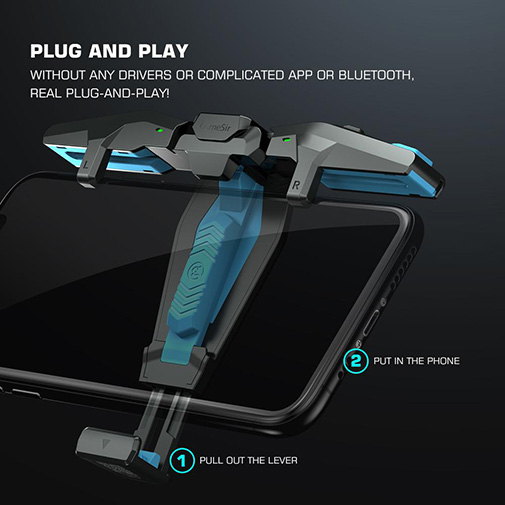 I've touched on it lightly, but the comfort of the device cannot be understated. It is simple and elegant, and so easy to forget about entirely. It didn't even take a single game for me to forget that I was even using it - I was instantly strafing while aiming my shots better than ever, and I ended my first game with a kill/death ratio that would make the professionals proud.

The problem I always had with mobile shooters was the inability to move, aim, and shoot at the same time with only two thumbs, and the GameSir F4 Falcon instantly solves the biggest issue I've ever had. The small addition really does make that much difference.

But of course, as I've mentioned, it does mean that functionality with any other style of game will be limited. It will work with any game where you can remap the on-screen controls, or perhaps even any game which just conveniently uses the top section of the touch screen, but the functionality outside of mobile shooters is going to be very limited.

Although it has limited use cases, it works so well in those use cases that I can't bring myself to complain about it for even a moment. If I were to wrangle a complaint, it would be that after a fairly short period of time the phone clip and foldable top piece felt as if they were grinding in the hinges as they moved, which is a shame, and makes me fear it could break. Having said that, mine is fine so far, and I can't imagine playing mobile shooters without it.

If you take mobile shooters like PUBG Mobile and Call of Duty Mobile seriously, then the GameSir F4 Falcon is a perfect accessory to level up your game on mobile. If you're looking for a controller for any other kind of game, then you're better off looking elsewhere.
By Dave Aubrey
| Jul 24, 2020 |
iOS + Android