The JoyCon are too small. Too uncomfortable. Too awkward for playing fast-paced action games on the Nintendo Switch. While not everyone shares these opinions, they certainly hold weight, especially with the big-hand crowd out there. Even though I usually find the JoyCon to be absolutely fine for most games, there are exceptions.

Astral Chain, the Wolfenstein games, DOOM - these are all titles for which I found the small JoyCon controllers entirely unwieldy, and playing these games portably on Nintendo Switch was more hassle than it was worth. I reserved playing these games until I could sit down with a big screen and a Nintendo Switch Pro Controller, rendering the concept of having these games available to play portably entirely pointless. That is, until, I finally sat down with the Hori Split Pad Pro.

The Hori Split Pad Pro is a pair of replacement JoyCon which are much, much larger than your typical JoyCon, and designed for games that require you to juggle both analogue sticks in addition to the shoulder buttons. The pad was designed with the mild flop Daemon X Machina in mind, and unfortunately for the Split Pad Pro, the ties to that game might've hurt the chances of this controller reaching a wider audience, because this is, by far, the best way to play Nintendo Switch games portably.

The pitch is, imagine if your JoyCon actually felt like two halves of a full-size console controller. It's as simple as that. More surface area, more comfort, a larger range of motion on the analogue sticks - and heck, why not even throw in a capable D-pad while we're here? Essentially, give players all of the ergonomic satisfaction of a larger controller, but make it so you can still snap them onto the sides of your Nintendo Switch so you can play on the move. The Hori Split Pad Pro basically ticks all of these boxes. 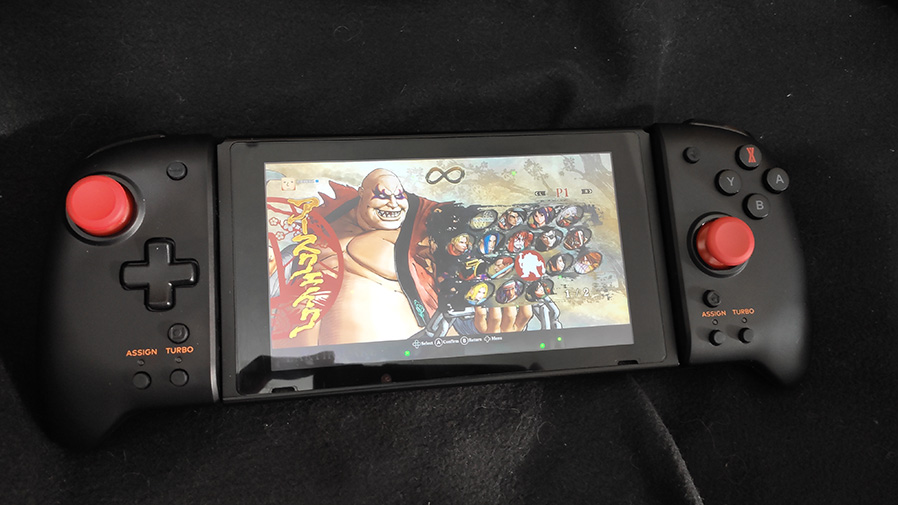 The Split Pad Pro is twice the thickness of a standard JoyCon, and very nearly twice as wide - which will be great news for anyone who has found their hands cramping up while playing on a Switch. The size of the Split Pad Pro makes it far more comfortable, and it even has two buttons on the underside of the controller - a bit like a paddle button, or a modern Z button from the N64 - which can be assigned to any button you want, meaning you never have to take your hands off the sticks if you don't want to.

I tested many games with the Hori Split Pad Pro, including Astral Chain, Samurai Shodown, Super Smash Bros. Ultimate, DOOM, Wolfenstein Youngblood, and of course the game that the Split Pad Pro was made for, Daemon X Machina. I picked these games deliberately, as they are all games that I dislike playing on the default JoyCon controllers. They require fast reflexes, as well as flicking between both sticks, face buttons, and the shoulder buttons regularly, making them a poor fit for the JoyCon. While playing all of these games on the Hori Split Pad Pro, I found it to be far more comfortable than the JoyCon, and comparable to the experience I have playing with the Nintendo Switch Pro Controller.

Even Super Smash Bros. Ultimate, which I ordinarily abhor playing with a Gamecube controller, was perfectly acceptable on the Hori Split Pad Pro. If I'm playing on a big screen, I'll absolutely be using a Nintendo Switch Pro Controller or a Gamecube controller for these games, but when playing portably, the Hori Split Pad Pro will be my new default way to play. It's just more comfortable to play in handheld than ever before - the controllers even feel more tightly and securely attached to the console than regular JoyCon usually do.

The form factor is much larger, which comes with all of the positives and negatives of a larger handheld console. It is far more comfortable, and although the controllers don't entirely sit into your fingers as a larger console's controller does, that seems to be for easier portability, as this does make the system slightly fatter and longer. But the size is great for comfort, and the black and red design works really well with a plain Nintendo Switch. The X button is even the X from Daemon X Machina's logo, and it looks stylish regardless of how you feel about that game. 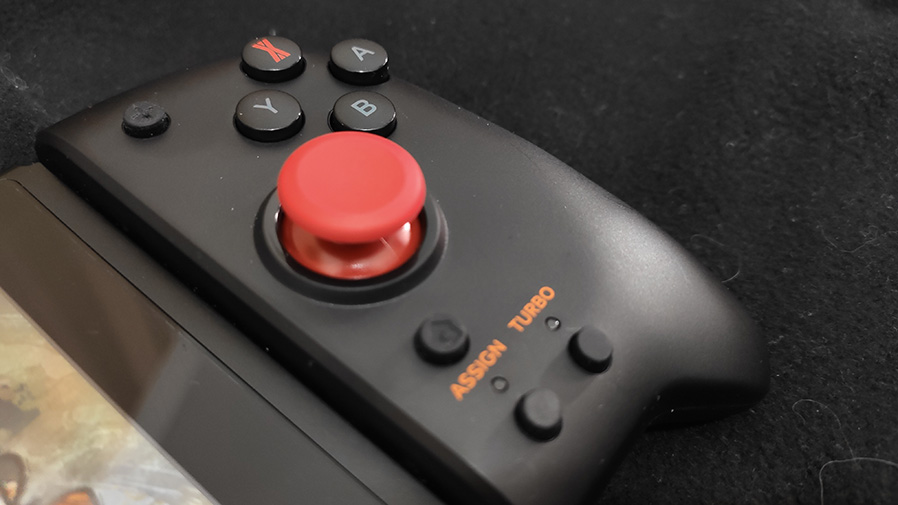 However, the Assign and Turbo buttons have red labelling, which doesn't look pretty, frankly. This slightly ruins the design on the front of the design. And of course, it must be said, these controllers do make the device less portable. It feels much larger than a Switch with normal JoyCon attached, and if you want to throw your Switch into a case, it'll have to be a larger travel case, and you'll need to detach the Split Pad Pro to get everything inside. Having said that, it's possible.

Thank goodness I can report that the buttons and sticks feel very, very good. The face buttons feel like the kind of quality you expect from an official controller, and while I'm not a massive fan of the smooth-matte finish on the top of the analogue sticks, they feel good to play with, so I can't complain. The D-pad though is exceptional. It is at the same time both firm and responsive, and I find this perfect for playing 2D platformers and fighting games - I would even argue that I prefer it to the incredibly reliable D-pad on the Nintendo Switch Pro Controller.

However, the Plus, Minus, Share, Home, Assign and Turbo buttons are all spongy rubber, and they do not feel great. There is nothing wrong with these buttons, but they feel somehow fragile and inaccurate to press - a hard plastic button would've been preferred, but these are still acceptable. The L, R, ZL, and ZR buttons meanwhile feel fine. L and R have a bit more flex and range of motion than I'd like, but the digital ZL and ZR paddles feel perfectly fine.

It can't all be perfect, can it? The Hori Split Pad Pro does have some downsides to it, aside from the obvious slight weight increase. The controller is amazing for playing big-budget, demanding games portably, but not perfect for every instance. For example, I am a big fan of gyro-controls in my shooters, like Splatoon 2. The Split Pad Pro controllers do not have gyroscopes of any kind, and as such, you'll need to rely solely on analogue controls for games like this. Having said that, I feel my fondness for gyro controls in games other than Splatoon were primarily there as I found the small range of motion on the JoyCon analogue sticks to be a hindrance. Basically, I'm fine with dropping gyro controls in games like DOOM and Fortnite if I'm playing with the Split Pad Pro. 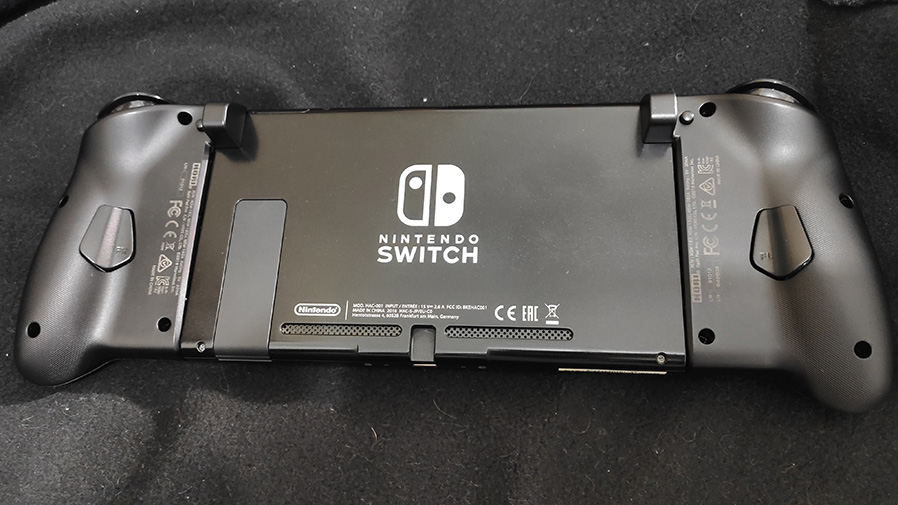 The Split Pad Pro, when detached from the console, feels like it'd be a great controller if you could slot them into a grip, like the JoyCon. Unfortunately, this is not an option, and in fact, the controllers do not work wirelessly at all. These are portable-only controllers, and they also lack Rumble functionality, in addition to the right JoyCon's IR camera. These points are mostly to be expected, but the long story short is that while the Hori Split Pad Pro is a fantastic way to play many Switch games portably, it is not a perfect JoyCon replacement, despite being almost as costly as a pair.

Summary: the best way to play

While I truly wish the Hori Split Pad Pro had rumble and gyro functionality, I am happy to abandon these features for the comfort that comes with the Split Pad Pro. The games that I used to refuse to play without what I considered a "proper" controller I am now more than happy to play for hours portably using the Split Pad Pro. It really doesn't matter what game you're playing, I found them to enhance my experience of playing almost every compatible Nintendo Switch game. It was more comfortable, which helped hold my attention for longer, and the controls feel more accurate.