The latest from Zach Gage and Jack Schlesinger

Acclaimed developers Zach Gage and Jack Schlesinger have now revealed their latest game, and it's a smart play on your grandad's favourite – Sudoku!

As someone who looks at numbers and immediately panics, Sudoku outwardly isn't the game for me. That perhaps looks set to change with Good Sudoku, which makes use of a programmatic Sudoku solver while you're playing. "What on earth is that?", I hear you ask. Well, it's a system that can detect what you currently know based on your answers and notes, then work to nudge you in the right direction.

The puzzle generator itself was written from scratch, with the game currently boasting over 70,000 tricky conundrums to crack. Some of the hardest among them require you to utilise high-level techniques such as "Hidden Quadrouples", "Jellyfish", and "Swordfish". And, yes, that all sounds utterly terrifying, but at the same time, the fact that you'll have a helper with you every step of the way makes it sound so much more approachable. 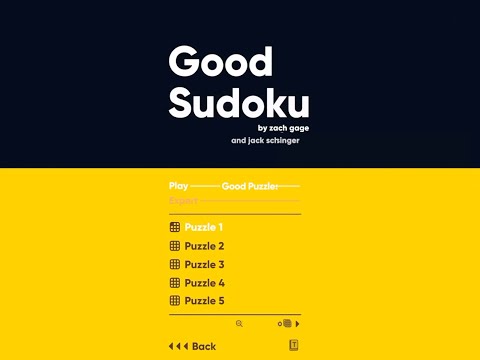 It also offers some handy tools that cut down on any potential busywork, and there are 5 transparent difficulty modes to choose from.

Interestingly, you'll be able to add any other Sudoku puzzles you fancy into the game using its custom puzzle mode. For example, if you're stuck on a paper puzzle, you can easily bring it into Good Sudoku and use the built-in hint system to find a solution. These can also be shared with friends.

Looking back on our coverage of Gage's earlier games, it's clear to see that PG has housed plenty of big fans over the years. From Sage Solitaire and Really Bad Chess to Pocket-Run Pool, they've always scored highly with us thanks to their novel twists on well-known games.

As you can no doubt tell, I don't really know the first thing about Sudoku, but I'm more than willing to let Good Sudoku welcome me in and show me the ropes. It's expected to launch this Thursday, July 23rd, for iOS. You'll find more info on the game's official site.

In need of some quality puzzles games? Here are 25 of the absolute best for iPhone & iPad