Atom RPG review - "Doesn't Fallout too close to the tree"

Atom RPG caused more than a ripple of excitement when its Kickstarter began prior to the game's eventual release in 2018. Since Bethesda began moving the Fallout franchise further away from its CRPG roots fans of the genre were clamouring for more games to fill that void. Because Wasteland 2 evidently wasn't enough on its own, the people needed more.

Now, the game has made its way over to mobile, boasting a 60 plus hour experience that you can carry around in your pocket for only $5. On paper, it certainly seems like a no-brainer then, particularly if you're an ardent follower of the CRPG genre. And those people are pretty much entirely who this game is for. It's certainly not going to change your mind if you've not enjoyed the genre before.

The game starts with a pleasingly extensive character customisation screen. Well, for your stats anyway, your character's looks are entirely chosen by the portrait that you select so there's little personalisation to be found there. But there's a lot of build potential within the character creator with a plethora of skills to choose from such as lock picking, various gun types, speechcraft to talk your way out of trouble and so forth. 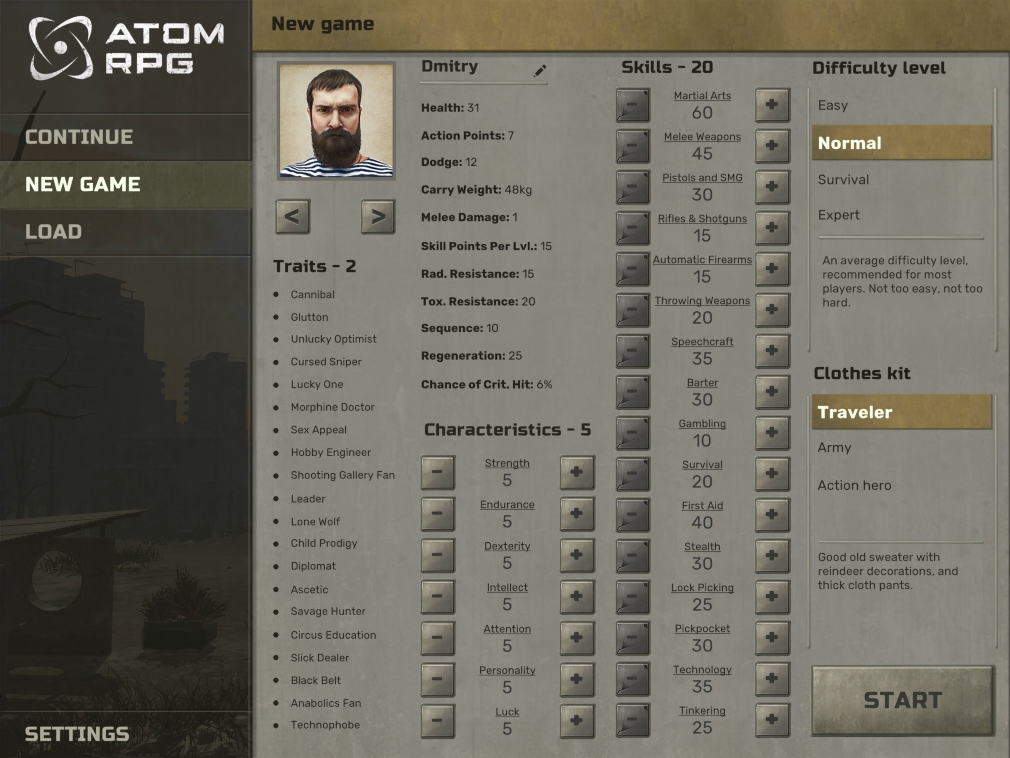 There are also your characteristics, which you'd know in Fallout as S.P.E.C.I.A.L, which of course is slightly different here so as not to completely take everything verbatim from Atom RPG's biggest influence. These feel a little more restrictive than the skills with high Dexterity and Intellect almost feeling like a requirement.

The former governs your combat speed and chance to dodge blows, two things of the utmost importance given how tough combat can prove to be. Intelligence meanwhile dictates the number of skill points you get when levelling up so it feels necessary for reaching your desired build as quickly as possible. Naturally, you can get by without them but it does seem like you'd simply be making the game more difficult for yourself.

Once your character has been created you'll be popped into an entirely optional tutorial where you'll be able to learn the mechanics of the game by exploring a military base. Once you've let, however, the game will quite happily leave you to fend for yourself. Atom RPG is not one for hand-holding. Here's post-apocalyptic Russia, please go and explore by yourself. 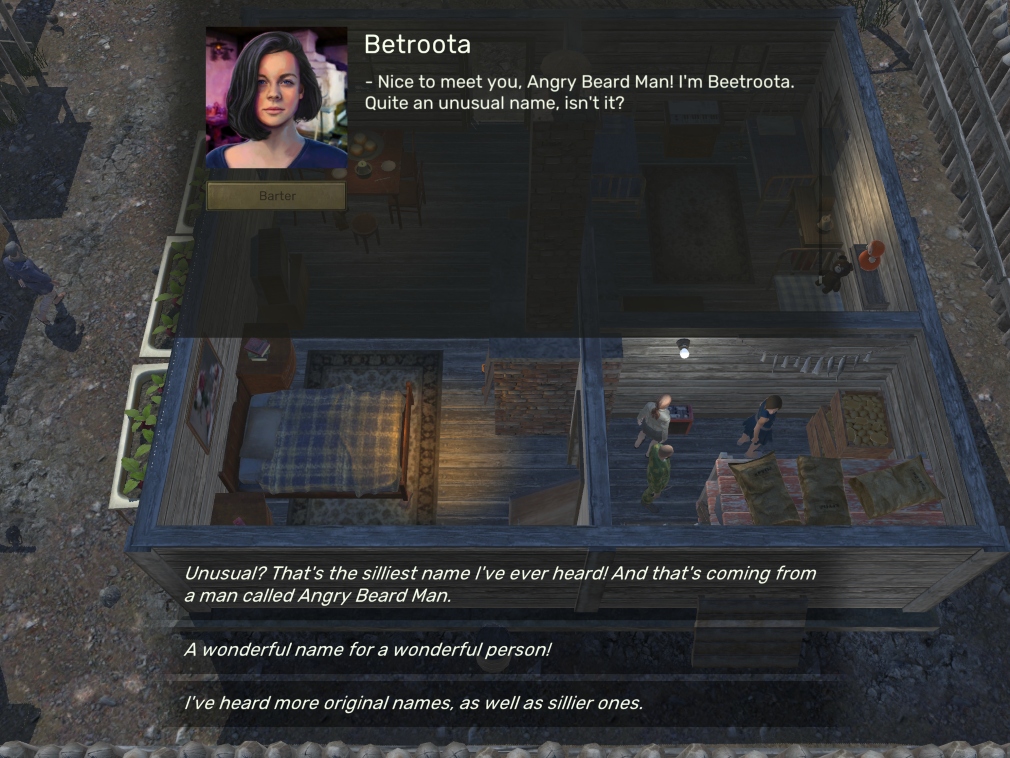 Every main and side quest is only given a brief description when you consult your log and that's it. You can't select one mission as active and then following the helpful indicators you'll often find in most RPGs, you'll need to actively seek out what you're looking for to complete the mission. Sure NPCs may mark the location on your map but you'll still need to open it up and look around for the place yourself. It's a feature that will divide opinion but it made me feel more involved in the quests rather than completing them on autopilot, merely seeking the experience they provide.

This lack of mollycoddling extends to the turn-based combat as well, which is a serviceable but is by no means highlight of the game. It's grid-based and you'll be able to target different parts of your enemies by tapping and holding down on them, though this sub-menu doesn't reliably appear. You can gather companions along the way but fairly limited control over them in combat makes them better suited to stashing extra loot you can no longer carry.

In the early stages of the game, you'll most likely be lacking good weapons for quite some time. My best friend for a good few hours was a knife I'd managed to pry off the dead body of a bandit I'd clumsily beaten to death with a shovel. But I experienced a lot of death in the early stages as I frequently found myself in unfavourable combat situations where even if I did survive, it was barely.

But, this is a post-apocalyptic wasteland, things aren't likely to be easy, nor predictable, which is reflected in Atom RPG through random encounters. The game is made up of several smaller locations where you can chat with NPCs and find new quests but the space between those places is rife with random encounters that could help or hinder your progress.

One time you might run into a group of friendly caravan folk and find they have the weapon of your dreams available to sell or happen to be heading to the same location as you, allowing you to tag along safely for a few rubles. Another time, you might be attacked by a group of five or six bandits barely surviving and needing to use up your precious supplies to restore your health. It definitely serves to portray the difficulty of surviving in the wastes but likewise, it can become tiresome if you just want to quickly turn in a side quest.

Throw in a few bugs here and there and this issue becomes more of a nuisance than it might otherwise have been. To Atom Team's credit, there were some bugs on launch that have now been fixed such as being unable to approach injured people on beds, which rendered one side quest unplayable. But a few still do remain.

For instance, if you need to walk across the entire map you might choose to just double-tap the location and let your character make their own way there instead of using the virtual analogue stick the whole way. However, sometimes your character will be unable to navigate the terrain in front of them and will instead keep teleporting back a few feet before walking forward a couple of steps and repeating the process. This can, of course, be alleviated by just keeping an eye on their progress across the world but this feature exists for convenience, which is somewhat lost if you have to babysit it.

The writing of the game is also a mixed bag. The developers have consciously chosen to mix desperately depressing stories with a bit of humour, which is fine and it's mostly enjoyable, particularly in the side quests. The issue more lies in how your character interacts with people. For whatever reason, they've decided to make your character respond to almost everything with either a joke or as though they don't particularly care. 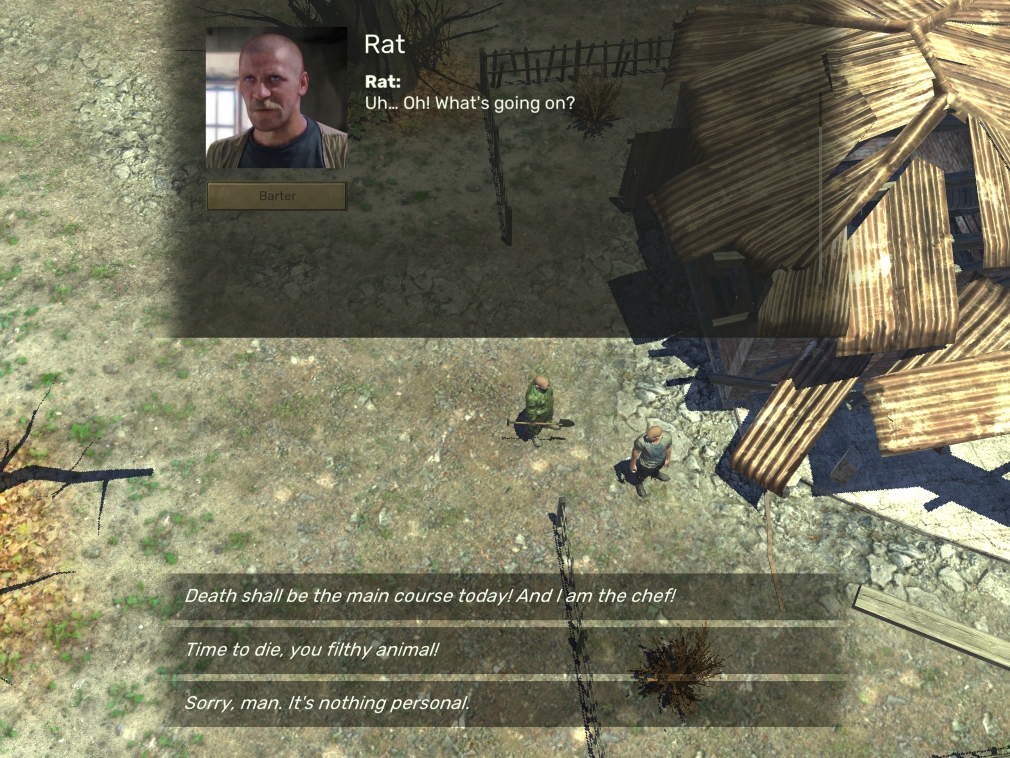 Occasionally, you might hear a heartbreaking tale about how someone lost a loved one and your dialogue options would be something akin to 'shame that, I've got more questions about other stuff though'. It's not overbearingly bad and when appropriate some of the intentionally comedic lines will raise a smile, they just occasionally feel a little off, much like some of the English translation in general.

There's plenty to enjoy in Atom RPG for fans of CRPGs and if you're looking for a post-apocalyptic take on the genre for mobile, there are not too many options kicking around. Just be aware that although the game lovingly tries to recreate the feel of its influences, it neither manages to surpass or equal them.

Fans of CRPGs will discover a lot to love in Atom RPG and might even find some of its lesser flaws - like occasionally wonky writing - to be endearing. For those who usually avoid the genre, however, it certainly isn't going to change their mind.
By Stephen Gregson-Wood
| Jun 12 |
iOS + Android
Find out more about Atom RPG
SEE COMMENTS

What's it like playing Fortnite at 90 FPS on a OnePlus 8?