Following its release on Android

Quadracade is an upcoming arcade game from solo developer Kieran Haden. The twist is that you'll actually be playing four games at the same time. It will be available for iOS devices on 20th February.

It's certainly an interesting concept and Haden believes this will lead to some fast and frantic gameplay that players will keep coming back to so they can chase higher scores. There are 30 different games in total that are inspired by retro arcade titles such as Space Invaders, Punchout and Paperboy, though they'll all have slightly different names of course.

Losing in one of the games means it'll be game over in all of them, so you'll need to have fast reactions to ensure you're keeping up with the action on each of the four mini-screens. New games can be swapped in at any moment and the speed of each game will increase as you progress further.

There will be some ways to help you get a higher score beyond simply playing all four games to the best of your ability, however. There will be power-ups that can slow down the game speed or another that can give your score a boost. Additionally, there is also a switching power that will allow you to swap out one of the four games if you're running low on lives there, allowing you to continue and escape a game over. 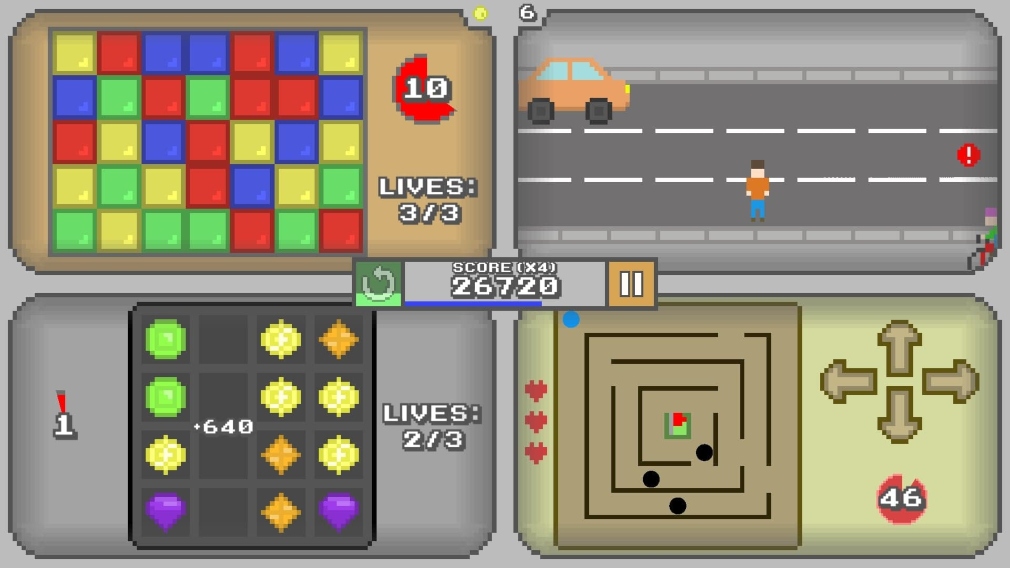 Not all of the game cartridges are unlocked right away though, you'll need to collect in-game coins to get more of them. More are expected to be added in the future as well, which should hopefully keep the game fresh once everyone's developed different tactics for each game.

Quadracade is available to pre-order now over on the App Store ahead of its release on 20th February. It will be a free-to-play game with in-app purchases. It's also already available on Google Play if you're an Android user.

Looking for some new action games? Here are 25 of the best on iOS
SEE COMMENTS