First impressions of one of 2020's most ambitious mobile games

Pascal's Wager has been one of my most anticipated mobile games since I first heard about it last year. It's a 3D soulslike built from the ground up for mobile and set in a Lovecraftian world of mysterious illnesses and demonic beasts. With the final product now mere days from release, I figured I'd put out some brief (though they turned out to be rather extensive) thoughts on what is undoubtedly one of the most ambitious mobile games of 2020.

For those who've never touched a soulslike, they're typically hard-as-nails third-person action games that demand fast reaction times and a penchant for pain. Levels are generally interconnected and built around checkpoints that you use to level up, store loot, and rest. They blend careful exploration of dangerous environments with extensive lore, tough combat, and epic boss fights. Pascal's Wager ticks all of these boxes.

Early on, I was a tad concerned that the lack of class customisation would be a sizable issue. One of my favourite things about the Souls series is its openness to allowing you to beat its challenges in any number of weird and wild ways, and so not even being able to pick a starter class felt incredibly restrictive. 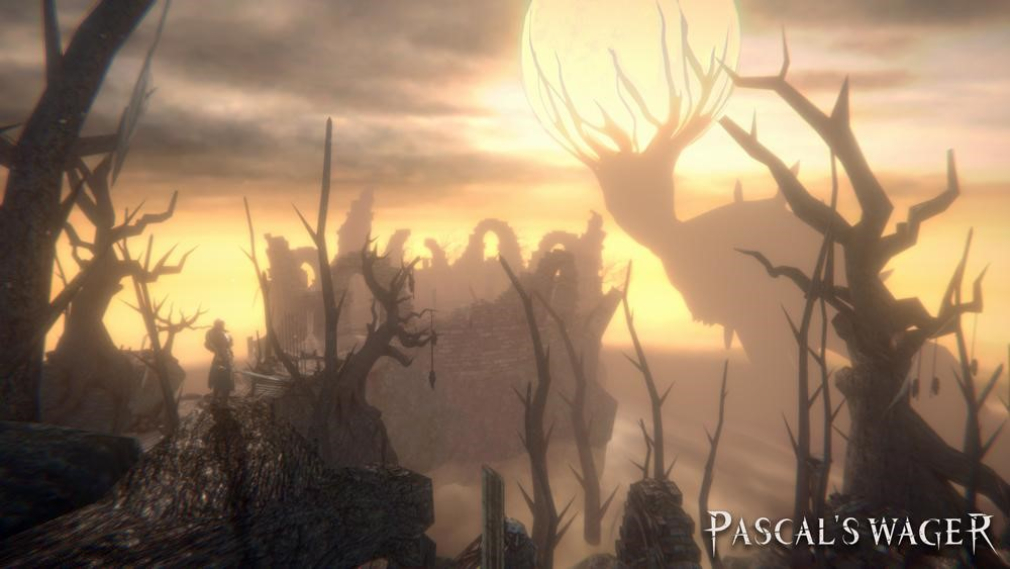 Thankfully, the game makes up for this by shifting the focus to its multiple playable characters. You'll start out as the stoic, Geralt-like Terrence. He's a melee-focused hero who alternates between a stiletto for fast attacks and a heftier sword for massive strikes. He's also a good all-round solider-type class, boasting a decent health pool and damage output. Despite the story following him first and foremost, I reckon Pascal's Wager really comes into its own when you're given the option to switch between the other leads.

Despite not offering the most exciting combat style, Terrence does admittedly work well as an intro to the game's Souls-inspired dodging, rolling, and stamina-watching. Beyond the basics, you've also got a sort of adrenaline meter that, when filled, allows you to unleash powerful attacks. More character-specific skills can be unlocked as you progress, adding an extra layer of depth to the hacking and slashing.

On a basic level, though, the combat can occasionally feel a tad off. Touchscreen controls aren't ideal for a 3D soulslike, though I still found it to be quite stiff when using a controller. Dodging is the biggest offender here, with the game lacking the predicable iframes that make the Souls series' combat work. Still, I did eventually adapt to the unpredictability that rears its head mostly during boss fights.

The difficulty is definitely not quite on the level of the Souls series or Team Ninja's Nioh, which will come as a major relief to many. Standard enemies can usually be stun-locked by regular attacks, and then there's the fact that you basically get multiple goes at each run before having to restart from the last checkpoint. Die as one character and you'll instantly switch over to the next. If they all go down, you'll respawn at the nearest shrine without a handful of your "Finger Bones" – basically this game's version of souls.

Finger Bones can be used to purchase items from vendors found throughout the world, but I often preferred to invest them back into my characters.

Because each character handles a little differently, I can't exactly tell you that Pascal's Wager's combat is more akin to, for example, Bloodborne than Dark Souls in pace. It ends up feeling like its own unique beast, especially in areas outside of combat.

Its world is structured more like Nioh than the interconnected Dark Souls, with each level being its own self-contained location. You can revisit any level you've previously explored to grind enemies or uncover new secrets, which is especially handy considering they usually have easily-missed side objectives. 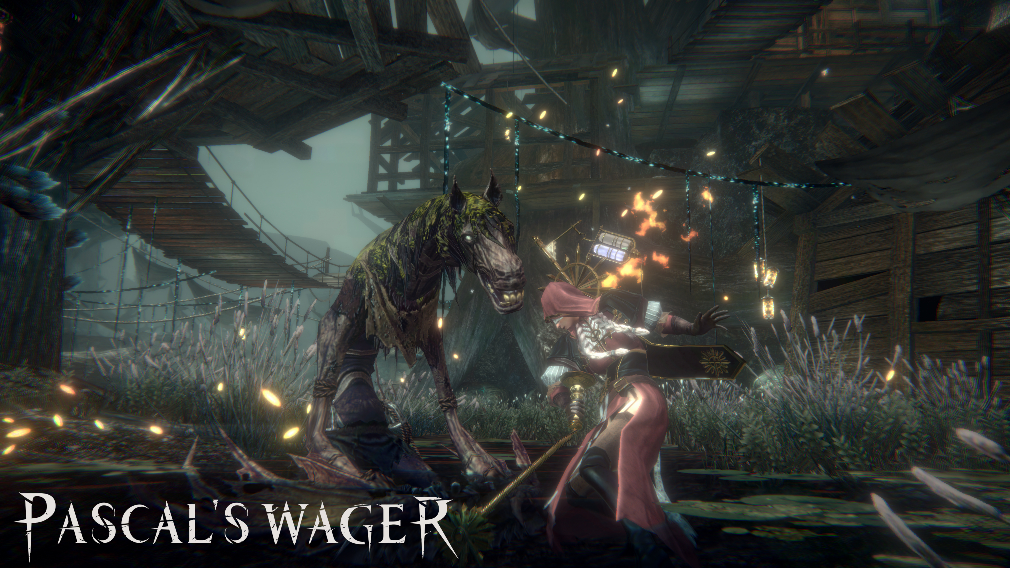 Visually, Pascal's Wager is very grim and verging on samey, which is something I hope it escapes in later areas. It looks good for a mobile game, with detailed environments and character models, but the overall art direction is inarguably derivative and a mite drab.

I did, however, appreciate the enemy designs and the frequency with which fresh abominations are unleashed. The early bosses are a highlight, with the self-flagellating Maddened Ascetic being an absolute heavy-hitting brute.

It's a little more forthcoming with essential info than From Soft's games, always giving you a stated objective, for starters. The narrative is also a lot more direct, told through cutscenes and lengthy dialogue sections as opposed to environmental storytelling, item descriptions, and the vague mumblings of NPCs.

The story itself isn't all that engaging in the early hours. It's another dead/missing wife tale packed with plenty of silly names and tidbits of lore. None of this is helped by the very questionable voice acting and direction. Line delivery is regularly flat or comedically gruff, especially from Terrence, and the attempt to ape From Soft's eccentric NPCs and voices is clear. It's not bad, per se, but I often found myself tempted to skip the inane chatter. 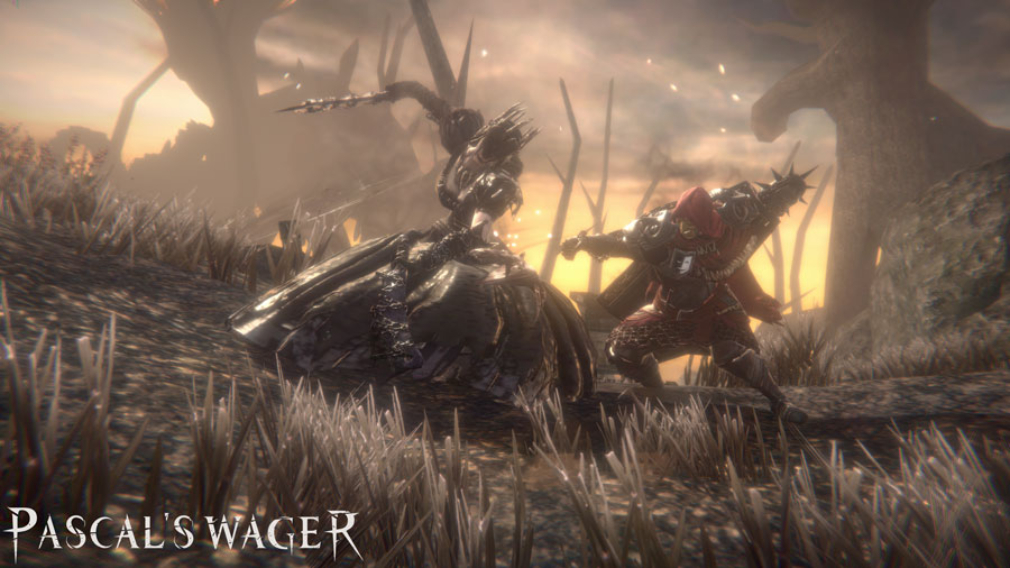 Despite my many issues with it, I'm definitely looking forward to playing more and seeing where, if anywhere, the story goes. My biggest hopes right now are that the difficulty curve remains consistent and that the later areas are more visually distinct. I've already gotten over the control woes, or rather I've adapted to them, and I'm still enjoying exploring its levels for shortcuts and hidden loot.

If I were to hazard a guess, I'd say that Pascal's Wager is going to please a great many players. It's delivered on the promise of an enjoyable 3D soulslike for mobile, though whether it lives up to its most obvious inspirations is another matter entirely.

It's important to note that the build I've been playing lacks the big day-one patch. I'm unsure of what exactly it's set to add or fix because I generally didn't encounter any bugs or major stability issues when playing on a 2019 iPad. I have no doubt it'll eat through your phone's battery like an absolute monster, but higher-spec devices should be able to handle it just fine.

Pascal's Wager launches for iOS on January 16th. You'll find it available for pre-order now over on the App Store.