With the full release on 19th December

Hoop League Tactics is an upcoming turn-based basketball game that's set for release on 19th December. However, if you like the idea of a tactical, turn-based sports game then you can hop into the beta now for both iOS and Android.

In a post on Reddit yesterday, the developer announced they are hoping to get some more testers in ahead of the release in 10 days to help add more polish to the game. So if you're interested in giving the game a try and are happy to provide some feedback, head over there and give your thoughts after you've spent some time with it. 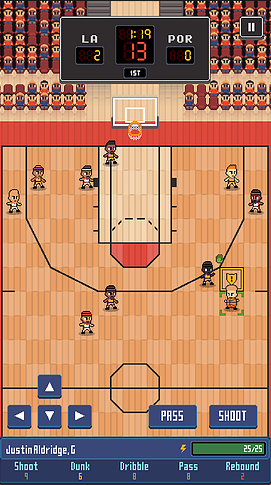 The game itself is a mixture of a management sim and a strategy game. During a match you'll pick from several options such as passing, shooting or moving. You'll be able to see each player's stats at the bottom of the screen so you can make your decision based on their attributes because it's turn-based.

Off the court, you'll be able to upgrade your team's stats using a skill tree as well as scouting the world for new players. You'll also have to manage your players' fatigue levels and negotiate their contracts with them to keep your team the best it can be. It all sounds very in-depth.

Beyond that, there's a whole host of customisation options that will allow you to make your team feel like your own. Team names, uniforms, court colours and player appearances are all aspects that you can customise to your own preferences.

Hoop League Tactics will be available on the App Store and Google Play on 19th December. Before then you can sign up to take part in the open beta on both iOS and Android. It will be a free-to-play game.