Sky: Children of the Light is a wistful, wonderful wander throughout cloudscape and dreamscape alike.

The next title from Journey creator Thatgamecompany is availble now. and the developer has somehow managed to build on almost every aspect of the award-winning platformer. Sky: Children of the Light is as close to a sequel to Journey as we may ever get, but rather than the forebearer's dusty orange lands, Sky (as the title hints) frequently takes to the clouds and has its adventurers exploring shared environments throughout those heavens.

I'll get to the windy clouds and other environments in a moment. The first and most important thing to discuss is the exceptional multiplayer experience. Throughout your journey you'll see shadowy ghosts travelling the same paths as you, lighting candles ahead of you and even completing objectives for you as they move along the same routes as you will. Each of these ghosts is another player and for everyone of them in front of you there might be ten behind you. In time you might find them journeying along with you too. Regardless of where they are on their joureny, they are there for the same reason as you - to explore the worlds and restore the stars to the heavens.

There's an indescribable sense of cameraderie at play throughout the whole experience, something beyond that of the co-operative modes of most other games - where objectives often feels forced, and teamwork is required rather than optional. Instead it all feels like something of a shared expedition, each path crossed feels like a moment shared... because the human population of Sky: Children of the Light's world is there, as I said, to do exactly the same thing as you.

This sense of a shared journey is enhanced because Sky lacks most 'standard' methods of communications, much like Thatgamecompany's previous title. You can't type out paragraphs in a global chat channel, you can't gob out instructions over a microphone to a party of your comrades. In fact most interactions are limited to either the sharing of a flame by merging candles, or taking the hand of another. If you do share your candle then the character becomes visible, and if you continue to interact with them then you can even assign them a nickname so that you can pick them out from the crowds later on. 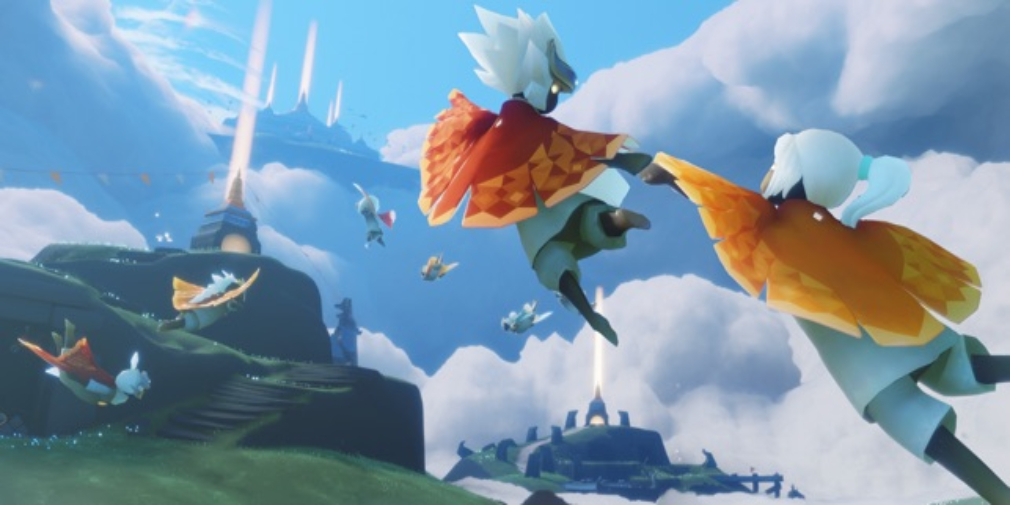 Alongside all of this there is the gesture system. Throughout your journey you come across the ghosts of those who came before. By tracing their steps and observing their story you can learn gestures which can then be deployed at will. These gestures are not used for puzzle solving or anything, strictly communication, but they add to the multiplayer fabric which makes the game more than just an artistic 3D-platformer.

Sky: Children of the Light isn't just captivating because of the friends you'll make along the way though. Each of the levels, from the tiniest cluster of three islands through to larger, sweeping frozen wastes, have their own identities. From the lush grasslands to the soot-soaked volcano, each area is impossible to confuse with another. Each of these areas are broken up into smaller instances, while some of these are large and sweeping (especially a skiing-style one later) many of these are actually small, puzzle-based areas. This is a strange contrast and creates an uncanny valley effect as you make your way through more and more areas. I started to experience a nagging feeling and it became hard to ignore that larger areas felt walled in while early levels feel wide due to them being surrounded by unreachable oceans or blankets of clouds.

You can finish your first run as a 3–4 hour experience, and there's an extremely emotional ending in place to tie a bow on your quest to free spirits and restore the stars. There's also a secondary ending available for those who invest more time into exploration and the multiplayer. To be frank, you'll find it hard to keep pushing forward for that ending.

Sky: Children of the Light is available now on iPhone and iPad, and will release for Android and Apple TV in future.

Sky: Children of the Light

A beautiful experience which delivers much more than a standard 3D platformer through a fully realised multiplayer system.
By Dann Sullivan
| Jul 22, 2019 |
iOS
Find out more about Sky: Children of the Light
SEE COMMENTS