A lot can happen in a decade. The last time we received an entry in the Marvel Ultimate Alliance catalogue, DC was the hot property with 'The Dark Knight' taking superhero films to the next level. At the time Marvel had barely kicked off its universe: Iron Man was warmly received but the tepid Incredible Hulk flick left many apprehensive of what the studio was planning. Now the tables have turned and Ultimate Alliance has returned featuring some of the most recognisable characters on the planet.

The Black Order follows the Avengers, X-Men, Guardians, and more as they look to stop Thanos from assembling the Infinity Stones – ergo Infinity War/Endgame. However, the story is brand-new (Infinity Gauntlet influences aside) changing up numerous elements and keeping players on their toes throughout. For those expecting a narrative the quality of Marvel’s Spider-Man, you may be disappointed, although what is packaged within is super satisfying and instantly replayable.

This does put a smile on my face

What with the game featuring a campaign of over 35 playable superheroes, some liberties obviously needed to be taken to bring the ensemble together. It doesn’t matter really though as each new introduction filled me with glee, putting a smile on my face. Each blend of comicbook/cel-shaded graphics burst onto the Switch screen gorgeously, whether blown up on a big-screen or taking down convicts on the move.

There’s a fine balance too, when it comes to the character choices. The obvious big hitters like Captain America, Thor, Hulk and Wolverine all feature but it’s the addition of more niche characters like Ms. Marvel, Crystal and others - that I don’t wish to spoil - that make the roster supreme.

The greatest compliment I can bestow upon the gameplay is that it truly feels like a classic brawler brought into the new generation. It’s frightfully addictive, and the nature of levelling up fighters will see players who have attained the same itch pour hundreds of hours in.

Still, it’s worth being aware that those who do commit to long play sessions may experience camera trouble from time to time, as occasionally walls and surroundings will cloud protagonists view. A restart checkpoint button in the menu is amiss too, forcing a timewasting exit to the home screen. 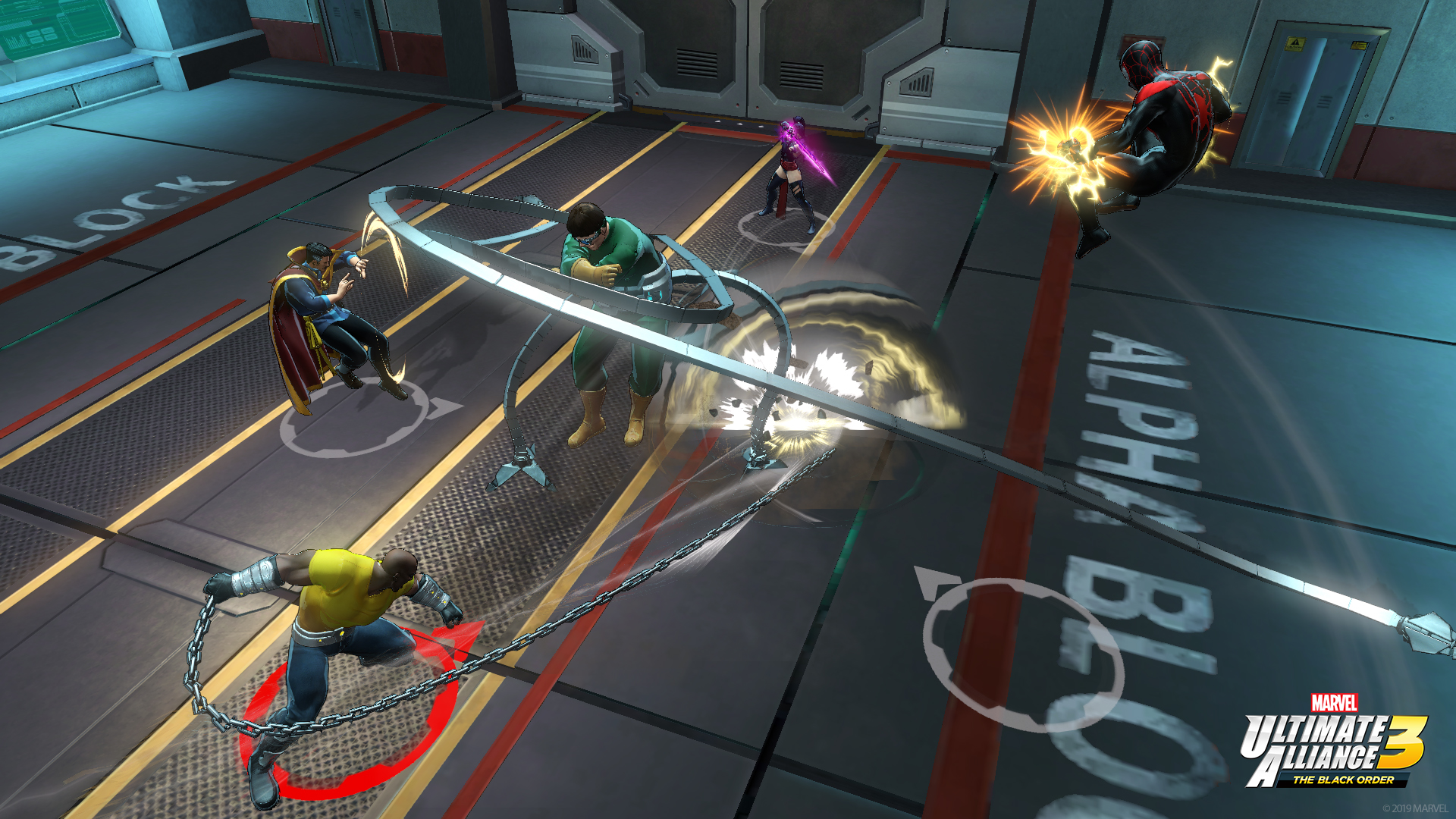 Each superhero can be expanded upon significantly, with special moves unlocked every five levels until culminating at level 20. There’s also the Lab that allows for enhancements across the board to your squad, as well as ISO-8’s, which are compounds that can be deconstructed/reconstructed for modifier bonuses.

It’s a lot to wrap your head round but MUA3 introduces it all gradually, keeping things interesting to the end. ISO-8s could have been left out for my tastes though. Possibly Hank Pym would enjoy their inclusion but they feel more like busy work than anything worthwhile.

It’s not an easy journey to completion. Numerous times I was forced to leave the main story to train my fighters, only to return for revenge later on. This brings us to Infinity Rifts: here players are set challenges that require certain circumstances to be filled in order to gain experience and unlock rewards. All of which go to powering up your party, excluding special costumes.

Having someone at your side for these tasks makes the ordeal go much more swimmingly, so the inclusion of both couch co-op and online play is certainly welcome. A fair degree of filtering can help pick precisely what stage you need help completing, however finding someone was definitely a chore pre-launch. 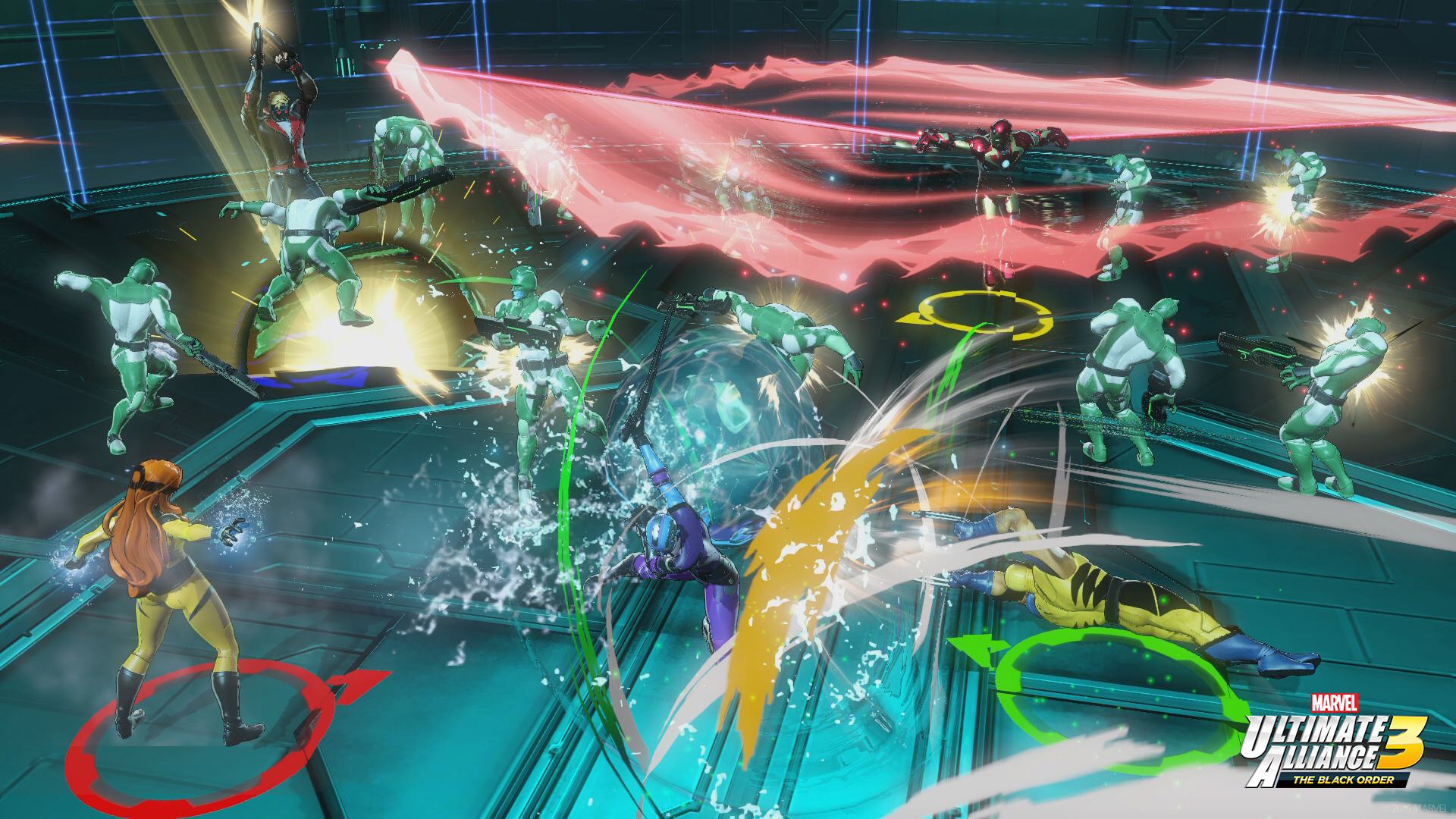 I understood that reference

While it’s no Alan Silvestri Avengers theme, the music is serviceable throughout, albeit nothing that will blow your mind (stone). Voice acting on the other hand is stellar, with Yuri Lowethal taking the role of Spider-Man for the second time definitely being a stand out. Equally I must mention Ultron for the wrong reasons, who sounds like a Cyberman from the seventies and comes off as laughable.

It’s very clear how a lot of the superheroes have been inspired by the MCU, with the Guardians effectively being carbon copies. Not a bad thing at all but it’s useful to differentiate at times, as Crystal Dynamics' Avengers found out.

The repeat and rinse formula of smash all enemies, move onto the next group, and so on may not seem attractive from those peering in but right now, it’s exactly what I needed. Not every game has to reinvent the wheel. Some just need one solid concept and MUA3 does that in the best way possible making for some of the most fun gameplay in 2019. Suit up.

For more reviews of the latest, and greatest, titles, check our our review section