Everything is better with a whip. That's just a fact. It's a wonder why more games don't include whips, because they'd surely make everything infinitely better.

City of Brass has a whip. In fact, this roguelike FPS is all about using the whip in various ways, and it's the perfect example of why whips make the world a better place.

The rest of the game… not so much. Its swordplay is dull, its graphics are a bit muddy, and it can't quite find a balance between nails-hard and stupidly easy. But it's got a great whip.

Each run of City of Brass starts with you picking out your class, though there's not much difference between them. Each comes with a melee weapon for killing things and a whip for doing everything else.

You're then plonked into a procedurally-generated world, battling your way from level to level and trying to get as far into the game as you can before you inevitably get murdered to death by skeletons.

Each level is a maze to navigate, but you've got a trusty compass at the top of the screen to point you in the right direction at all times. 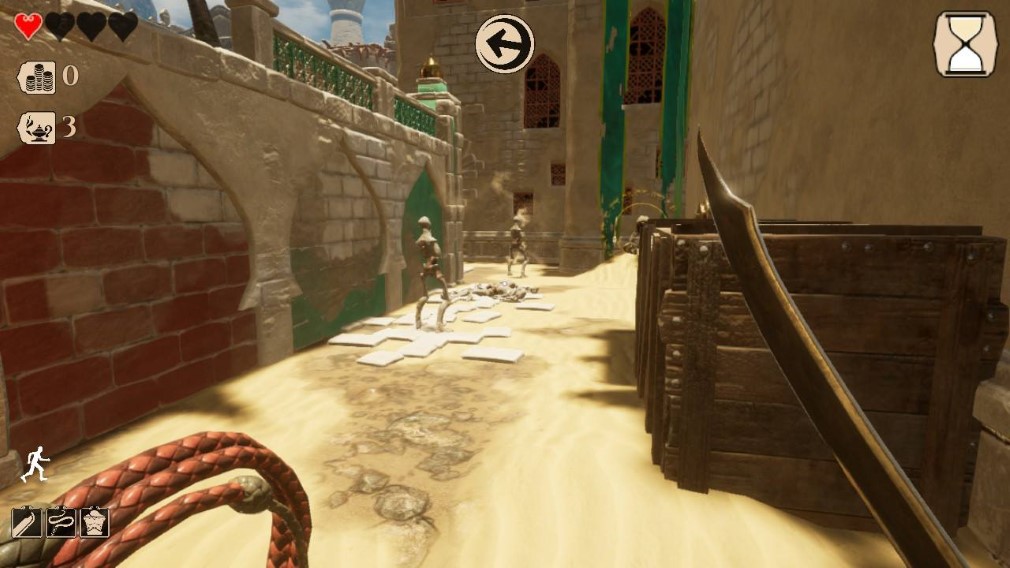 It's particularly helpful given that each level comes with a time limit, which is a major annoyance when what you really want to do is go around looking for treasure to boost your score.

Instead, you need to balance your kleptomania with your remaining time, and make some split-second calculations to decide if you need to leg it to the exit, or if you have a bit more time for skeleton killing.

Said skeleton slaughter mostly involves just swiping at them with your sword or whatever weapon you have, but your trusty friend Mr Whip also plays an important role here.

With the whip, you can stun enemies by smacking them in the head, remove their weapon by targeting their arm, or simply trip them up with a deft swipe at their feet.

The whip can also be used to pull enemies towards you for a good smacking, activating traps so you don't step in them and take damage, or to carry yourself over the map by attaching it to the odd hook which appears in levels sometimes.

Whipping is glorious fun - you'll find yourself using it to grab every item you see and to initiate every combat encounter. In fact, if you took away the whip, City of Brass wouldn't be nearly as enjoyable as it is.

For starters, and I apologise for being an old man about this, it's too dang hard. Your first runs in City of Brass will end in less than two minutes as you scarper around the world, getting hit by the abundance of traps and wealth of enemies thrown at you before you fully understand what's going on.

There's no learning curve here - it's just nails-hard from the very beginning. And with a timer constantly egging you on to go faster instead of taking your time and being careful to avoid traps, it all gets a little too overwhelming. 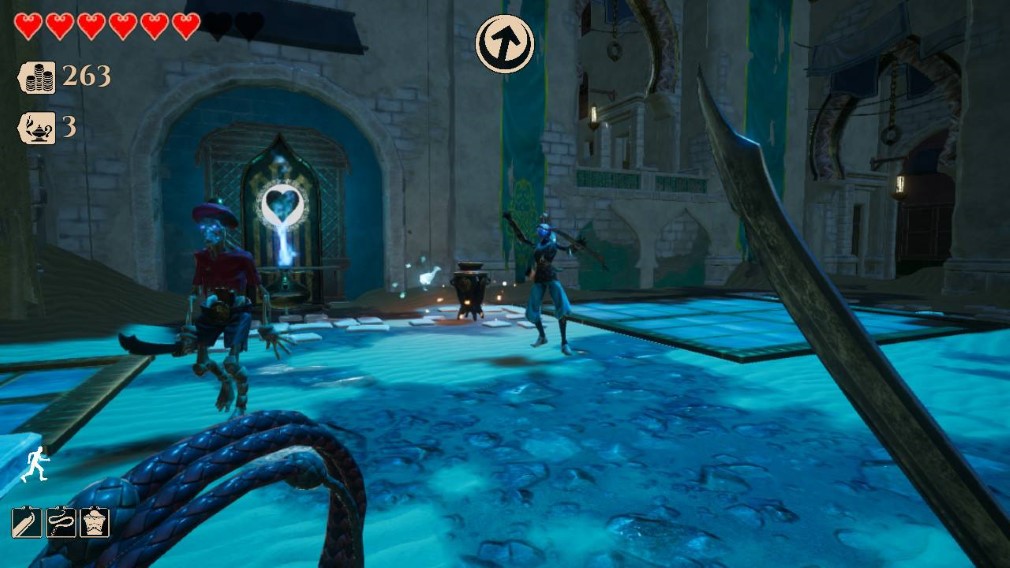 You can add game modifiers to make it easier on yourself, and the only downside here is that you can't get on the leaderboards if you turn them on. These include giving yourself extra lives, removing the timer completely, and reducing the numbers of enemies and traps in each level.

But it just feels kind of wrong. Whack on every modifier and you'll have an almost too-easy time getting through the game, all the while feeling like a fraud because you simply couldn't hack the game is it was intended to be played.

City of Actually Let's Not Say That One

There's not even much here to make you want to "git gud". Whip aside, there's nothing in City of Brass you haven't seen before, and graphically it's nothing to write home about either. The game feels as lifeless as the city you're robbing is supposed to be.

Still, if you're into your roguelikes and you want to whip the hell out of everything you see, then this is definitely the game to do it in.

If nothing else, City of Brass does have mighty good whip play. It's just a shame the rest of the game isn't as interesting or intuitive as a length of leather.

City of Brass has a great whip, but the rest of the game could do with some polish
By Ric Cowley
| Feb 7, 2019 |
Switch
Find out more about City of Brass
SEE COMMENTS