You can probably expect quality from Feral Interactive after its mobile port of ROME: Total War and epic racer GRID Autosport, and Tropico doesn't let the team down. You've played city builders and management games before, sure, but this is easily one of the best on the market.

It's richly detailed, responsive, engaging, and fun above all else. It may come with a hefty price-tag for a mobile game, but there's a reason for that. Though it started off on PC, it feels comfortable on iPad with top-notch graphics and a fantastic soundtrack.

You kick things off as El Presidente, ruler of the island of Tropico, and need to do whatever you can to keep your people happy in one way or another. It's not just about providing enough food and affordable housing during your term in office, you need to keep a watch of lazy workers, potential rebels, military coups, and so on. It ain't easy being in charge, you know.

There are a bunch of different Presidentes you can rule as, each with their own individual traits, and over a dozen islands to play in the main campaign. With two levels of tutorials to go through (I'd highly recommend not skipping this step) it can feel a little bit overwhelming at first to keep an eye on everything, but the more you play the better you get. 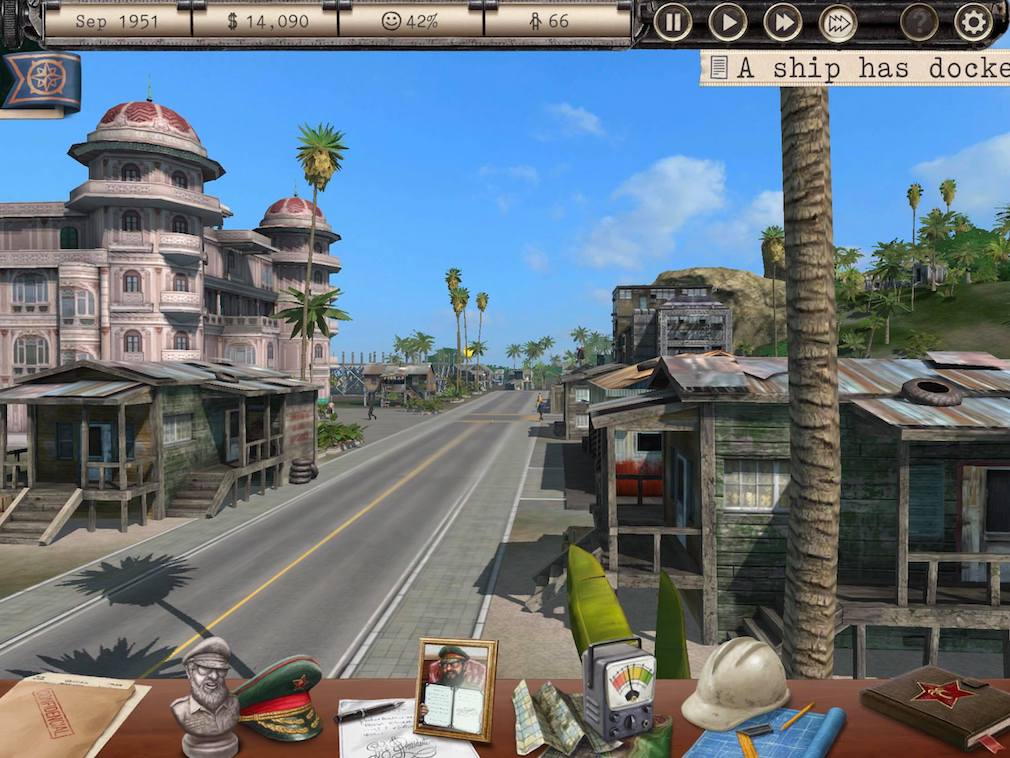 At first you're building medical centres, better housing, farms, schools, and demolishing shacks to satiate your people's needs. Of course, there's no pleasing everyone as you face everything from peaceful protests to rebel attacks.

During your reign you have a bunch of different decisions to make that affect Tropico and its citizens. You can choose whether to pocket generous donations of give it back to the people, ask for foreign aid in exchange for set export prices, whether to give people the wages they demand, and much more.

You also need to decide which edicts to serve, like banning same-sex marriages, making sure people have two good meals a day, and declaring national holidays. Depending on the decisions you make, these have a huge impact on the game's many different factions.

The factions basically determine whether you stay in power or not and represent different sections of the people. From military to loyalists and communists to religious folk, they each have their own set of needs and demands. You can keep an eye on these and the general happiness of the people through the Almanac.

This all sounds overwhelming I'm sure, but you can click on the question mark at the top of the screen for assistance at any time.

Performance-wise the game runs like a dream with no drops in framerate, crisp graphics, and fluid controls when navigating the map. Despite it starting off as a PC game, Tropico feels right at home on iPad with touchscreen and gesture-based controls to adjust zoom and the viewing angle.

The introduction of the Dictator's Desk is a real positive in terms of productivity and ease. With so much going on and so much to keep an eye on in-game, the Dictator's Desk gives you an easy way to pull up the construction menu, see building plans, or whip out the Almanac. 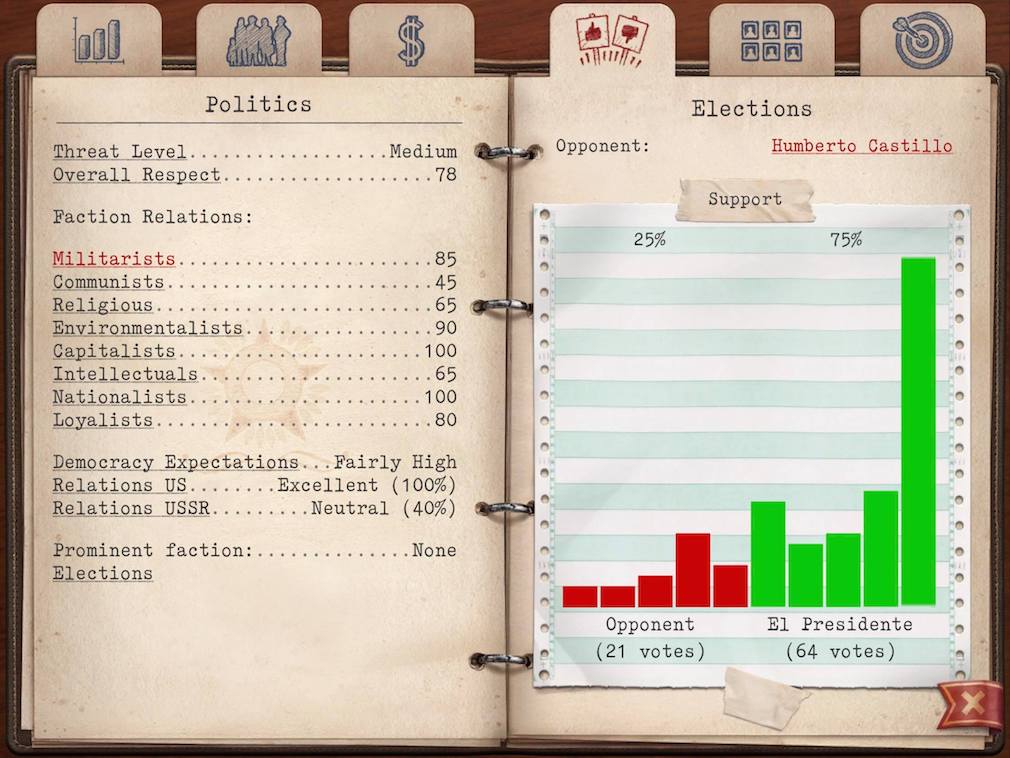 If you don't fancy the structure of Campaign mode, you can also have a fiddle about in Sandbox mode. This gives you more freedom in how you want to play, offering up a variety of islands and difficulties, or you can create your own exactly how you like it.

There's a lot going on in Tropico, more than I can say or describe in the words I have, and it does feel pretty daunting at first. However, once you've sunk into it, made some mistakes, and played around with all of the options, it's an addictive and seriously engaging strategy game that's hard not to love.

It's tough and a bit laborious at times, and can be frustrating when you can't figure out how to do certain things, but help is never far away. Feral Interactive hasn't just rushed the port and thrown it up on iPad, you can tell that a lot of thought and planning and energy has gone into making it the best it can be.

Whether you're in the market for a strategy game or love complex city builders, you'll not be disappointed here.

Want more? Check out our growing collection of Tropico articles!

Tropico is a complex and highly detailed mobile port and it works on pretty much ever level
By Emily Sowden
| Dec 21, 2018 |
iOS
Find out more about Tropico

Guacamelee! 2 review – "DrinkBox's latest is the finest platformer of the year"