Zach Gage, the smart cookie behind Really Bad Chess and Flipflop Solitaire, has turned his attention to virtual pool - and he's found it wanting.

As Gage himself explains, "nearly every pool game is either a vastly dumbed down version of 8-ball, or a flight-simulator level of fine-grained controls". True that.

He also realised that playing against an AI opponent is fundamentally unsatisfying, because they're either deliberately giving you a chance or else blowing you off the table. Also true.

All of which would be for nothing if his single player-focused solution wasn't absolutely brilliant. Which it is.

Pocket-Run Pool cares more about the essence of pool than the fine detail.

It wants to nail the feeling of whacking a cue ball really hard, and of squeezing in a delicate cut. Conversely, it doesn't give two hoots about proper sequential scoring or applying the appropriate level of check - neither of which is present here. 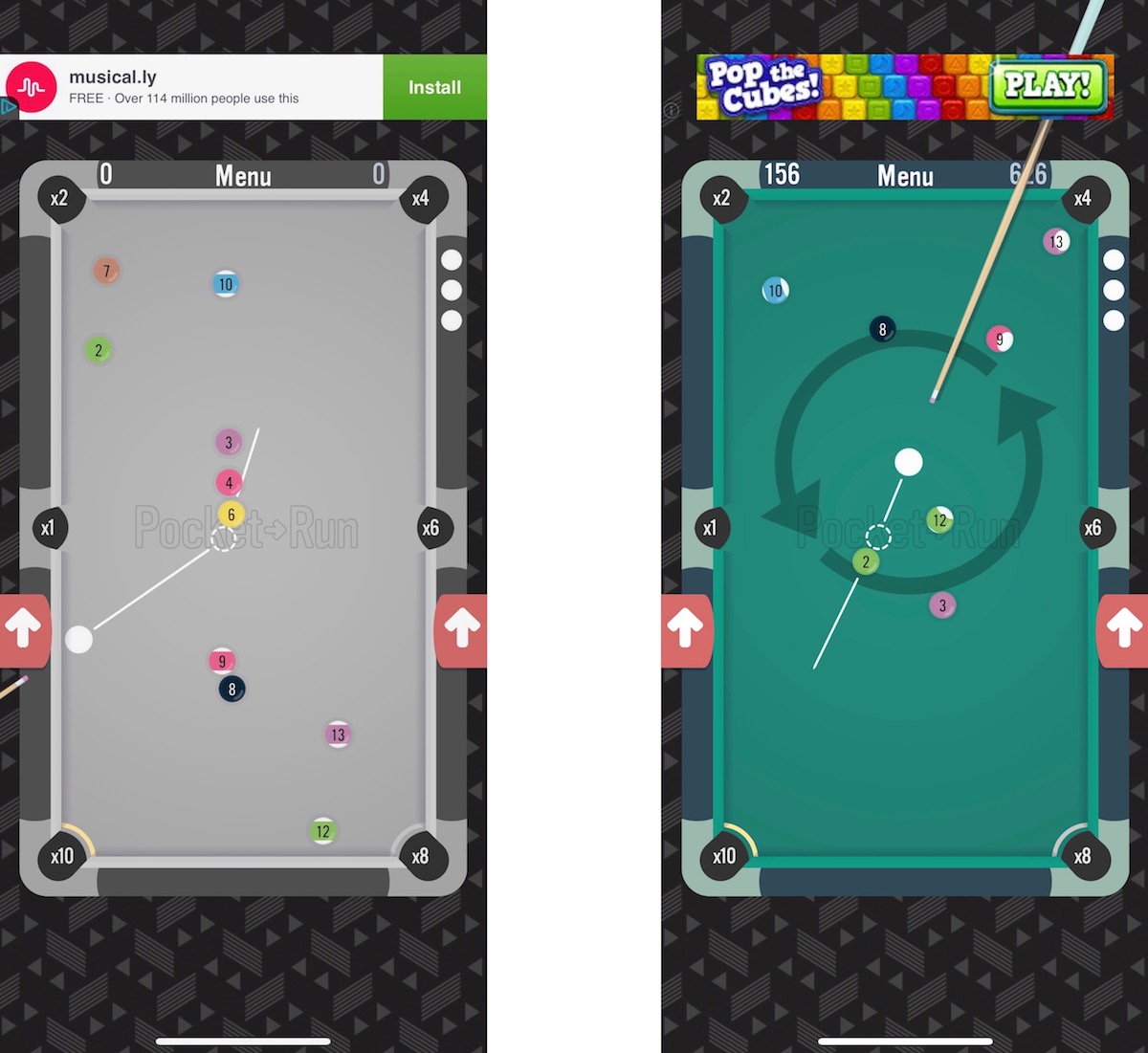 To that end, Pocket-Run Pool adds an ingenious yet simple scoring system that never lets you settle. Each pocket has a set score multiplier attributed to it, from 1x through to 10x. Every time you pot a ball, those values rotate one place. When you pot the 8-ball, they rotate at random.

You have just three 'lives' - essentially free passes to miss a pot or sink the cue ball - at your disposal in all of this.

With these two additions, you suddenly start to question yourself at every turn. Sure, you can make that short pot to the middle, but that's just a 5-ball with a x2 multiplier. You could probably cut that 13 ball into the x8 corner instead, but you just wasted your last life tapping the 12 ball away from the cushion.

Pocket-Run Pool supports this solid, creative foundation with three distinct modes. The least interesting of these is the no-frills Standard Run.

Things get more interesting with Insta-Tournament, which plays out a bit like a daily challenge, but is much more frequent. You're given a break scenario, and tasked with cleaning up as well as possible. At the end, you're ranked on how well you did against other real players. 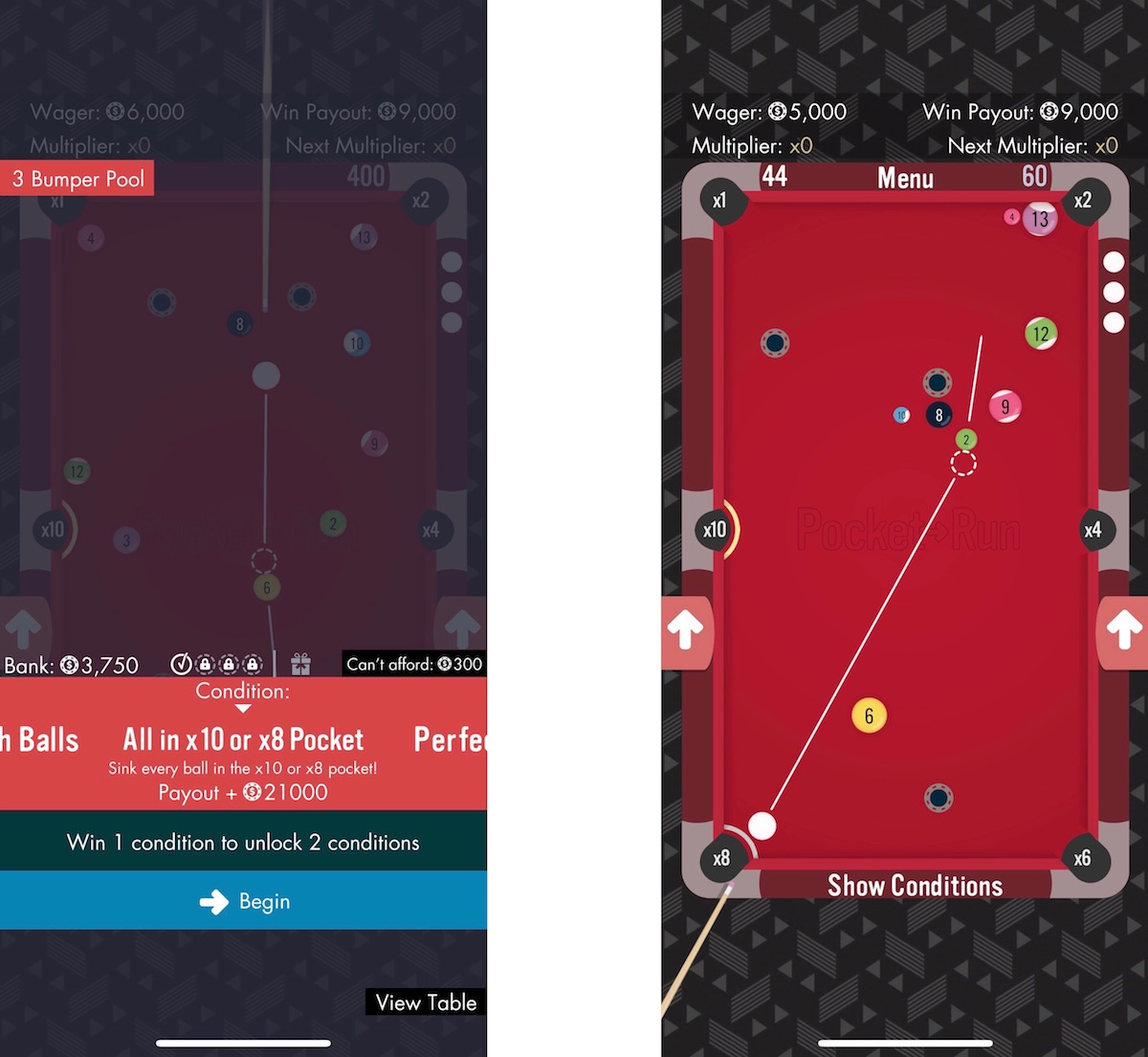 By far the most interesting mode here, though, is High Stakes Pool. This asks you to wager some of your virtual currency on the outcome of a match. The wager can be multiplied by agreeing to random Conditions - quirky rule-changes that really mix things up.

You might get a bunch of death balls, the potting of which means game over. Or, you might get pinball bumpers place on the table, adding a dose of unpredictability to those power shots. Perhaps the balls change size, leaving some teeny-tiny and others so large they barely fit in the pockets.

Pocket-Run Pool never prods you to bet with your own money, but it does have a virtual currency that you can top up by watching a short ad. You can also use cash, but that's really not necessary.

In short, it's a system that genuinely serves the gameplay rather than feeling exploitative.

Indeed, you sense that every little decision in Pocket-Run Pool has been made after careful consideration of how it will affect the gameplay. Even the simple, unshowy presentation and muted lounge-jazz soundtrack speaks to the creator's impeccable taste.

After Really Bad Chess, Flipflop Solitaire and now this, you have wonder which classic physical game is set for a Gage revamp next. Whatever it is, I've already got my money down on the table to play it.

Harry's hot takes: 5 other franchises we'd like to see getting the Pokemon GO treatment

Pocket-Run Pool is leveling up to version 2.0 tomorrow