And it's arriving this week!

Having thoroughly explored the world of word games and various renditions of solitaire, prolific game designer Zach Gage has revealed his next project, Pocket-Run Pool. Gage has teamed up with fellow indie developer Denver Coulson to create this unique spin on the classic game of billiards.

Pocket-Run Pool places 10 balls on the table with changing score multipliers in each pocket. Each time you make a shot, the multiplier will change. Your goal is to get the highest score possible, but the stakes are quite high—if you miss three times, it’s game over for you. 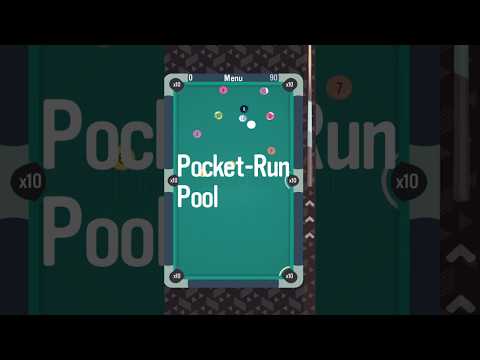 You’ll choose from two arcade modes—Standard Run and Break of the Week. Break of the Week is essentially a weekly challenge where you’ll be competing against others to get the highest score using the same break as all other players.

If you’ve a penchant for competition, there are also Insta-Tournament and High Stakes Pool modes which you can access using the game’s currency. In the Insta-Tournaments, you’ll collect chips by playing against other real-life people, which you can then wager in the High Stakes Pool to win big or lose it all. If you do lose, you’ll have the option to buy back your chips by watching ads or via in-app purchases.The game is set to be free-to-play with ads, though there is an unlockable premium version that removes advertising and gives you access to every game mode.

Apart from this upcoming title, Gage is well-known for games like SpellTower, FlipFlop Solitaire, Ridiculous Fishing, and Really Bad Chess.

Pocket-Run Pool is leveling up to version 2.0 tomorrow