Brew Town review - A hipster's paradise or a flat, hot pint of something cheap and nasty?

Craft beer is one of those odd recent developments that caught on with a certain set of people for some reason. Brew Town poses a question - is there a crossover between people who love esoteric booze and people who play free to play sims?

Although to be honest, it's not a question that really needs an answer. The meat of the game could be wrapped around any sort of stick and the outcome would be markedly similar.

This is a solid simulation with some good ideas, some great ideas, and the same repetitive nature that puts a lot of people off the genre.

It's a familiar rhythm, but there are some nice twists here. The best of them is the ability to design your own cans and bottles. There's a solid image editor, and you can share your creations with other players who'll judge them accordingly.

You need to play around with your recipes too, adding new flavours to the mix in a series of needle-stopping mini-games. 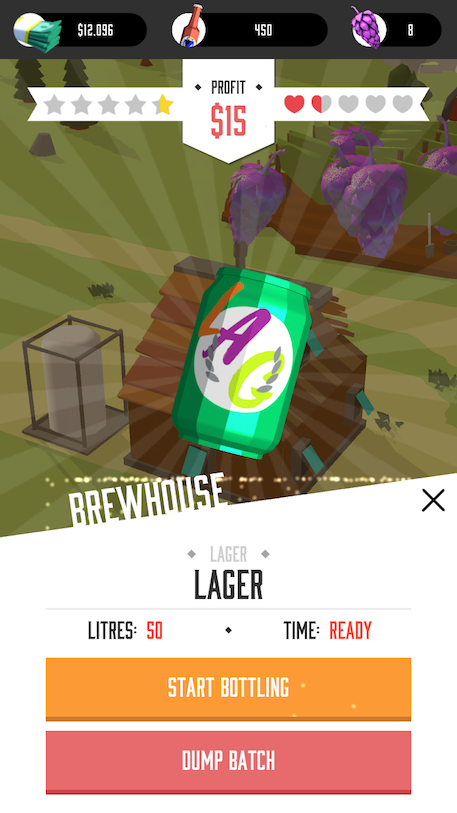 There are a bunch of challenges to complete every day, which get you more currency. And when you've completed certain ones you can change the hops you use to brew your drinks.

This resets most of your progress, but it also means you earn more money with each bottle that you sell. It's a risk reward sort of thing, although you never really feel like you're losing anything.

The art style here is great, and there's clearly been a lot of thought put into every aspect of the game. But, at the end of the day, it's stolidly a sim. And if you don't like sims, there's nothing here to change your mind.

Brew me a favour

Brew Town is a good sim game, and if you love mixing business and pleasure then its undemanding nature makes it the perfect game to dip into from time to time.

No, it's not a revolution, but there's enough here that fans of the genre are going to find something to like. Plus there are some incredible beards, which is never a bad thing if you ask me.

Brew Town is a pleasant, undemanding sim, that hits most of the right notes, as well as adding a few new ideas of its own
By Harry Slater
| Apr 20, 2018 |
iOS + Android
Find out more about Brew Town
SEE COMMENTS

If you break your Nintendo Labo pieces you can get replacements, but it'll cost you

Start a new hipster trend with your own craft beer in Brew Town, arriving tomorrow on Android and iOS