ChronoBlade doesn't muck about. It's a big, violent brawler that sits squarely in the midcore range of mobile entertainment, although you shouldn't let that put you off too much.

It looks gorgeous, there's plenty of punching, and four different characters to choose from as well. No, it's not perfect, but then you never thought it was going to be, right?

It's a blunt object. A powerful force. It's a smashy-bashy blob of silly chaos that you sometimes feel like you're in control of. And, it does exactly what you want a game like that to do.

Set in a dismal, mythological future, you're humanity's last hope in a war against evil robot aliens. It's up to you to punch, kick, and slash them in the face until they fall over. After all, conflict resolution probably isn't your strong point.

The violence here is surprisingly robust. Levels are cut into bouts of action that see walls closing in on you and monsters spewing forth. Batter them all to death and you'll move on to the next section. Rinse, repeat, big boss, rewards.

It's a familiar rhythm, and if you're groaning at the thought of it then this definitely isn't the game for you. But it's far more accessible than other action RPGs of the same ilk, and that's the game's trump card. 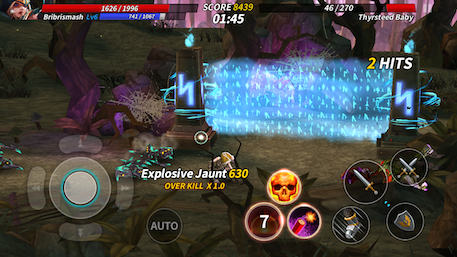 Where other games seem to love stealing your agency from you, ChronoBlade makes you feel like a thug. Your attacks have weight, and even though it's unlikely you're ever going to be in trouble for the first few hours, trying to get through levels without taking a hit does require some skill.

There are plenty of menus, upgrades, currencies, and gems to fathom out, but the core beat of the experience - fight, power-up, fight some more -is slick enough that you're not going to have to dig too far into the freemium if you don't want to.

No, this isn't the sort of game where you're going to be perfecting combos and dancing away from attacks with grace, but the button mashing is elevated a little above others of the same ilk, and that makes for a more rounded experience.

Not that there aren't problems here. The genre is inherently a grind, and when you eventually start taking a beating you're going to need to head back to earlier levels or start spending real money if you want to progress.

But the slick presentation and slightly different styles of the cast of characters at least makes for a diverting, if not exactly interesting, grind. And discovering new monsters and unlocking new moves keeps things reasonably fresh.

Where other games have heart, this one has fists. Big, punching fists. And swords. And hammer hands. And while it's never going to stick in the memory like the side-scrolling brawlers of yore, there are far worse ways that you could spend your time.

It might lack a little when it comes to grace, but there's a crunching brawler here that's well worth checking out
By Harry Slater
| Mar 6, 2018 |
iOS + Android
Find out more about ChronoBlade

It's the first TableTap Twitch stream tonight, and this is why you should be excited