Diablo 2 designer Stieg Hedlund is working on a side-scrolling brawler for iOS, Android, and Ouya

How's this for a game development dream team?

Dave Jones, one of the creators of Grand Theft Auto; Tony Harman, former president of Realtime Worlds; and Stieg Hedlund, the designer of legendary dungeon-crawler Diablo 2.

Imagine what they might come up with. In fact, don't bother. What they've come up with has just been announced, you see.

ChronoBlade is that game. And in spite of its slightly generic name, it looks like an interesting take on the side-scrolling brawler. 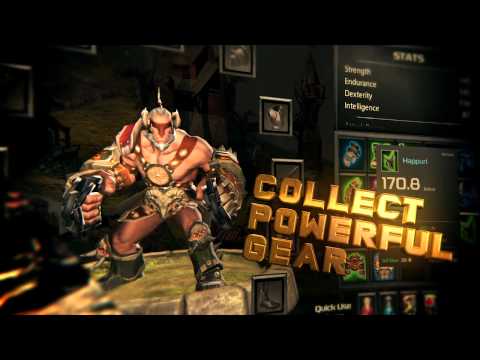 In ChronoBlade's multiverse of different worlds, you are cast as a hero who's out to stop a cosmic invasion by some evil aliens.

Cue lots of of loot grabbing and 2D scrapping, as you punch and kick your way through an army of foes. Your hero levels-up and gains new skills as you brawl, with plenty of armour and weaponry choices at your disposal.

ChronoBlade will also feature PvP and co-operative multiplayer, with each hero boasting around 30 different attacks.

This free-to-play game will be released on iOS, Ouya, Android, and web browsers.

The open beta phase of the browser version is due to begin imminently, and an Ouya demo should be materialising soon, too. We'll let you know when we get any more information about release dates for the iOS and Android versions.