Mulaka is the sort of game you know you're going to like, so long as it avoids the type of gameplay that can sometimes grind down low-poly adventure games.

Its ultra-simplistic design may be pretty, but it also means it's got to show off a reliable foundation to avoid it falling into the 'arty-but-forgettable' category.

Thankfully, it pulls it off, making for an interesting and informative experience with a only few negatives to remark upon.

Children of the stars

Mulaka is a 3D action/adventure game based around the indigenous Tarahumara tribes of northern Mexico. You take your place as a Tarahumaran Sukurúame (shaman) heading from level to level fighting the world's foulness and corruption.

The main focus of each level is to gather three stones to open up a blocked-off path. This ultimately leads to a big boss fight torn straight out of the tribe's lore.

Once you've taken the beasts down, you'll come face-to-face with different demi-gods who help you on your journey. 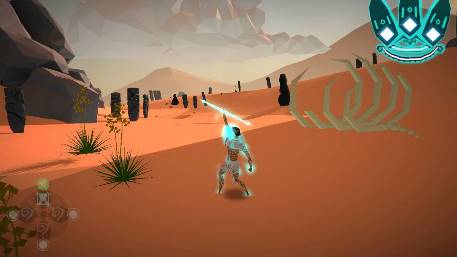 Everything in the game is based on the real legends and mythology of the Tamahumara people. The narration, design, and music is also an authentic representation of the culture, and that's a nice touch.

It's easy to come up with a concept, but the devil really is in the details. It's nice to see that Lienzo has gone above and beyond, capturing even tiny details to put into the game that reflects the culture, allowing us, as outsiders, to actually experience it.

Its art style is simplistic, vibrant, and practically pops out of the screen. As you go, you also gain new abilities from the demi-gods to aid you in your quest. While you battle your way through the lands you're also able to buy new skills, like having your spear regenerate faster.

Though the combat system isn't exactly something to scream about, it does the job well. You've got a spear with a quick attack (which does less damage) and a strong attack (which is slower to use). You can also throw it to get hard-to-reach enemies and items.

Aside from the combat, you can use your 'inner-eye'-like power to see the unseen, jump and roll to avoid enemies, and sprint like there's no tomorrow. Again, this is a necessity in the game considering the Tamahumara's legendary sprinting reputation.

You've also got access to different crafting recipes on the Switch's d-pad which lets you create and use helpful items like bombs and health potions.

While I'm a huge fan of different mythologies, others might find the text and dialogue a bit wordy. At least by skipping big chunks of copy you don't actually miss out on that much, only context, which some won't be that bothered about.

Guardian of the world

While Mulaka is a joy to play there are a couple of niggles here and there. As I mentioned before, the combat system lacks imagination and loses its challenge after a while.

Its enemy types also grow thin a few hours in, despite there being specific enemies for each region. It may look plentiful visually, but after you've been fighting for a while the main thing that trips you up is the sheer number the game wants to throw at you. 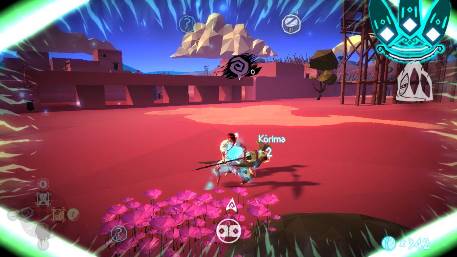 One major feature I'm surprised isn't included is a lock-on that lets you toggle your attacks when you're in combat. Though the battles aren't exactly impossible to fight without it, it would've been a nice detail to be able to work around – especially when you're taking on aerial foes.

There can be a few frustrating and awkward moments, especially when you get knocked down constantly in combat when enemies barrage you one after the other, but Mulaka isn't a bad game.

It's one of those titles which offers up a nice experience for the time you’re playing, and though it's got a good eight hours of content under its belt it's definitely better played in small bursts to sustain interest.

Though its story isn't particularly strong, I've come away with a deeper fascination about Tamahumaran mythology, but that was bound to happen. I'm just a huge nerd, after all.

Mulaka is a striking and interesting adventure with a few small let-downs
By Emily Sowden
| Mar 19, 2018 |
Switch
Find out more about Mulaka
SEE COMMENTS

Nintendo is airing a new Nindies Showcase dedicated to the Switch