What do you want from a digital adaptation of a blockbuster movie? Is it some sort of dull third person action adventure that clunks along without capturing the spirit of the film it's based on?

Or is it an experience that takes a bunch of genres, mashes them together, and comes up with something that feels a little bit like it fits in with the mythos of the world it's meant to be expanding on.

If you said the second thing, then you might like Jumanji: The Mobile Game. It's by no-means perfect, but it does have quite a lot going for it.

Board of this pun yet?

Essentially the game is a board game. You're controlling a little figure based on one of the characters from the new film, and you're rolling dice to move around a simple board.

It's sort of like a dumbed down version of monopoly. Land on a square and you can build on it. Unless your opponent already has a jungle hut there, in which case you need to fight them or pay a toll.

You've also got a deck of cards, and that comes into play the deeper you get into the experience. Imagine Clash Royale but turn-based and with some dice, and you're about 67% of the way there. 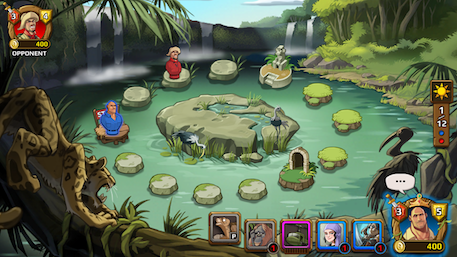 There are three ways to win here. Either you're the player with the most gold at the end of the 12 turns, you manage to cover one chunk of the board with your own properties, or your opponent goes bankrupt.

It adds a level of strategy to proceedings, and makes you think about your purchases. There's a secret temple where you can gamble, and a map square that lets you move anywhere on the board.

The property you own generates cash when you pass the start square on the circular board. Fights themselves are simple cases of rolling a dice, totting up the figures with the strength of the two players, and seeing who's got the highest number.

Then there are those cards. These give you special moves, both passive and active, and mean you can turn the flow of a game in your favour. Smooshing them together upgrades them, and you can build and change your deck as you play.

Is it the perfect Jumanji game? No. And its free to play trapping are going to put some people off. But if you don't mind a few wait-timers here and there, you'll actually find a pretty solid experience here.

Plus you get to play as The Rock sometimes. And The Rock is the greatest human being who ever strode manfully across the surface of the planet.

A slick and well put together free to play board game. It's not the greatest game ever, but it's worth a look
By Harry Slater
| Dec 18, 2017 |
iOS + Android
Find out more about JUMANJI: The Mobile Game
SEE COMMENTS

Collect delicious recipes and face off against evil in Sweety Kitty