Touchdowners review - It's American football, but not as we know it

Touchdowners is full of the sort of chaos we've all come to expect from Colin Lane. It's a silly interpretation of American football, but it adds a lot of new concepts into the mix that takes the game a step on from the dev's earlier titles.

It's still by no means a sim, but there's more than just playing for laughs here. There's a level of skill, or at least decision making, that means quite often you're going to be on the edge of your seat.

And that's really all you want from a sports game. Sure, it's not that much like a game of American football, but that's really not the point.

The game sees you controlling a team of three football players. You've got three buttons. One moves them left, one moves them right, and the third lets you toss the ball. Ostensibly it's a pass, but more often than not it's a tactical chuck.

Your players all move at the same time, but that rarely means they're moving as a group. The carnage of the game will see them bouncing all over the place, bashing into each other and the opposing team. 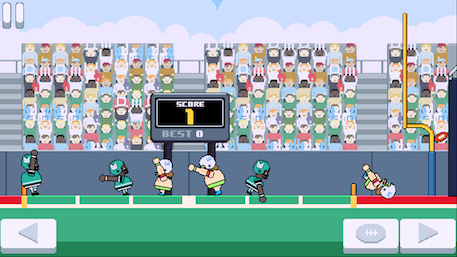 You score points by touching the ball to the ground in your opponent's endzone. It's not just a case of getting there, and that's where a lot of the tension comes from.

Frantic tapping scraps happen at the edge of the pitch as you try and grab the pigskin back before the other team can touch it to the ground.

Once you've grabbed it there's often a panicked toss upfield before the whole thing plays out again, only with you trying to score this time. 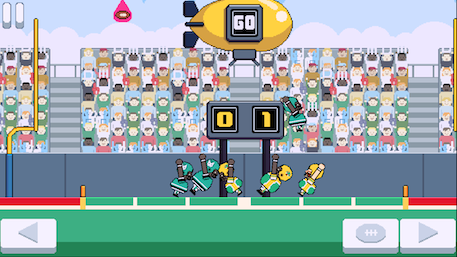 It's end to end stuff in the very best sort of way. In career mode you're playing first to three, and things get incredibly tense when it's two points all and you're in a desperate scramble in your own endzone.

In the arcade mode you keep playing until your opponent scores against you. And in two player you're playing against a friend on the same device. If anything the game is even sillier when there's two people poking the screen.

Touchdowners feels like the apotheosis of a series of games that started with Wrassling. It captures the essence of a sport, or at the very least it manages to distill American football into a perfect mobile-sized clonk of madness.

If you've enjoyed any of Colin Lane's other games, or if you're a newcomer to his sporting silliness, then you need to pick this up. Trust me, you won't regret it.

Touchdowners is the next physics-based game by Colin Lane, coming to iOS this Thursday