Rome: Total War review - A legion inside your iPad

Porting classic games onto mobile has an unfortunate history of reminding us how badly a lot of games age. It isn't just video and sound that move on: mechanics and accessibility do too.

Just because Total War: Rome is fondly remembered as the greatest Total War doesn't mean it still is. Especially with a raft of potential porting problems standing in the way.

Our first barrier is the controls. The big draw of Total War games are the huge, historical real-time battles. Real-time strategy doesn't have a great record on touchscreen. But Total War has a secret weapon: the pause button. 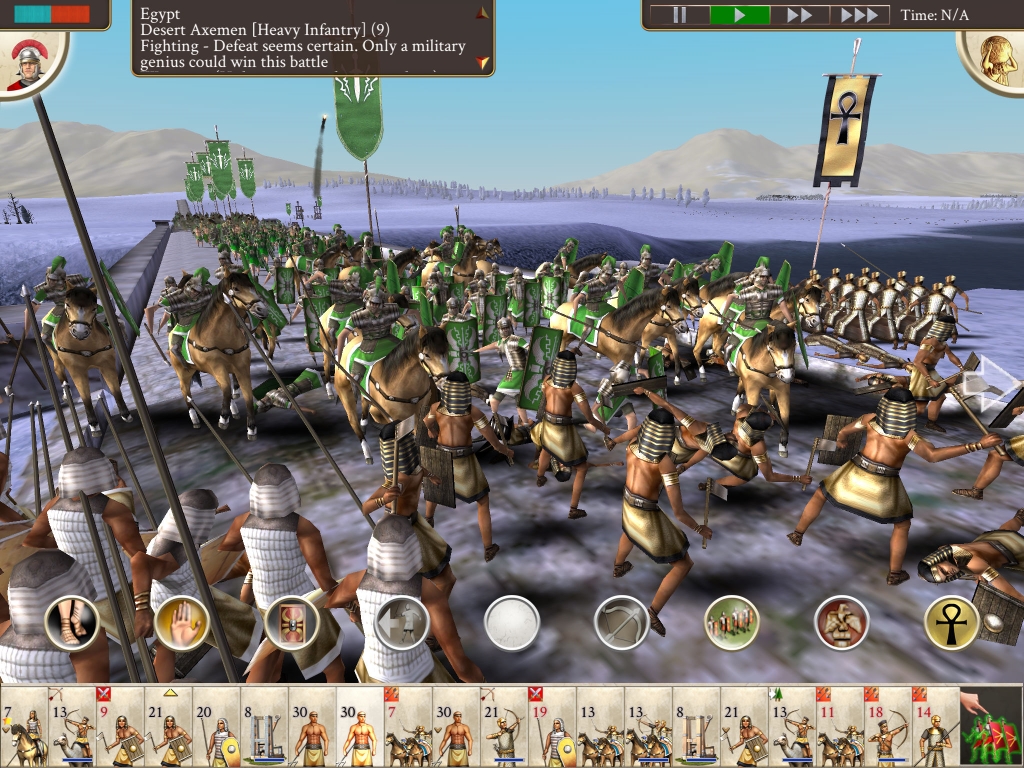 In the heat of the action, you can select and direct single units or your whole army with ease. You can also select multiple units by holding down on the screen and drawing round them which is near-useless.

With the pause facility in the top-left, though, it doesn't matter. You can just stop the fighting, wander your eye over the field and issue new orders to anyone out of place.

Veterans of the series on PC will find you need to pause a lot more often than usual. But that's a small price to pay to get such an astonishing package on your iPad.

Battles are an incredible marriage of visual spectacle and tactical nous. The game rewards sensible use of combined arms. Set spears will triumph against cavalry charges, archers are deadly at range but crumble in close fighting.

It also encourages you get round the flanks and rear of enemy units to make them break and rout quicker. There are siege engines for breaking sieges and silly faux-fantasy units like German Screeching Women. 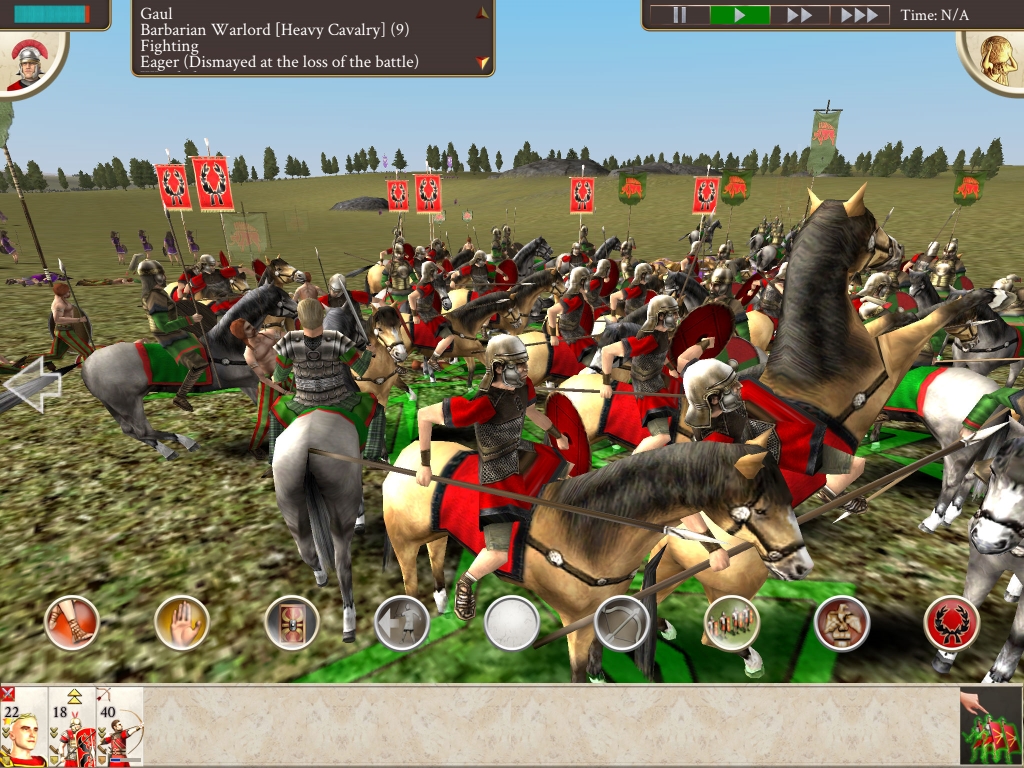 Terrain plays a key role too, especially bridges and escarpments. It's tempting just to select everything in your army and charge in, but doing so is suicide against a roughly equal force.

With skill and cunning you can beat superior armies. Equally, lack of forethought can see you defeated by weaker ones. Battles ebb and flow and need you to make tweaks and decisions on the fly.

Total War: Rome's legacy rests on another successful marriage. That of the tactical and strategic layers. Although you can play single battles and historical scenarios, most fights happen inside the campaign.

This is a turn-based system which puts you in charge of a noble Roman family. From modest beginnings you'll build and grow your cities, research technology and expand your empire. The goal is to become Roman emperor and conquer most of the world.

Anyone that's played a civilisation style game will be at home here. And the experience is as addictive as ever it was, nurturing your digital world and watching it grow.

Except more so, because every fight isn't a quick animation of icons smashing in to each other. It's a whole battle you can control, if you wish, or set to resolve instantly if you don't.

At this level there is naval transport and warfare too, although you can't control sea battles in real-time. Your choices make a real difference, splitting and building armies between aggression and defence.

You can even manage your family tree and their retinues of followers, indeed it's essential since only family members can lead your armies. 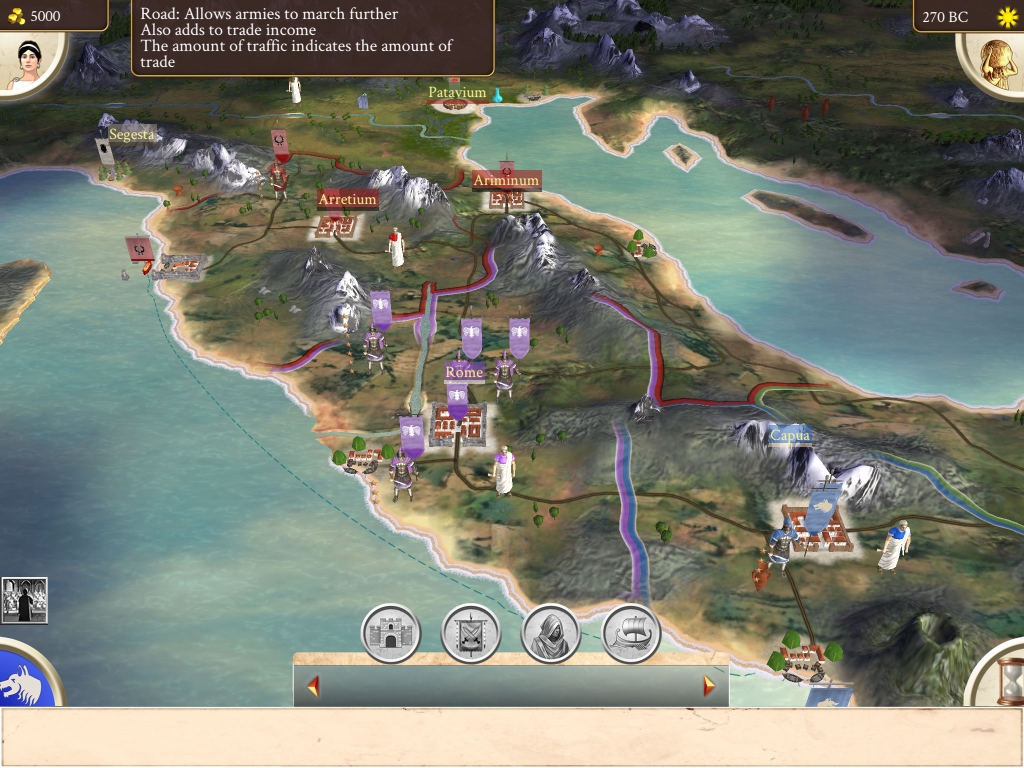 If you don't want to fight, you can take less violent options. There are chances to negotiate alliances and trade deals, and to build political units like diplomats and spies. Soft power isn't a guaranteed route to victory, but it can help.

All this has, of course, been part of the Total War franchise on PC for years. But there's almost nothing on mobile that can match this for scale and depth.

Watching hundreds of legionaries scale ladders and leap into melee atop the wall of a Greek city state on your iPad screen is just incredible. It's even had a facelift. Textures are a little better than the 2004 PC original, and resolution is much sharper.

Unfortunately, other aspects of the game haven't had a modernising overhaul, and show their age. The AI is a solid enough opponent on the field, but it's hopeless on the strategic map.

Units wander back and forth without apparent aim. The player can exploit this in various ways like quick strikes on undefended towns, or avoiding undesirable battles.

The overblown, annoying tutorial from the original is still intact, too. As are the mouse-driven menu structures in the interface. And the app is a little prone to crashes. The auto-save feature makes this a minimal problem, but it's still annoying. 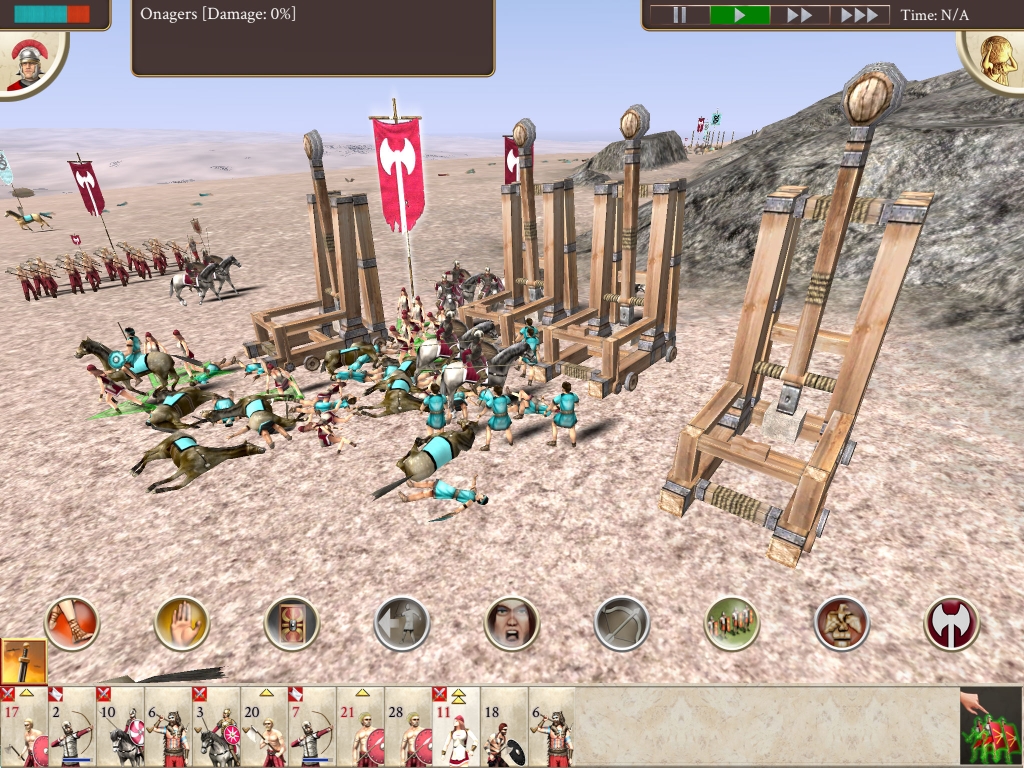 Against these flaws, the enormous gravity of the scale, compulsion and tactical challenge of the game wins easily.

Since Rome was released, the mechanics behind Total War have not seen significant change, they've just had iterative facelifts. That's because what was a brilliant system in 2004 is still brilliant now, whatever platform you choose to play on.

Want more? Check out our 20 other ROME: Total War articles!

Impressive on every level, strategy and tactics, scale and presentation, despite the odd rough edge from porting
By Matt Thrower
| Nov 14, 2016 |
iOS
Find out more about ROME: Total War