Okily dokily: Check out 500 Simpsons episodes at once in this 360 degree video

Regrettably, The Simpsons is past it. A generation's favourite TV show is now making tired jokes and trying to distract you from the fact that South Park is much better.

Let's be fair though - The Simpsons is the same age as me, and has proven to be much better at making people laugh than I have during its 26 years on the air. So why not revisit the classics?

In fact, why not revisit over 500 of them at once? This 360 Video puts you in the middle of a sphere surrounded by different Simpson's episodes playing simultaneously for 10 minutes.

For some people this is a horrific yellow prison, but for others this is a curiosity - I found myself marveling at the different timings for the introductions, and trying to identify different videos while suspended over them like some kind of god was a real challenge.

Maybe I should admit I haven't watched a new Simpsons episode in nearly half a decade.

This'll run on everything so if you've got a Cardboard, Merge, Samsung Gear or even fancy panning around with your cursor and mouse, click below. 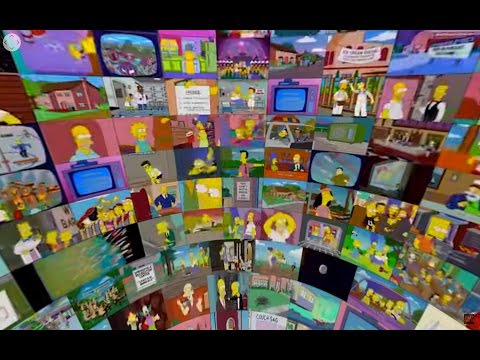 Tip of the hat to Mashable for pointing this one out.

Transform into a fire-breathing dragon in the first content update for Cut the Rope: Magic