I rest my case

Aviary Attorney is a bird lawyering game, by which I mean, it's about a falcon who is a defence attorney. You could say it's a mix of Phoenix Wright and Hatoful Boyfriend.

As Monsieur Jayjay Falcon, it's your job to gather evidence and present a defence case in court.

Your client is Lady Caterline Demiaou, a bourgeoisie kitten who claims to have been framed for murder while at a political banquet. 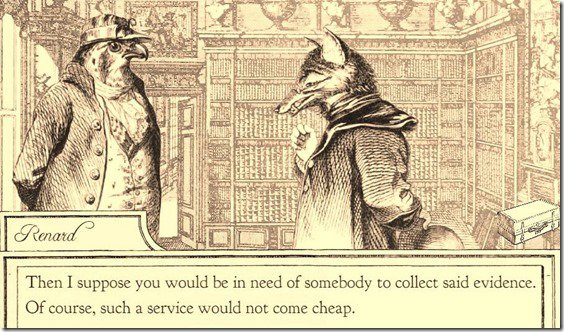 Most of the game is played by observation and tapping through conversations. There will be multiple paths through the game and a number of endings to achieve.

I'm telling you about the game as designer Jeremy Noghani has told me that a mobile port of the game is "very likely."

It will first be released for PC in 2015. So a mobile version won't arrive until after that. But, it seems that we're permitted to get excited about this one.

You can find out more about Aviary Attorney on its website.

Battle for control of your body in Kemco's RPG Revenant Saga, out now on Android