Just when you thought the Super Smash Bros. roster had reached its limits with the additions of Paluntena and the Mii characters - Nintendo unveiled another surprise for us at E3.

Yes, Bandai Namco's most famous icon apparently "hungers for battle" as he was announced as the latest character to join the Smash Bros. fracas.

From what was shown at the closed-door press event, Pac-Man's looking distinctly modern in his design - although he assumes his original, floating pie chart incarnation for jump attacks and some smashes.

Also, he can attack with flying sprites, eat pac pellets, and cycle through familiar fruits to get buffs. 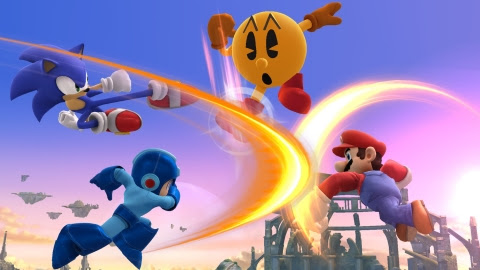 As exciting as the announcement of Pac-Man as a playable character on both the 3DS and Wii U was, however, it paled in comparison to what followed from Masahiro Sakurai himself.

For the first time in the Smash Bros. series history, players will have the ability to adjust their character's stats and combat prowess.

While you'll be able to equip characters with gear that tweaks their strength, defense, and speed, you'll also be able to select from three different special attacks for each direction - one normal, one fast and weak, and one slow and powerful.

This brings the total number of possible specials per character up to a mighty 12, although Sakurai noted that you can only use characters with customized specials in the 'With Friends' multiplayer mode.

Interestingly, Sakurai also note that Mii Characters and Palutena would be exceptions to this new trend as their specials won't work in the same way that normal, traditional specials will.

Unfortunately, he did not clarify this point.

What he did clarify, however, was how equipment would factor into the customization.

Each Smash Bros. fighter will be able to equip a few pieces of gear that will affect their Strength, Defense, or Speed.

There's no uber-gear to be had, however, and any piece that increases one stat will decrease another - so you'll need to build your character wisely to fit your preferred play style.

This gear can be found most readily in a 3DS-exclusive challenge mode called Smash Runs, which pit players against time or difficulty challenges. Clearing a Smash Run rewards you with new equipment and, we assume, a feeling of accomplishment.

Finally, it was revealed that Mii Characters can wear different outfits and hats.

That counts as a customization, right?

Stop toying with me

The last big bit of news from the event was the announcement that Super Smash Bros. will allow you to transfer customized characters between the 3DS and Wii U versions - using features Sakurai wouldn't delve into - and the fact that players will be able to use Amiibo figures in-game.

These Amiibo characters work via NFC, and will allow players to transfer a customized Amiibo version of a character into a game as Figure Player (FP)-controlled character instead of a CPU character.

Amiibo characters can be leveled up to be much more powerful than the previously-brutal level 9 CPU AI - and they'll also learn to adapt to your preferred fighting tactics.

So if you like to shield yourself to avoid damage, for example, your Amiibo AI will eventually learn to throw you to break your shield.

The upside to this is that you can use Amiibos as more than just brutal training partners, and you can fight alongside them in team battles as well.

Sakurai noted that "most" of the characters in Super Smash Bros. will become figures, and that figures from other franchises might make their way to the game.

So far, we've seen Samus, Donkey Kong, Link, the Wii Fit Trainer, Princess Peach, Yoshi, the Villager, Pikachu, and Mario as Amiibos – which is more than enough characters to tide us over.

And on that note, Sakurai also set the record straight on the differences between the 3DS and Wii U versions of the game - both versions will feature the exact same roster of characters, but the stages will be different.