1Path reminds me of those wire loop games that test how steady your hand is.

You know the ones. Yep, a buzzer goes off if you touch the wires.

1Path is a little like that. Instead of handling a length of wire, though, here you're tilting your iPad through mazes chock-full of deadly lasers.

There's a bit of a story at the beginning of the game that is soon forgotten.

In essence, though, you're a green circle that is rejected by others of your kind. These 'others' then run into a colour-consuming beast.

This is just a way to emphasise the need to touch all of the white circles in the levels, in truth. Oh, and to connect them in the right order while doing so. 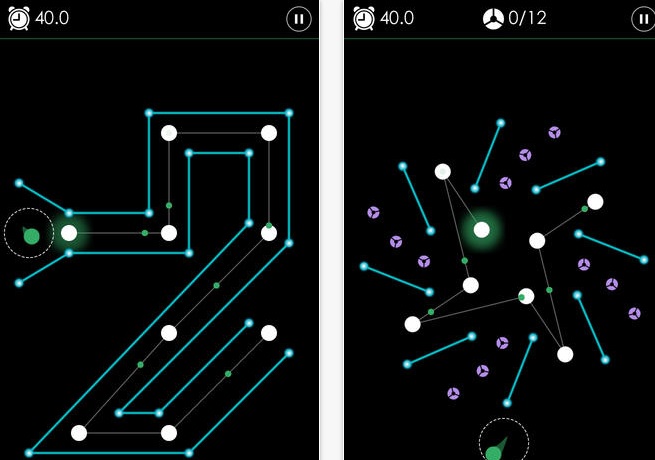 What makes 1Path worthy of your attention is the variation in the levels. You'll be carefully tilting through rows of lasers and arcs. Sometimes, the white circles will be scrolling, so you need to be quick.

There are power-ups you can use to help you, such as slowing time and a shield. Given you activate them via buttons at the bottom of the screen, however, you can accidentally tilt right into a laser while reaching for the right button.

1Path is a freebie from the App Store, though, so give it a bash if you're looking to distract yourself from today's events.