If Ubisoft's Gold Award-winning Rayman Jungle Run has remained on your iPhone or iPad Home screen since its release last September, you'll be overjoyed to read that sequel Rayman Fiesta Run is now available to download from the App Store and Google Play.

Rayman Fiesta Run is packed with tons of new levels and power-ups, as well as plenty of new challenges and an all-new food-themed world that you can explore relatively freely.

Ubisoft: One of the key features that sets Rayman Fiesta Run apart from its predecessor, Rayman Jungle Run, is the presence of something we originally included in the recently released console title Rayman Legends: the Invasion levels.

Basically, each level in the game has an alternative version that is far more challenging than the original. These Invasion levels are only available to players who prove their merit and execute a perfect run on the regular level.

This adds an entirely new layer of content for the skilled players, and allows us to keep the core of the game more accessible. The challenge is still there; you just have to prove yourself before being able to take it on.

We have social integration in this new game, too, so now you can see where you stand compared to your friend through the game's new open map structure.

And there are even power-ups available for use in the levels to change the way you play and help those players who are having a rough time finding all the Lums in some of the more challenging levels.

On top of all that, Rayman Fiesta Run takes place in the food-themed world of the Rayman universe, so there are a lot of slippery ice slides, boiling-hot chilli pots to jump over, and even mountains of cake to plough through.

Gone is the Jungle and everything that came with it. Rayman is in new territory now, and the player is going to have to adapt to the new environmental challenges. 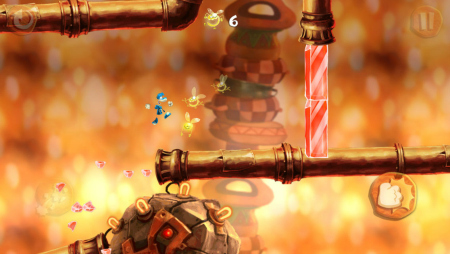 Of which part of Rayman Fiesta Run are you personally the most proud and why?

The world map structure, in particular, is something of which I'm personally proud.

You are no longer locked onto a linear path of sequential levels, which more often than not led to players getting stuck on one level and therefore prevented from discovering the rest of the game.

Now, however, we open up a series of small islands very early on in the game, with each island containing anywhere between one and three levels. This allows you to have a crack at any available level in whatever order you want.

Your progression through the world is entirely dependent on how many Teensies you save in the levels. This lengthens the overall path from island to island.

We wanted the world structure to give players the freedom to explore and find a level that suits their needs now, and hopefully encourage them to come back to the levels they might have skipped once they feel they have the requisite skill level.

Do you plan to extend the shelf life of Rayman Fiesta Run with updates? If so, what content do you have planned?

Yes, of course! For now, we can't give any details on this, but we'll definitely try to make the game richer. 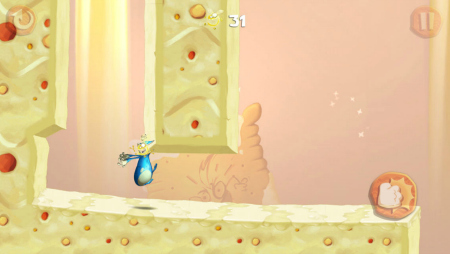 We already know that Rayman Fiesta Run is available on both iOS and Android. On what other platforms will it be released, though?

For the moment, we only plan on releasing it on iOS, Android, and Windows 8.

Rayman Fiesta Run features new power-ups. Which is your favourite?

The Perfect Run power-up is definitely my favourite.

With the Perfect Run, the optimal path for completing a level and obtaining all the collectibles is drawn on-screen. You are also shown the specific moves required to do so.

As a skilled Rayman player, it might sound silly that a power-up which shows me how to collect everything in a level is my favourite, but trust me when I say it doesn't make playing the level any less fun.

It turns the game into more of a rhythmic platformer, where the player simply has to pay attention to the action prompts and press them at the right time.

There have even been times when I've used the Perfect Run power-up but halfway through the level I've completely forgotten to pay attention to it and missed a jump.

It's not some some sort of autopilot that completes the level for you. 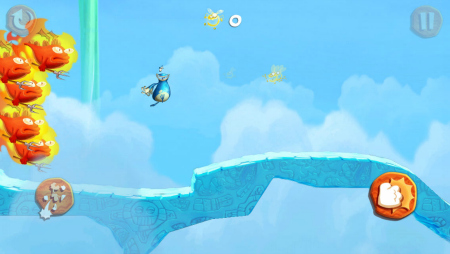 Leisurerules takes free-to-play in a different direction with a donation button in Aliens versus Humans: Missions