This column is called "Crap Apps" for a reason.

So, I thought I'd introduce you to a game whose creator clearly takes nominative determinism seriously: Bad Game by Kylinworks.

Here's the description of Bad Game on its App Store product page:

This particular iPhone game - thankfully free - is a deliberately inflammatory bastard. It looks like it has been made by the sort of satanic 8-year-old that would draw an exuberant spray paint willy on your newly... ahem... erect garden fence.

As if to make obvious the deliberate self-sabotage at play here, the menu screen reads "PALY". The art has been entirely constructed in MS Paint - yes, even the caption boxes - and the entire time you're just waiting for a flagrant large-brush dong to appear on your screen. 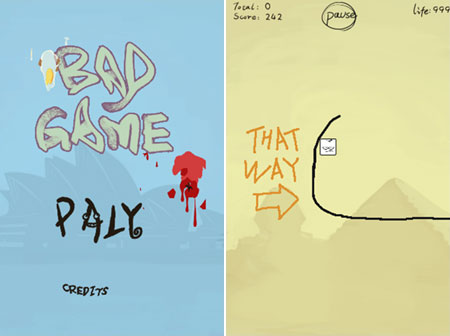 The game itself consists of your tilting your iPhone screen (in portrait orientation only here) left or right to move a permanently jumping constipated-looking square across a series of platforms without falling to your death.

These platforms are actually just floating sentences of distilled sarcasm scrawled over various bizarre silhouettes of world landmarks like the pyramids at Giza and the Statue of Liberty.

The game opens with some text scribbled in the sky that reads, "My name is Rex, tilt to the left". So, you tilt to the left. An arrow is then revealed telling you to go the other way.

This deliberate obtuseness doesn't end there. The HUD displays some score, which I think is calculated by distance travelled but may just be weapons-grade bobbins. And as far as I can tell, you always have 999 lives.

You can walk on the black lines of words, you can't walk on the blue lines of words, and the red words will turn you into a dead little constipated square. Miss the collision, and you plunge to your doom with a chest-arresting scream which has been really annoying my neighbours for a week.

All the while, the word platforms you are bouncing along sarcastically inform you that you are doing very well at the game. Or they're telling you, "haha you're going to die now", "just joking", or something to that effect. 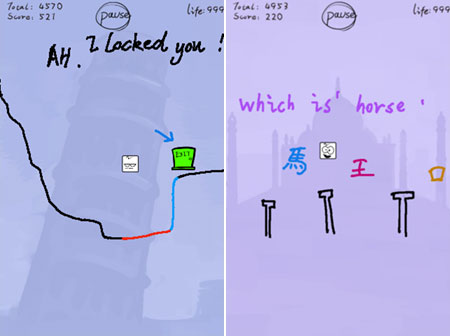 Pretty soon, Kylinworks starts generating platforms out of sentences such as "I am Chinese, I will teach you some Chinese now". After some lame trial-and-error tuition, I am forced to constantly die by making the wrong choice. It's another way of making the player feel totally at Mr Rex's mercy.

One section of the game is called "I like game". It features terrible drawings of images resembling Angry Birds (spelt "Angry Brids") or Plants vs Zombies. Trying to ace the most difficult level is akin to negotiating a room where 20 Bruce Lees are flinging throwing stars at one another.

The tyranny at the core of this game is really interesting. I mean, it's so rare to find a game creator so purposefully and visibly attempting to provoke your annoyance. You can sense the invisible glee the maker must feel every time you drop to your death with that - URGH - piercing scream.

I start to wonder if naming this game 'Bad Game' was just a really clever ploy. By admitting its shortcomings upfront, maybe the dev feels it has more of a licence to irk and vex the player?

Is that what a 'bad game' is? One in which the creator disrespects the player? What about the feeling I get where I want to win simply to show this jerk I am capable of completing his silly game? Does that represent good game mechanics? 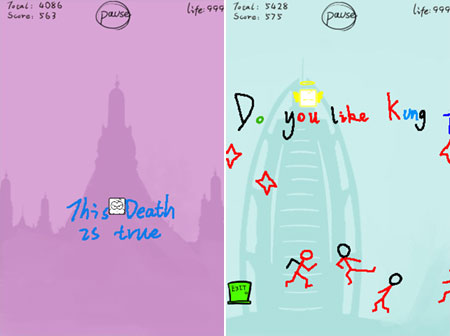 The worst thing is that the MS Paint scrawlings do begin to become endearing after a while. You realise you've been sucked into a narrative where you actually know things about the author by jumping across those primitive scribbles.

This is the simplest version of an autobiographical game. You know, make the platforms your words. Have them literally be obstacles, until you understand their meaning.

In actual fact, the maker of this game is not only silly funny, but is also very convincing. So convincing, in fact, that I have now played the game for far longer than I ever intended or needed to. How has he achieved this? By implying he is judging me.

It's sort of like a game version of the film The Room. So, though the rules for the medium have been understood here, the central character's earnest narrative obscures them.

Also, this game makes you cringe.

Please let me know in the comments section below if you have a terrible iPhone game you'd like me to review. I'd absolutely love to suffer on your behalf.