Simulation specialist Kairosoft has released an unexpected sequel to Pocket League Story, which picked up a shiny Silver Award when it was released back in 2011.

In this footy-focused follow-up, you take the reins of a brand-new up-and-coming soccer team.

Your aim, then, is to recruit and coach current and future stars, while building a wide array of training facilities and attracting punters to your matches.

Like any good sequel, Pocket League Story 2 boasts a bunch of new features not present in its predecessor, including a multiplayer element that enables you to pit your team against other players from around the world.

Unfortunately, Pocket League Story 2 doesn't feature matchmaking abilities. Instead, you and your opponent must swap a nine-digit code before you can start kicking the stuffing out of each other on the pitch. 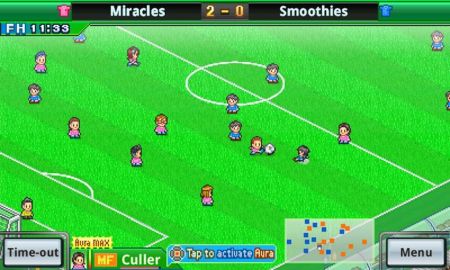 Other new features in this sequel include a dynamic weather system and good ol'-fashioned penalty shootouts.

Like a bunch of Kairosoft's previously released titles, Pocket League Story 2 is available to download for free.

If you want to unlock the full game, however, you'll need to splash out on a single $3.99 in-app purchase.

Battle of the Bulge creator Shenandoah Studio turns to Kickstarter again to raise funds for Gettysburg: The Tide Turns