Speaking on his personal blog, Team Meat co-founder Edmund McMillan describes the monochrome kitty-management game as "a cross between The Sims and Pokemon with a sprinkling of Animal Crossing and a dash of Tamagotchi".

Rather than fire off a list of bullet points describing Mew-Genics's gameplay, McMillan posted a short story which he says best sums up what the game is all about. [You can read the short story in full by clicking on this hyperlink] 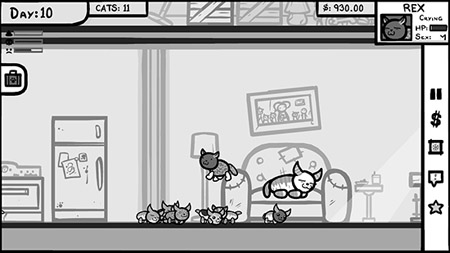 From the looks of things and reading between the lines, Mew-Genics will focus on the process of crossbreeding cats. You will be able to fill a house with randomly generated felines, and then splice the most interesting - or potentially valuable - breeds to create pageant-winning specimens.

Kittens will inherit certain traits from their parents, so a narcoleptic black cat, for example, will beget narcoleptic offspring.

It seems you will also have to manage your cats' violent or anti-social behaviours, such as aggressive parenting and head humping (see image below), and be aware of the omnipresent threat of "cat aids" (no, seriously). 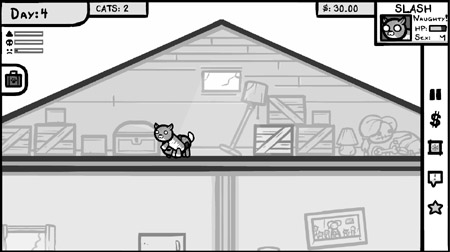 Furthermore, it would appear that the cats in Mew-Genics will be able to learn from their environment, with the house acting as a bricks-and-mortar Skinner box.

To demonstrate this particular Mew-Genics feature, McMillan cites in his short story a tale of the cat who was kicked while eating. This mid-meal violence caused the cat in question to associate food with trauma. As a result, the cat refused to eat again, and later died.

You'll also be able to freeze cats for future experimentation, while keeping animal control agencies from meddling in your experiments.

Though we're still a little hazy on the specifics, Mew-Genics is definitely one of the games to watch in 2013. It will be heading to iOS and Android later in the year.