'Some company in China stole my game'

We're used to Chinese counterfeits in the mobile industry, but that's usually in relation to smartphone hardware. One social games developer, however, has had its entire game ripped off.

Point-and-click RPG Cloudstone is a colourful free-to-play Facebook game developed by small Californian studio Playsaurus. We covered the game's launch back in June.

It seems skulduggery is afoot, however. The Cloudstone developer has revealed on Reddit that its game has been stolen and resold for the Chinese market.

You'll need an account to play the game in this form, but then you should really be playing the original, anyway.

"About a week ago, we discovered our game was on a Chinese network," the sorry tale begins. "They took our files, reverse-engineered the server, and hosted the game themselves with Chinese translations."

Indeed, the Chinese thief didn't even bother to tinker with much of the artwork to avoid detection. Just check out the similarities: 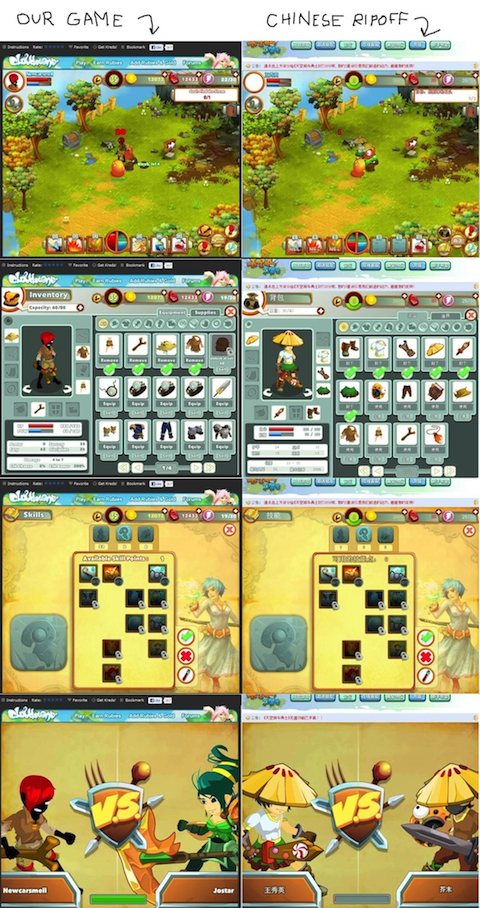 "They stole years of our hard work," the developer continues. "We have no idea how many users they have or how much money they're making, but they have a pretty high rating on that site and they might be profiting off the stolen game more than we are."

Playsaurus says that it's talking to its lawyers, but doesn't know if or when the issue will be resolved.

In the meantime, if you fancy playing something "like Diablo, but with brighter colors, and in Flash," be sure to accept no imitations.